Display on mobile devices is one area where we’ve seen considerable improvement. Pixel density has gone up, contrast ratios have improved, and the emphasis on low power in a platform gated by its battery size means there’s always innovation happening.

In the case of the Nexus 5, there’s a considerable jump in resolution, from the WXGA 1280x768 display on the Nexus 4, to the now-standard 1080p. The biggest change is an obvious shift in aspect ratio from 15:9 to 16:9 once more. Back with the Nexus 4 and Optimus G, I noted just how surprisingly noticeable that extra 48 pixels of width was. Although we tend to think in absolute display resolution and talk about it quite a bit, Android uses display independent pixels or dips in order to keep layouts display density agnostic and support a wide variety of screen sizes and resolutions. Nexus 5 implements the 480 ppi or xxhdpi screen density, whereas Nexus 4 implements 320 ppi or xhdpi density. The result is that the Nexus 5’s display is 360x592 dips in size, compared to 384x592 dips for the Nexus 4, coming in 24 dips narrower. It’s important to note however that this change is intentional to maintain Android’s DPI independence, even if it does mean less overall real-estate in apps and browser.

Display quality is a big deal in the Android space, with lots of variance between devices. In the case of the Nexus 5, I started by tracking down the display type. If you recall, 5-inches with 1080p is a resolution we’ve seen before in the Droid DNA and Butterfly. From what I can tell, the Nexus 5 uses a very similar evolved version of that panel, a JDI (Japan Display, Inc) 1080p display with in-cell touch courtesy Synaptics ClearPad 3350 solution. 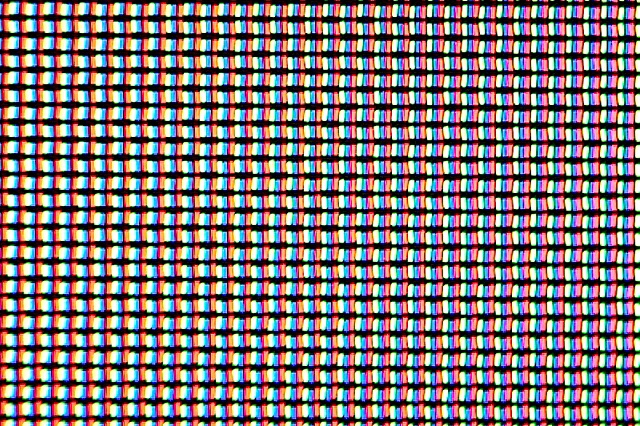 The other question was whether Nexus 5 also uses a PSR (Panel Self Refresh) type display. This display is indeed a MIPI command mode panel, the same kind of system, so yes it does include those features. An additional change is the addition of software vsync in Android 4.4, which to my knowledge the Nexus 5 does use, you can see this pop on and off depending on what’s happening on-screen if you monitor surfaceflinger. Those improvements should decrease latency and improve how sticky animations feel.

To characterize display quality and accuracy, we turn to our usual display measurements. 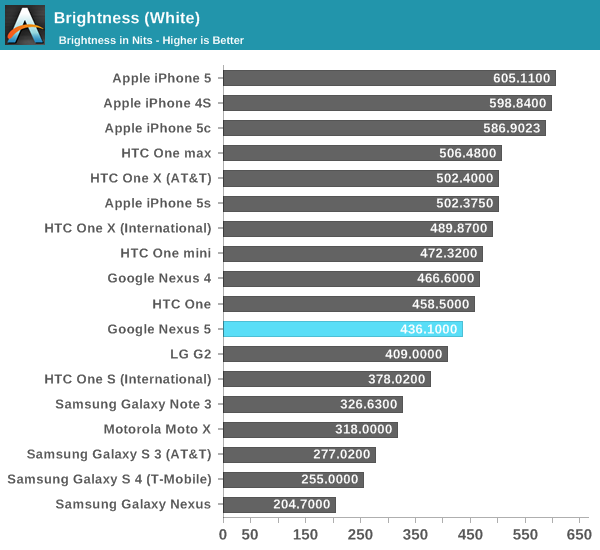 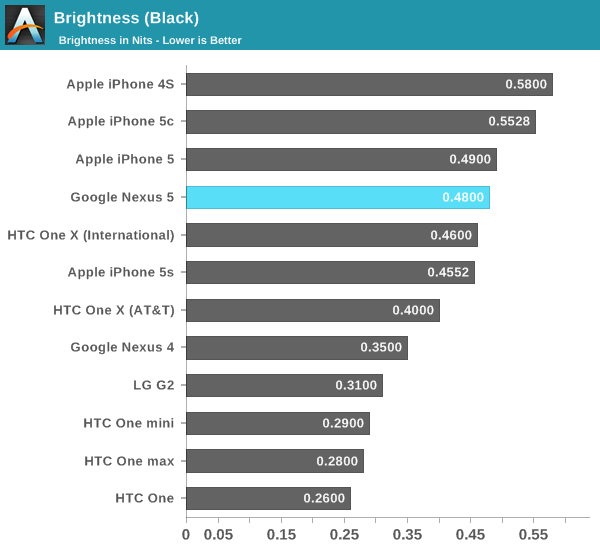 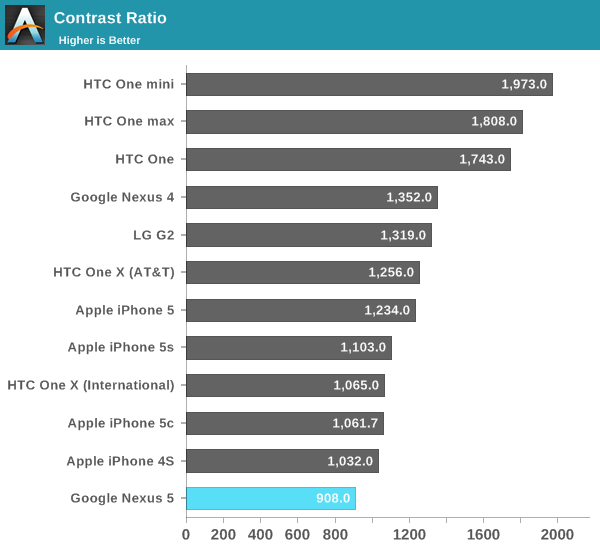 The Nexus 5 doesn’t go quite as bright as Nexus 4, but it’s still a very bright display. Blacks and contrast are a bit disappointing though, contrast is definitely on the lower end, but not bad. I definitely haven’t been put off by them. I also haven’t noticed any of the distracting dynamic brightness behavior I have on other handsets, which is awesome.

My only criticism is that I wish Nexus 5 would allow its auto screen brightness algorithm to go dimmer when in dark scenarios. There’s still more dynamic range in the manual brightness setting bar than there is for the auto brightness routine from what I can tell. 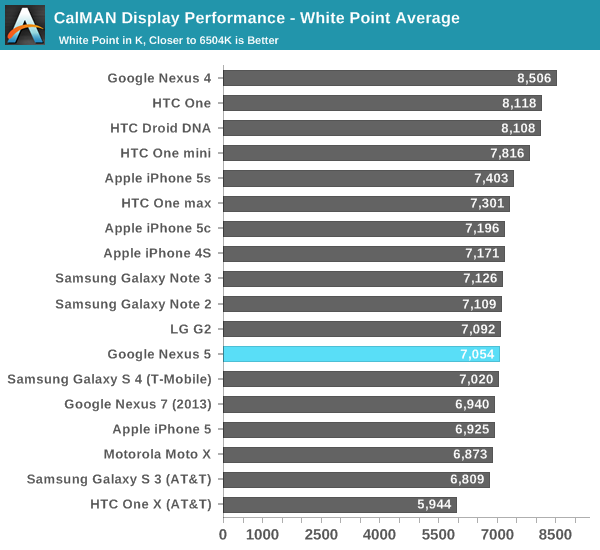 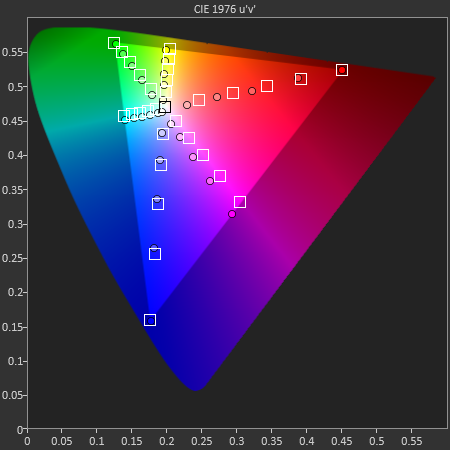 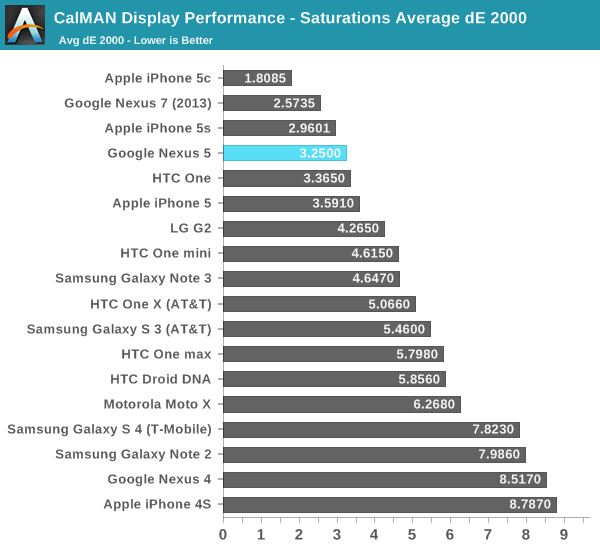 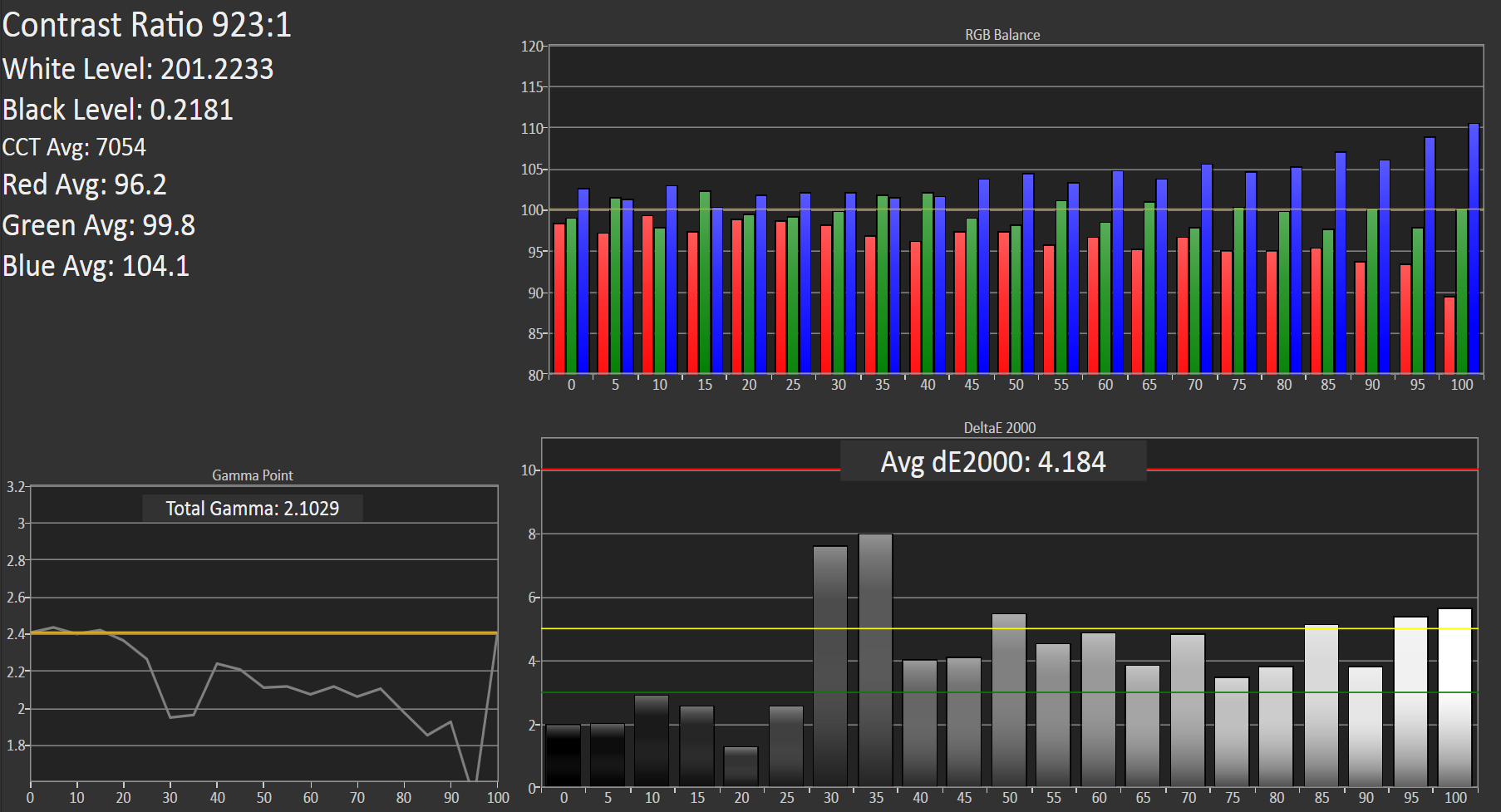 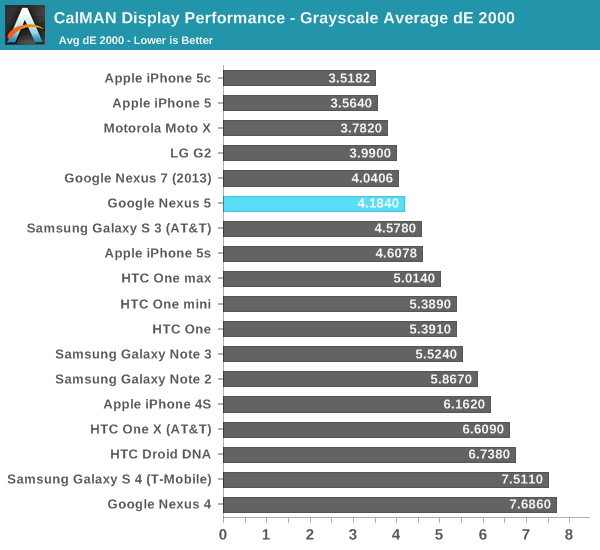 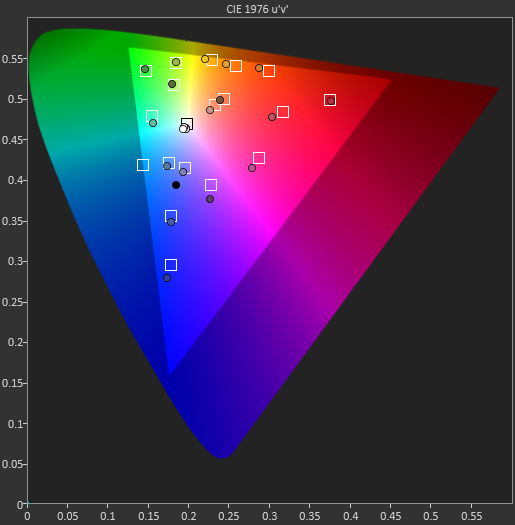 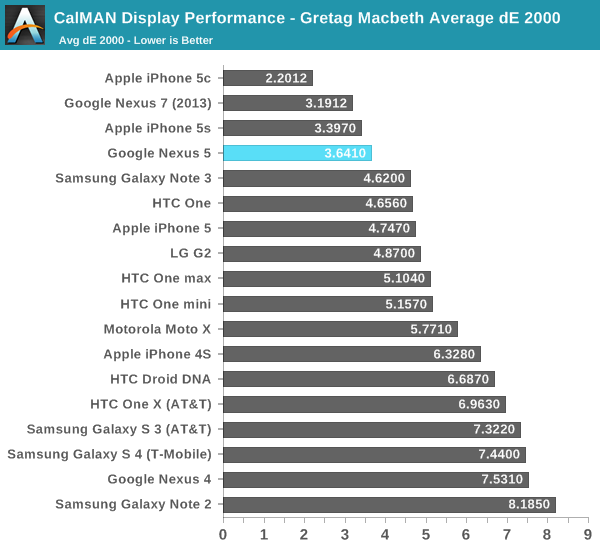 The new Nexus 7 impressed me with how accurate its display was in terms of color reproduction, beginning with Google stating it targeted sRGB (the color space for both the web and Android) calibration for it. The Nexus 5 seems to have done the same, and wowed me with the best GMB color checker Delta-Es we’ve seen from any Android handset. In addition, the Nexus 5 has none of the saturation boost that’s sadly quite pervasive right now, instead giving the right evenly spaced saturation stepping on its color channels. The Nexus 7 has slightly lower Delta-E, but it’s clear to me that Google has made color calibration an emphasis on the Nexus line.

It’s interesting to hear some Nexus 5 users complain that the display seems undersaturated, since that kind of end user feedback reflects subjective comparison. It also suggests to me that a large percentage of the population doesn’t know what some colors or system elements actually should be. Even for me, looking at the green elements inside the Google Play store on the Note 3 in movie mode or Nexus 5 initially seemed slightly more muted than normal. The reality is that this is what they actually should look like. We’ve just become accustomed to their oversaturated appearance on virtually every other device.

This kind of expectation about what looks right and what doesn’t is rather telling for the state of display calibration in Android handsets, and how OEMs have used oversaturated colors to increase retail shelf appeal. Unfortunately the reality is that oversaturated colors do seem to win taste tests among shoppers, the same way that TVs in most big boxes do. We’ve been looking at them for so long that well calibrated displays like Nexus 5 initially do look noticeably different.

The end result is easy to sum up, however – Nexus 5 has the best calibrated display I’ve seen so far in any Android handset. It’s also leaps and bounds more accurate and controlled than its predecessor display in the Nexus 4.