As we found out in our latest Socket-A Chipset Comparison, the AMD 760 chipset is actually a very impressive chipset.  AMD has come a long way since the days of the AMD 640 (which was actually the VIA VP2 in disguise) to the point where they are a very capable chipset designer even though they still refuse to take the next step to become a manufacturer as well. 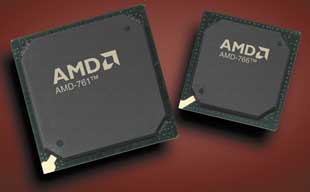 This brings up the first problem with the AMD 760 chipset: it isn't a high volume product.  This unfortunately means that it is a more expensive solution to produce, and it also means that motherboard manufacturers are less likely to adopt and promote designs based on the chipset due to its relatively limited production nature.

In mentioning the first problem with the AMD 760 chipset, we actually introduce the second issue with the AMD 760 chipset, which is the problem of cost.  AMD 760 based motherboards already require the use of 6-layer PCBs (the more layers, the greater the cost) as opposed to the 4-layer PCBs manufacturers were able to get away with using the KT133/A chipsets.  This fact alone scared away quite a few motherboard manufacturers, such as ABIT, that find it very hard to swallow the added cost of producing a 6-layer board in an already very tight profit margin market.

Luckily, from a performance and feature set standpoint there aren't any problems with the AMD 760 chipset.  If you'll remember the 760's predecessor, the AMD 750 chipset, not only did it not offer support for PC133 SDRAM but it also had numerous AGP performance issues under Windows NT.  The 750 did not support AGP 4X, however we all know the usefulness of that over AGP 2X in real world situations.

So while the 760 doesn't have the same shortcomings as its predecessor in terms of performance and feature-set, it does share the same Achilles heel in terms of cost which is what allows solutions like the KT266 to be so attractive.