Moving on to clockspeeds, we find that the GTX 780 Ti does very well when it comes to boosting. With a maximum boost clock of 1020MHz, we have 2 benchmarks averaging 1000MHz, and another 4 averaging 980MHz or better. 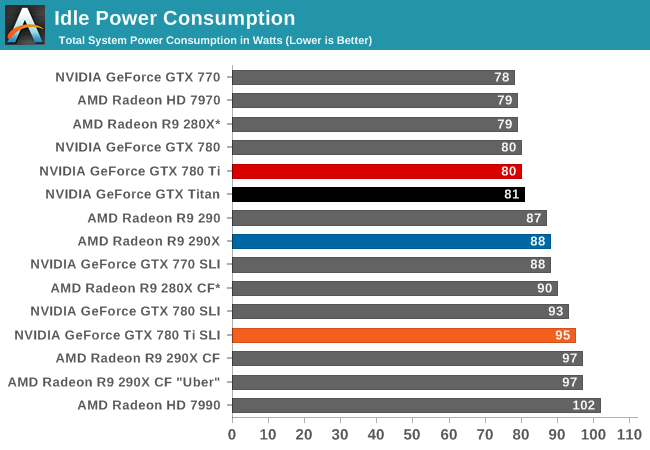 With all of our GK110 cards sharing a common design, at idle there’s very little to differentiate them. Other than GTX Titan’s extra 3GB of VRAM, we’re essentially looking at identical cards when idling. 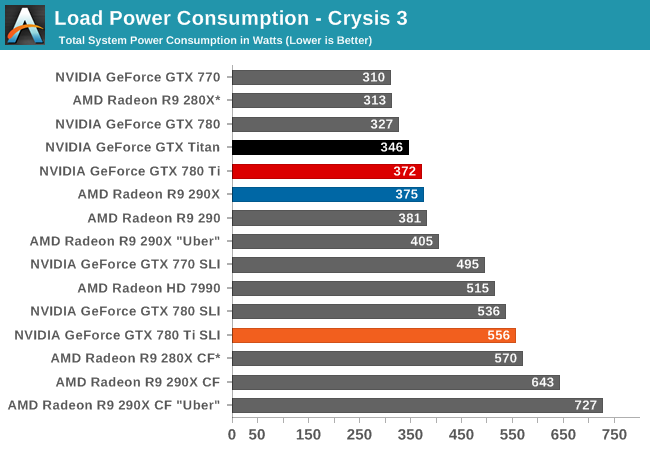 Moving on to load power, we can see the power/heat ramifications of the slight clockspeed increase coupled with the activation of the 15th SMX. Even with the further optimizations NVIDIA has put into the new revision of GK110, power consumption has gone up in accordance with the higher performance of the card, just as we’d expect. Since NVIDIA doesn’t notably alter their power efficiency here, that increased performance has to come at the cost of increased power consumption. Though in this benchmark it’s worth pointing out that we’re measuring from the wall and that GTX 780 Ti outperforms GTX Titan by 8%, so some of that 29W power difference will come from the higher CPU load caused by the increased framerates. 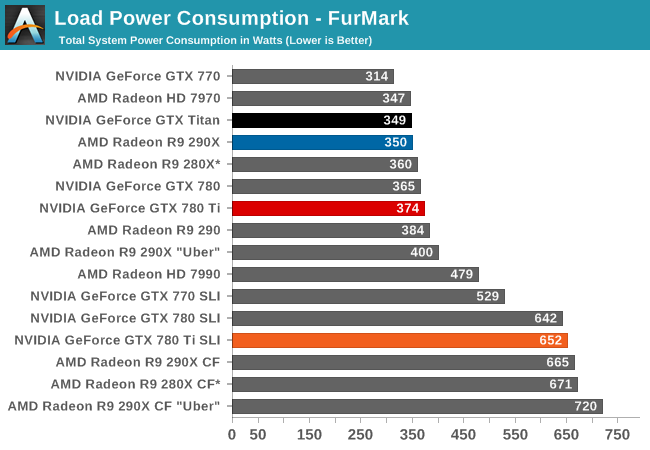 Switching over to FurMark, we find that power consumption is also up, but only slightly. With GPU Boost 2.0 clamping down on power consumption all of our GK110 cards should be clamped at 250W here, and with a difference between GTX 780 and GTX 780 Ti of under 10W, that’s exactly what appears to be happening here.

On a side note, it’s interesting to note here that under FurMark we’re seeing the GTX 780 Ti draw more power than the Radeon R9 290X. Despite the fact that the 290X has a higher rated TDP, in the card’s default quiet mode the card can’t actually dissipate as much heat (and thereby consume as much power) as the GTX 780 Ti can. 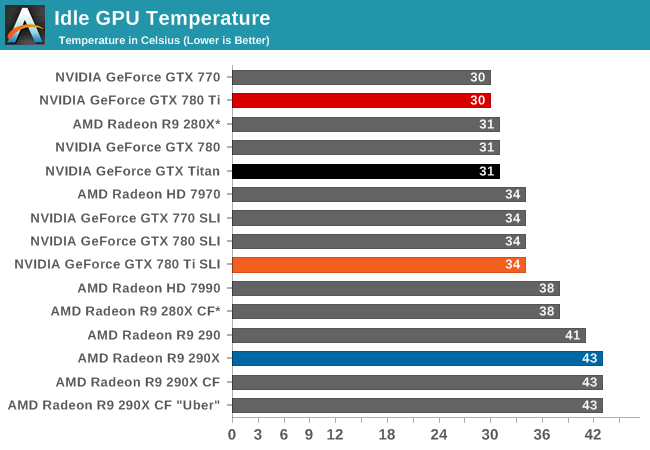 For idle temperatures we’re once again looking at cards that are for all intents and purposes identical. At 30C the GTX 780 Ti easily stays nice and cool. 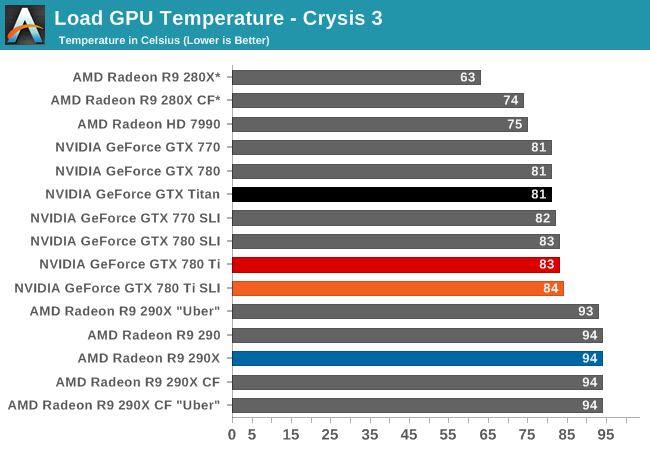 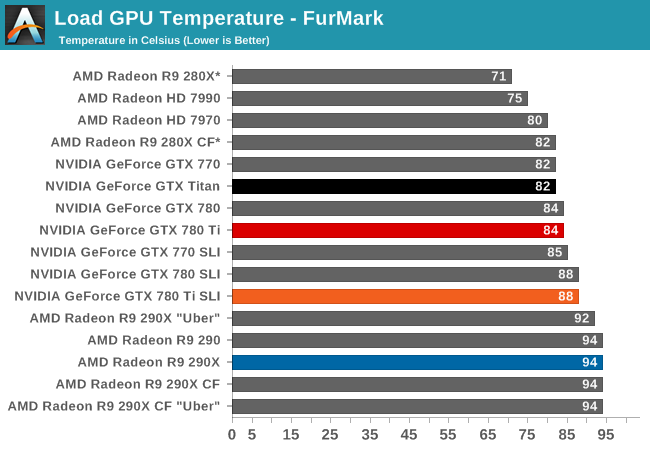 FurMark reiterates what we saw with Crysis 3. The temps are up a bit across the board, while the GK110 cards are holding near their throttle points. The SLI setups meanwhile approach the upper-80s at 88C, reflecting the fact that even with blowers, there’s some impact on neighboring cards in high load situations. 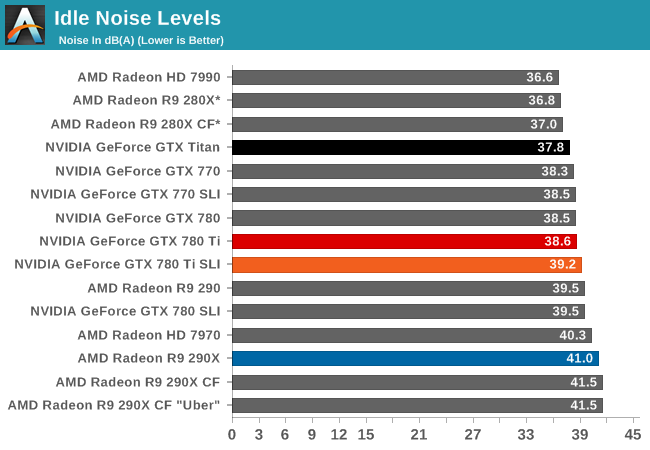 Our last idle scenario, we once again see all of our GK110 cards performing similarly, with idle noise levels in the 38dB-39dB range. 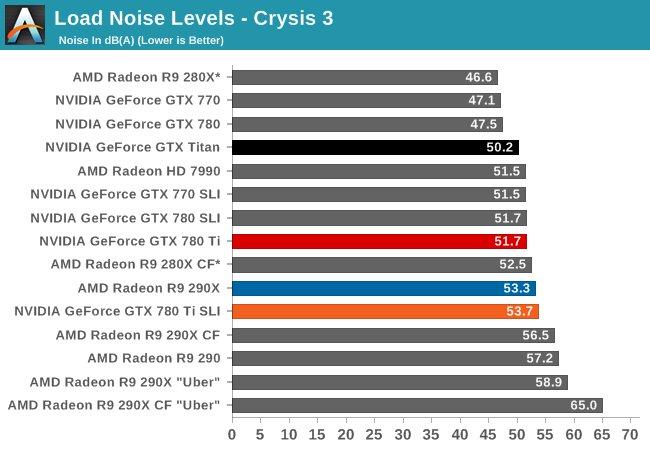 Moving on to our gaming load noise results, we can see the full repercussions of the GTX 780 Ti’s higher average power consumption coupled with the card’s higher temperature throttle point. Moving the throttle point along the same curve has the end result of moving higher the equilibrium point and thereby the card’s operating noise levels. As the fastest single-GPU card on this card, the GTX 780 Ti is still doing very well for itself and for a blower based design at 51.7dB, though at 1.5dB louder than GTX Titan and 4.2dB louder than GTX 780 the noise tradeoff for the card’s higher performance is very clear. Meanwhile the fact that it’s tied with the GTX 780 SLI comes with its own bit of irony. 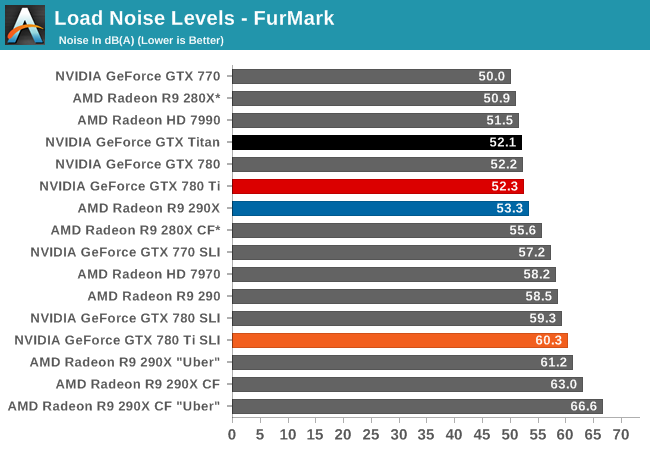 Finally with load noise levels under FurMark we can see where our various cards will peak at for noise levels. The GTX 780 Ti creeps up to 52.3dB, essentially tying with the GTX 780 and GTX Titan. Otherwise it comes in just behind the 290X, and the start of the pack for our multi-GPU setups.

As for the GTX 780 Ti SLI, like our single-card comparison points its up slightly as compared to the GTX 780 SLI.

Overall, our look at power, temperatures, and noise has been a rather straightforward validation of our earlier suspicions. GTX 780 Ti’s higher performance leads to higher power consumption, and will all other factors being held equal – including the cooler – power, temps, and noise levels all rise a bit as compared to GTX Titan and GTX 780. There’s no such thing as a free lunch here, and while GPU Boost 2.0 will keep the maximum levels suitably in check, on average GTX 780 Ti is going to be a bit worse than the other GK110 cards due to those factors. Though even with the increased noise levels in particular, GTX 780 Ti is still able to outperform 290X on noise while also delivering better gaming performance, which makes this another tidy victory for NVIDIA.