Since the iPad Air uses the same A7 silicon as the iPhone 5s, it also uses the same on-die GPU as the 5s: IMG’s PowerVR G6430. This is a 4-cluster configuration of IMG’s latest graphics hardware, running at some relatively high frequency. I already went into some detail on the G6430 in our 5s review so I won’t rehash that here, but we’re basically looking at a shift to a more efficient scalar architecture.

I still don’t have confirmations of clock speeds, but I believe we’re looking at a max GPU clock of around 450MHz. As you’ll see from the results below, there’s a small difference in performance between the iPad Air and iPhone 5s in terms of peak GPU performance - implying very similar clocks. The difference is the iPad Air should be able to sustain its max frequency longer than the iPhone 5s can.

Since we’re talking about an A7 here and not an X-series SoC, there’s still only a 64-bit wide memory interface. As memory bandwidth is a key enabler of GPU performance I was curious to see how GPU performance compared to the outgoing iPad 4 with its much wider memory interface. Do keep in mind that the A7 does include a large system cache on-die, which can help improve effective memory bandwidth.

We'll start our GPU performance analysis with a look at low level results using GFXBench/GLBenchmark 2.7. The low level tests, particularly the offscreen ones, should give us some idea as to whether or not there's any increase in GPU frequency for the iPad Air vs. iPhone 5s implementations of A7. 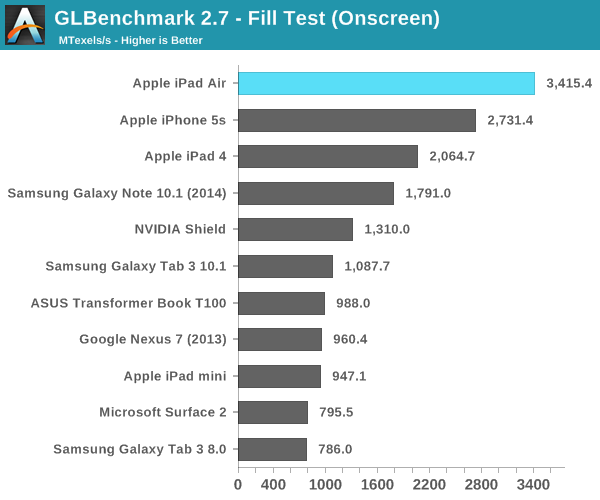 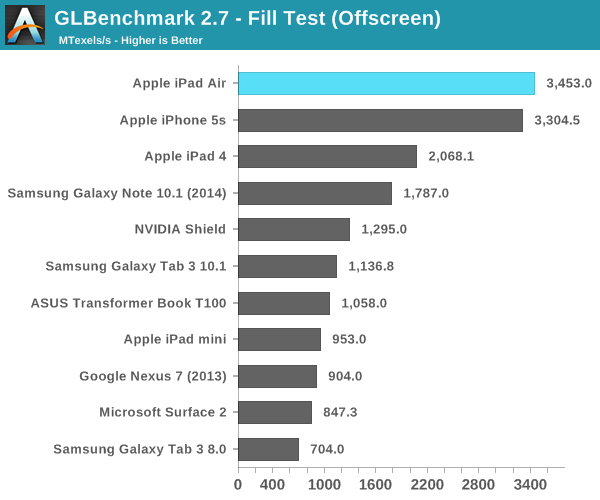 Looking at the fill rate results, there's a 4.5% increase in performance compared to the iPhone 5s. That could be the magnitude of clock increase that we're seeing between A7s. Apple could very well be relying on more thermal headroom in the iPad Air to provide any real world GPU performance advantages over the iPhone 5s. 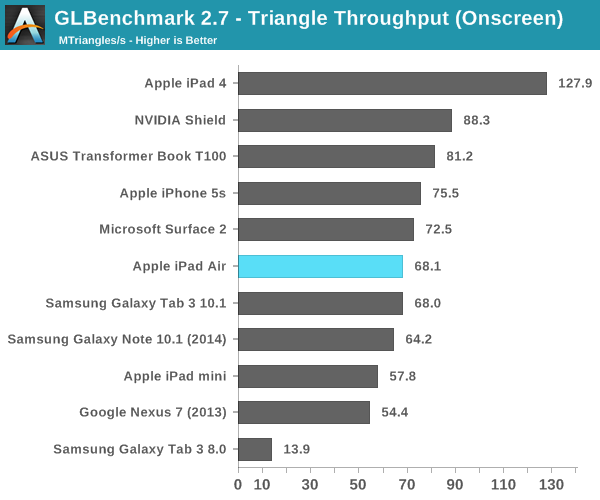 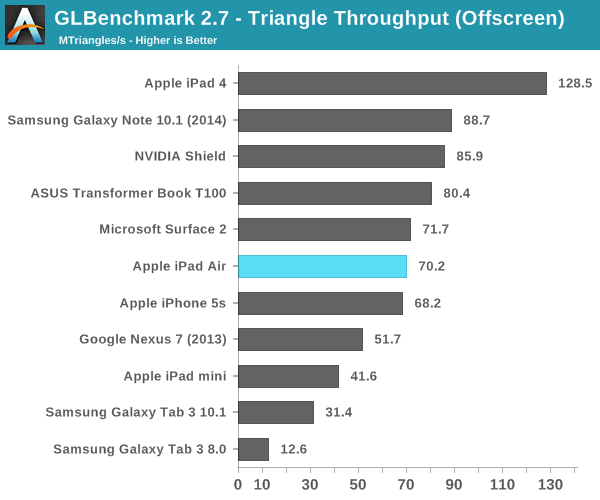 We see an even smaller gap between the Air and 5s in the triangle throughput tests (2.9%). There doesn't seem to be any substantial difference in GPU frequency between A7 implementations here. The regression in triangle rate performance compared to the iPad 4 is explained by differences in how Series 6 and Series 5XT GPUs scale in width. Whereas 5XT replicated nearly the entire GPU for "multi-core" versions, multi-cluster versions of Rogue only replicate at the shader array. The result? We don't see the same sort of peak triangle setup scaling we did back on multi-core 5XT parts. I'm not sure I'm particularly happy with the magnitude of the regression here, but I haven't seen any real world cases where it matters yet.

Next up are the game simulation tests. We'll start with the more strenuous of the two: T-Rex HD. 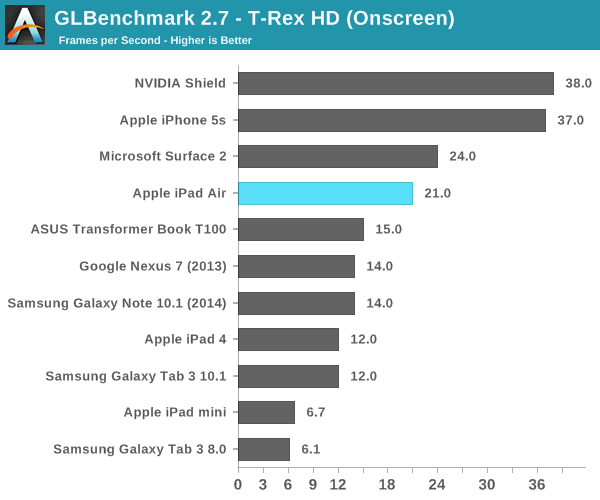 Here we get closer to Apple's claims of a 2x increase in performance. The iPad Air delivers 75% more performance than the iPad 4 in this test. Once again the iPhone 5s pulls ahead but that's because the onscreen tests render at display resolution, which is lower on the 5s. 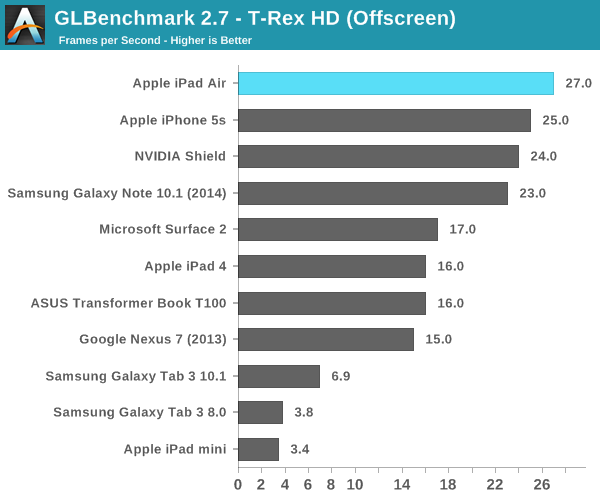 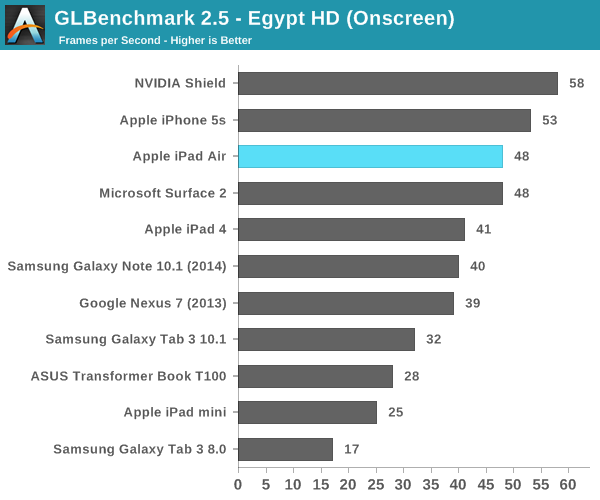 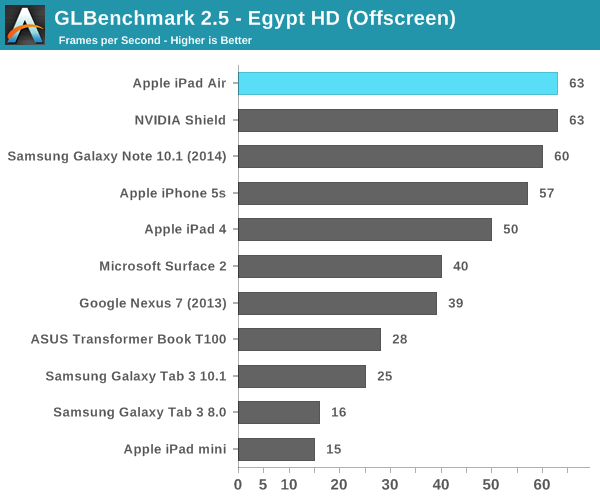 We're once again running 3DMark's newest Unlimited mode which does its best to run independently of v-sync and at a standard resolution across all devices. I've also included 3DMark Extreme results below that feature a few more comparison points. 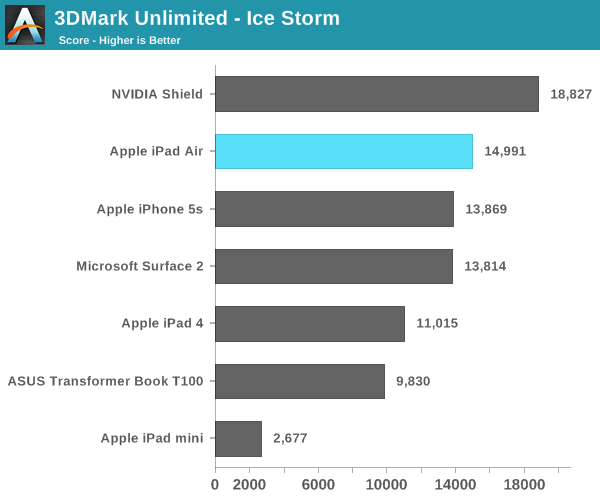 The overall Ice Storm scores show a 36% improvement in performance over the iPad 4 and an 8% increase compared to the iPhone 5s. Given the CPU frequency advantage of the A7 in the Air vs. the iPhone 5s, I'm guessing that's why we're seeing the performance gap we are here. 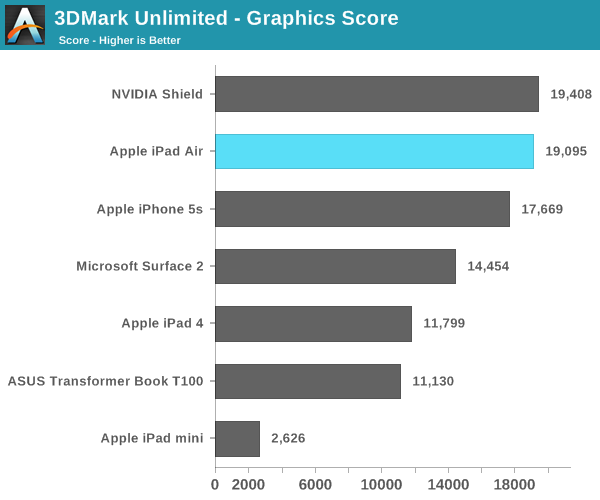 If we focus exclusively on the GPU tests (which themselves are still CPU bound), the iPad Air's performance advantage over the iPad 4 grows to over 60%. 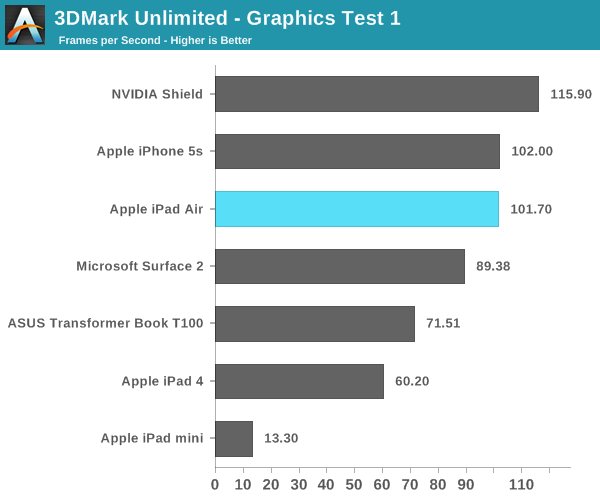 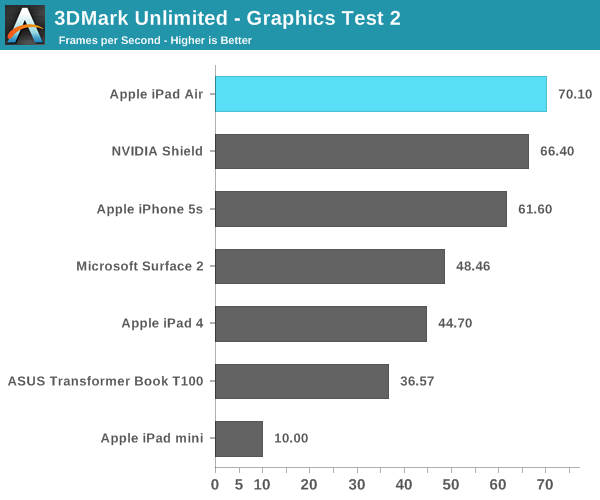 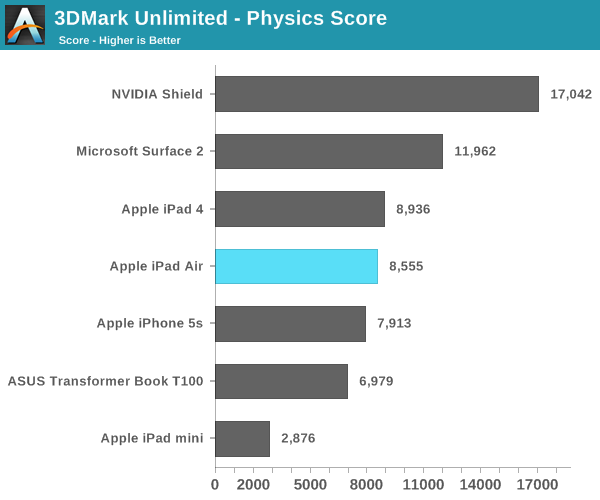 I'm still not entirely sure what's going on with the 3DMark Physics test, but we've seen this two reviews in a row now where Cyclone showed no performance increase at all compared to Swift despite this being largely a CPU test. 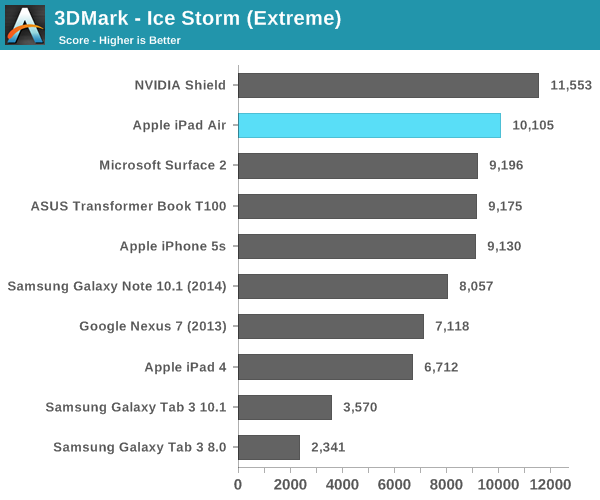 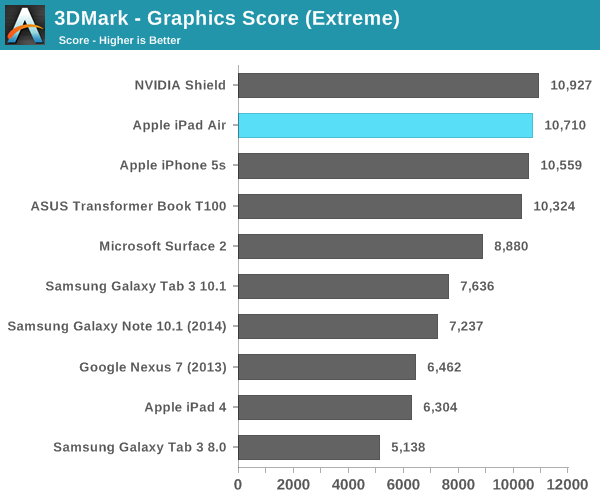 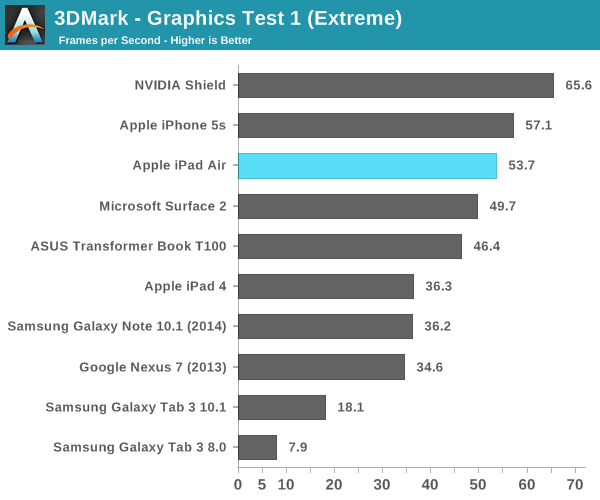 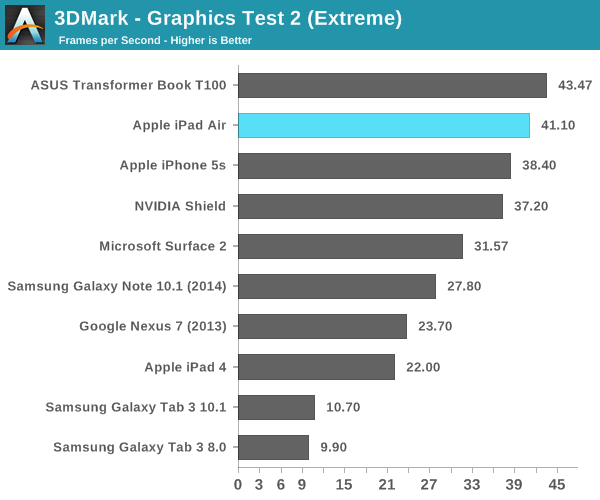 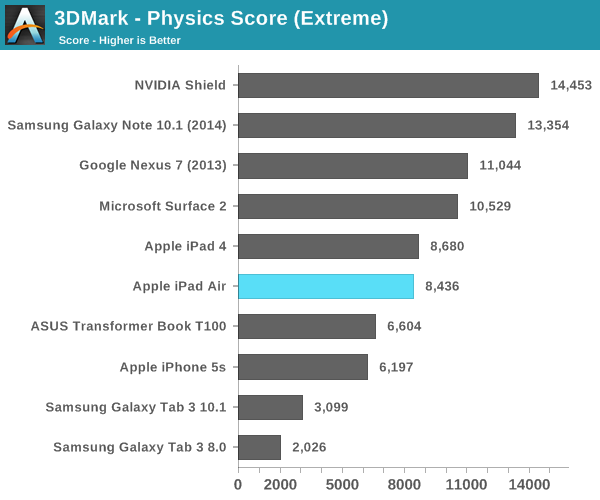 Basemark X is a new addition to our mobile GPU benchmark suite. There are no low level tests here, just some game simulation tests run at both onscreen (device resolution) and offscreen (1080p, no vsync) settings. The scene complexity is far closer to GLBenchmark 2.7 than the new 3DMark Ice Storm benchmark, so frame rates are pretty low.

I'm still having random issues with Basemark X reliably running both on and offscreen tests on iOS 7. Unfortunately I could only get onscreen results for the iPad Air, which came in at 46% faster than the iPad 4. Note the iPad mini and iPhone 5s benefit from having lower native resolutions here, which is why they perform so well. 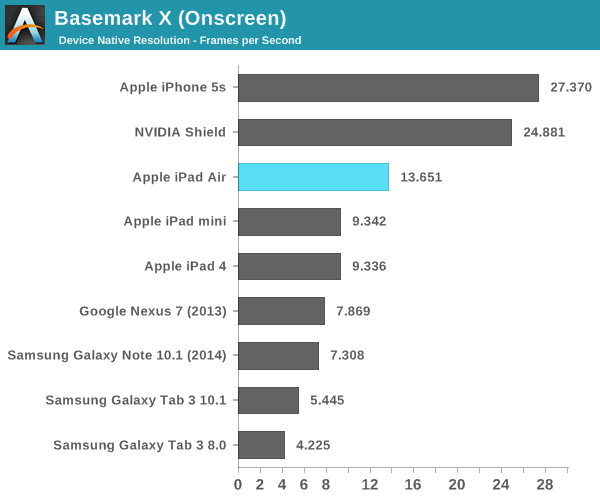