It’s tough to sell an entry-level Windows PC these days. You’re sandwiched between a couple of aggressive price points: the Nexus 7 at $229 and the iPad at $499. Traditionally, the PC you’d get between those price points would have mechanical storage, the cheapest of cheap TN panels, be bulky as possible, an unimpressive keyboard/trackpad and have 2.4GHz-only WiFi. About the only solace would be that it’d have some insanely quick Core architecture CPU inside, which more or less didn’t matter since the overall experience was hampered so much by the spinning disk inside. Thankfully, times are changing.

Assault first and foremost comes from Google’s latest lineup of Chromebooks. The HP Chromebook 11 addresses many of these concerns but with a fairly limited OS and silicon that’s honestly a bit too slow, even for the target market. But you do get an awesome keyboard, eMMC based storage, and an IPS panel among other things. 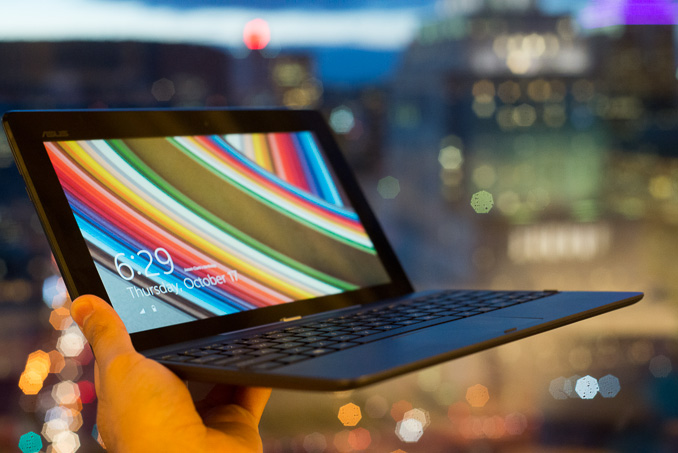 The Transformer Book T100 is really the Wintel camp’s answer to the Chromebook onslaught. Compared to the traditional entry-level PCs out there, the T100 really is a breath of fresh air. You get an IPS panel, great battery life and modern WiFi all in a package that can work as both a notebook and a tablet. The system is responsive and predictable in its performance thanks to the use of solid state storage. While there isn’t a full blown SSD inside, the eMMC solution is clearly better for light consumer workloads than a mechanical disk. Solid performance from the rear facing speakers and excellent portability round out the T100’s package. If I had to compare it to what you’d normally expect to get from a $349/$399 Windows PC, I’d say the Transformer Book T100 is a clear winner.

Where things get complicated is if/when you start comparing across platforms. ASUS and Google set the standard for affordable color calibrated displays with the 2013 Nexus 7, and unfortunately the T100 comes no where close to that. Even HP’s Chromebook 11 delivers a more accurate out of box experience than the T100. Again, the T100’s display isn’t bad, it just desperately needs a factory calibration.

It’s important to keep the T100’s performance in perspective. For light multitasking or single app-use workloads, the T100 does very well (much better than the Chromebook 11 we just reviewed). Light browsing and document work are at home on the T100. Don’t expect it to be a Haswell replacement though. I would like to see the gap narrow between Intel’s Atom and Core lines, but I’m afraid it’s going to take real performance pressure from a competitor before we ever see that day.

The dock experience on the T100 is reasonable, but it’s clear to me that the Transformer Book T100 is first and foremost a tablet, and only serves as a clamshell device as a secondary function. That’s not to say it makes for a bad notebook experience, it can just be cramped as a result of the 10.1-inch display footprint. If you’re looking for a device that you’ll use mostly as a tablet but want the flexibility of turning it into a notebook when you need to, the T100 can definitely fit the bill. If your desire is primarily for a touchscreen notebook, then the T100’s tradeoffs may be more frustrating. 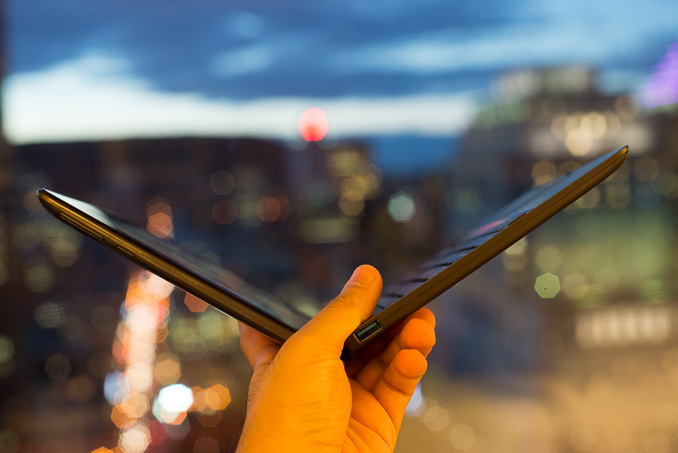 At the end of the day the T100 is a good device, but like the Chromebook 11 we recently reviewed it could’ve been amazing with a few tweaks. With a less reflective display, color calibration at the factory and a better feeling keyboard/trackpad I’d be absolutely in love with the T100. I also wonder if 10.1-inches is the right form factor for this sort of a device. I’m not sure that Microsoft’s decision to go with 10.6-inches is the right one either, but the typing experience on a Surface’s type/touch covers does feel remarkably less cramped.

The T100 truly lives up to the Transformer brand. The combination of Intel's Bay Trail silicon and ASUS' mechanicals gives the device a dual personality. In tablet mode it's just as portable as any other 10-inch tablet, while in clamshell mode it can be a netbook-style ultraportable PC. I’d love to see ASUS continue down this path and truly try to perfect the device. I look at the work that ASUS and Google do together and can’t help but wonder what the T100 would look like if it had the same sort of pressure/influence. Perhaps that’s a bigger criticism of how Microsoft works with its partners, but I look at the comparison of ASUS tablets with and without Google’s influence and try to imagine a further polished Transformer Book. That’s something I’d really like to see.

There are very few perfect computing devices out there, but ASUS is one of the companies with the ability to build one if it really tries.