Although AMD doesn’t have new GPUs to show off today, that doesn’t mean their various hardware groups have been sitting by idle. Even with their existing hardware AMD can make at least some small changes via firmware and drivers, and this is something AMD’s Display Technology group, led by AMD Fellow David Glen, has been working on for the 200 series.

There won’t be any HDMI 2.0 support here (sorry guys, that needs new hardware) but they’ve been working on making improvements to Eyefinity surround setups. As is well known about the 7000 series, it was limited to 2 independent TMDS interface (DVI/HDMI) displays at once. Unlike the packet based DisplayPort interface, which operates at a single clockspeed and can vary the number of packets sent to adjust the resulting bandwidth, TMDS style interfaces adjust the clockspeed of the interface itself to match the needs of the display. As a result while you can drive a large number of DisplayPort interface monitors off of a single shared clock generator, you need a dedicated clock generator for each and every TMDS interface monitor. AMD only put 2 clock generators for TMDS interfaces on their silicon, hence they could only drive 2 such monitors at once. 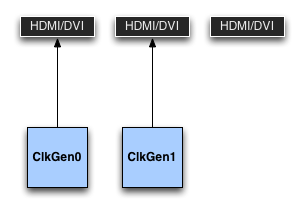 With the 200 series this isn’t changing – it’s the same silicon after all – but AMD has implemented some new tricks to partially mitigate the issue. Thanks to some firmware and board level changes, with the 200 series AMD is now able to attach multiple TMDS transmitters/interfaces to the same clock generator, allowing one clock generator to be used to drive multiple displays. As a result it’s now possible to drive up to 3 TMDS interface displays off of a single 200 series card, albeit with restrictions.

The catch here is that these can’t be independent displays, and this change is primarily intended towards enabling Eyefinity with cheap, DVI/HDMI-only monitors. To utilize clock sharing and to drive 3 such monitors off of a single card, all 3 monitors must be timing-identical, which functionally speaking almost always requires the monitors to be completely identical. Furthermore the sharing of the clock generator can only be engaged/disabled upon boot, so the 3rd display cannot be hot-plugged and must be present at boot time. Consequently this is by no means as unrestricted and easy as having native support for 3 TMDS interface displays, but for Eyefinity it will get the job done. 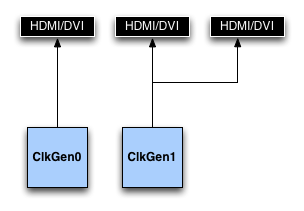 Radeon 200 Series DVI/HDMI Output Options: All 3 Together, As Long As They're Identical

Of course this restriction only applies to using 3 TMDS interface monitors off of a single card natively. Using the DisplayPort, either with a native monitor or through an active DP-to-DVI/HDMI adapter, still allows the same fully independent functionality as before.

Moving on to something a bit more applicable to all Radeon users, as our regular readers are aware AMD is a significant participant in the VESA standards body, the group responsible for the DisplayPort standard. As part of the general trend in consumer electronics, the VESA group has been gearing up for 4K “UltraHD” displays, including rolling out updates for their various standards to better manage the emergence of those displays.

AMD, vis-à-vis the VESA, is rolling out support for VESA Display ID 1.3 in their newest drivers, for availability in the Radeon HD 7000 series and above. Display ID 1.3’s significant addition is that it formalizes support for so-called tiled displays, which implement very high resolutions such as 4K in the form of multiple lower resolution tiles that identify and behave like separate monitors. Tiled displays are atypical for PC displays, which are historically based on a single tile/stream, and for the immediate purposes of the PC industry are something of a half-way house for 4K @ 60Hz on the PC, as timing controllers for monitors to do 4K @ 60Hz natively simply do not exist yet. This is why monitors such as the recently released Asus PQ321 utilize tiles. 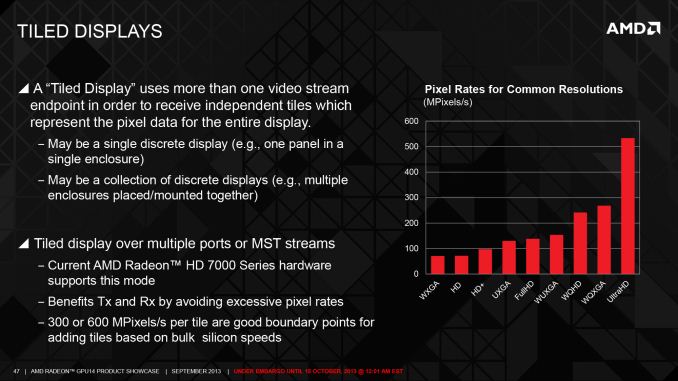 Ultimately tiled 4K displays are a transitionary technology as they’ll be replaced with native (single tile) 4K displays next year when suitable timing controllers hit the market, but in the interim Display ID 1.3 is the formal solution to that problem, along with allowing the VESA to lay the groundwork for future, even larger tiled displays.

To this end, Display ID 1.3 implements support for tiled monitors by adding a new data block to the descriptor, the Tiled Display Topology Data Block. The TDTDB is used by displays and other sink devices to tell source devices about the existence of the tiles, the format/resolutions they use, and the relative positioning of the tiles. Coupled with DisplayPort 1.2, which can carry multiple display streams over a single connector via MST technology, and it’s possible to hook up a tiled 4K display via a single DisplayPort connection, with Display ID providing the necessary data for the video card to make it seamlessly work. 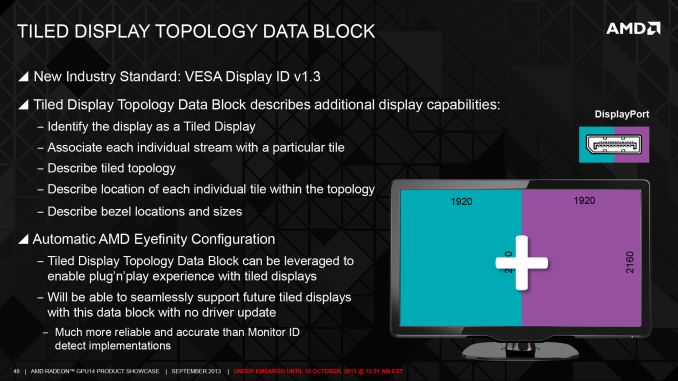 Looking towards the future, AMD has also explicitly mentioned plans for supporting native 4K @ 60Hz monitors in the future, once the necessary timing controllers become available. Curiously only the R9 290 series is mentioned as supporting this mode (note that it’s based on new silicon), but as we’re a year out we’ll see how that goes when the time comes.

Finally, as another improvement coming to the 200 series, AMD’s Discrete Digital Multipoint Audio (DDMA) support is getting an upgrade. First introduced alongside the 7000 series, DDMA allows for audio-capable HDMI/DisplayPort monitors to coexist, and for each to present themselves as an independent sound sink. The idea behind this technology is to enable uses where having discrete speakers dedicated to each monitor would come in handy, such as video conferencing. 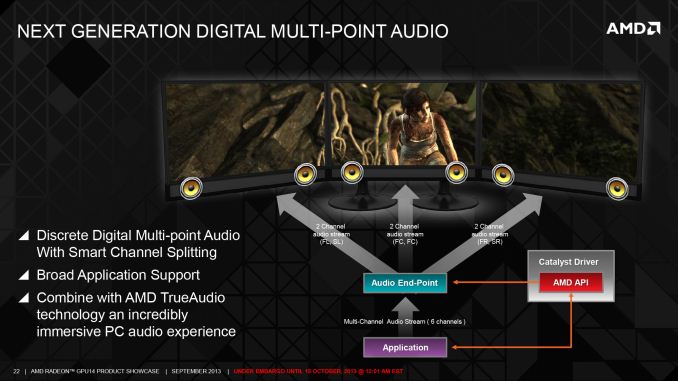 However utilizing DDMA as it originally shipped required software to support sending audio to multiple independent devices at once. Some software supported this and some did not. So as a driver level tweak AMD is implementing an alternative mode where the driver presents a 6 channel setup as a single sink, and then splits up those channels among the actual monitors. The use cases are a bit more limited here – AMD proposes using it for TrueAudio even though no one is going to be positioning a monitor behind themselves – but it’s a simple hack that none the less allows using the speakers from additional monitors in additional cases where the application itself doesn’t natively support it.