Battery life is a huge concern in the smartphone space these days, especially as phones get bigger and more powerful. The Moto X includes a unique 2200 mAh, 3.8 V (8.36 Whr) stacked battery made by LG chem, which maximizes battery volume given the Moto X’s rounded form factor. Motorola was very vocal about the battery life of the Moto X, and made the claim of up to 24 hour of mixed use with the device in addition to up to 13 hours of call time. Given the smaller (albeit AMOLED) display and dual core SoC, the Moto X was an easy target for the narrative that higher end specs and quad core SoCs are killing smartphone battery life, which many immediately latched onto and parroted claims of amazing battery life. 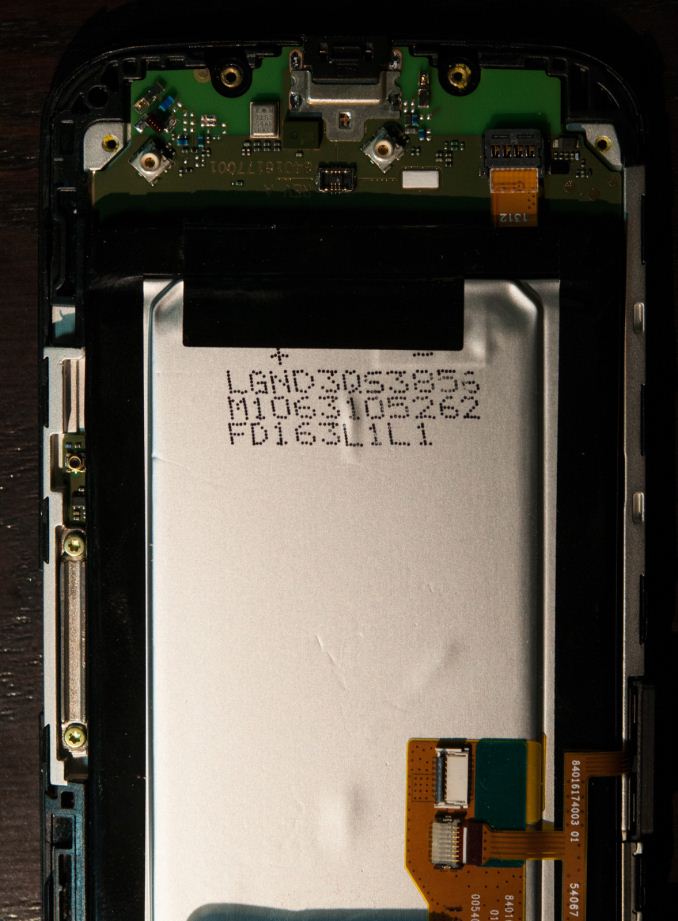 Of course, the real question is how the Moto X stacks up to the competition in our objective tests. I have to admit that my initial subjective impressions of the Moto X battery life were not all that great. My first time daily driving the Moto X was after getting it in NYC and flying home – I left the hotel with it fully charged, spent 4 hours in a plane with it in airplane mode, and Moto X still died in the baggage claim before I could make it home. The second time I daily drove the Moto X, I also managed to kill it doing nothing out of the ordinary before I got back home. I honestly can’t remember the last time I drained a phone completely actually using it. Since those couple of times I haven’t had problems making it through a full day when I’ve daily driven the Moto X, but that’s with my usual opportunistic charging from every available wall socket and USB port, and my mixed use definitely isn’t 24 hours, rather closer to 8.

Our objective battery life tests are unchanged so I’m not going to go through all of it in excruciating detail again – you can read any previous review and get the details. At a high level we calibrate the display to exactly 200 nits, then run through a bunch of webpages with content every dozen or so seconds until the device dies, on both cellular, and WiFi. The call test is self explanatory – there’s voice at both the originating terminal and terminating terminal, and we time how long the call goes for until the device dies. 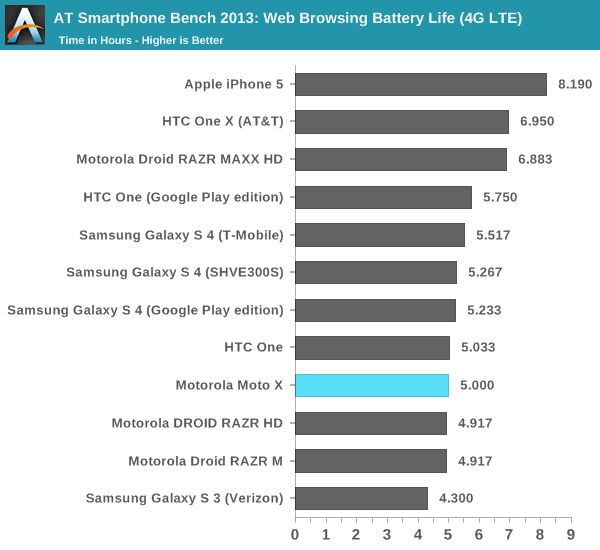 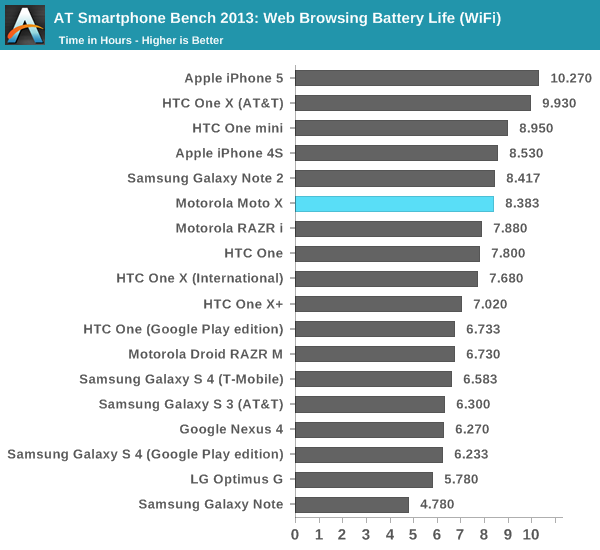 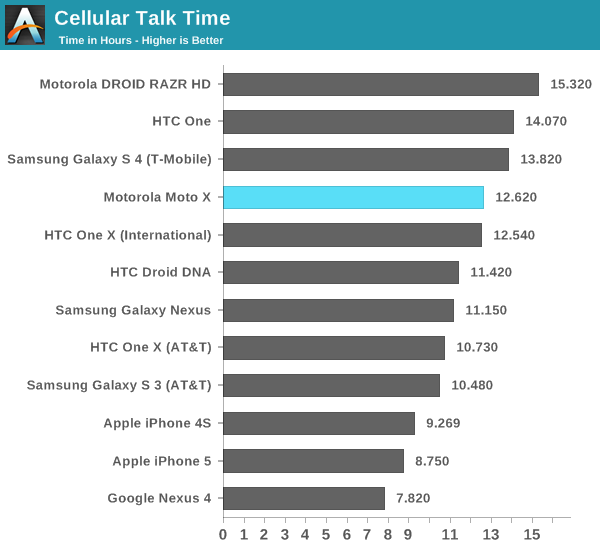 Battery life on the Moto X doesn't turn out to be all that much different from the other flagships based on APQ8064 on LTE. In fact, it's about par. That's not too surprising for me considering compared to the HTC One and SGS4 it's the same CPU (Krait 300) and process (28nm LP). For better battery life we'll need better efficiency, which will come either through newer process (28nm HK-MG variants at TSMC) or even more efficient CPU architecture.

In reality, having fewer cores here means in something multithreaded like our battery test (Chrome is very multithreaded) it needs to send the Moto X's two cores to a higher frequency and voltage state than the four on the other devices. I'm not surprised at all to see invalidation of the "fewer cores translates to better battery life" narrative others have crafted. The only validation is that having two fewer cores does translate to less dynamic range in power use. It all becomes a matter of how you're using the device at that point, however. On WiFi the Moto X does do pretty well, and Motorola has always had very good talk time.

One thing I will note is that the Moto X does have a power saver mode, but it appears to just disable background sync and put the data connection to sleep aggressively. It doesn't change the governor so that the max CPU frequency is lower (say the 1.1 GHz state) like a lot of other OEMs power savers do, which seems like a missed opportunity. 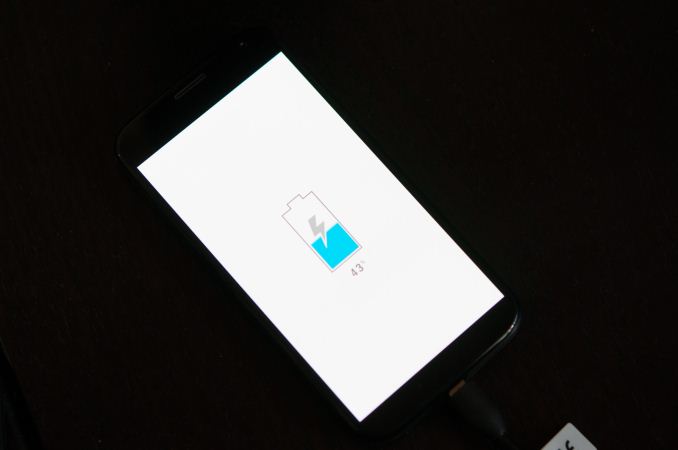 The Moto X comes with a dual-USB port 850 mA charger, like the previous revision of Motorola devices. In practice I've seen the Moto X reliably pull closer to 1 A from the Moto X bundled charger.

What's interesting however is that the Moto X can charge up to the maximum BC1.2 rate of 1.5A. If you use that kind of charger, it charges impressively fast, around 2.3 hours. 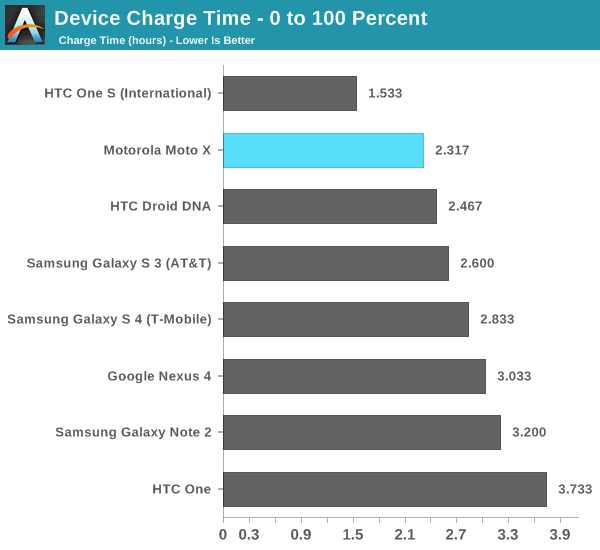