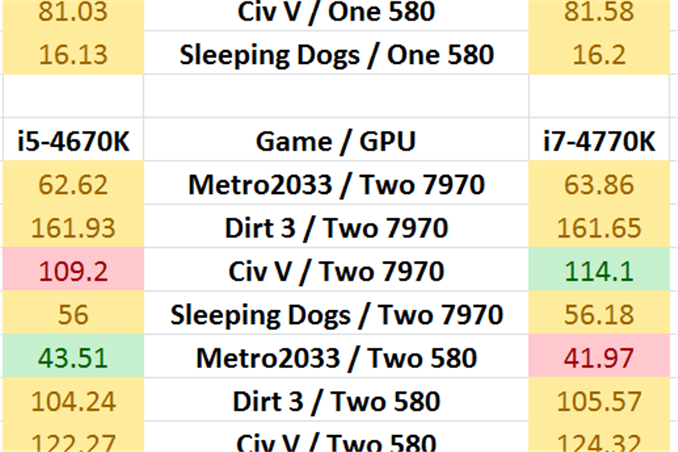 Back in April we launched our first set of benchmarks relating to which CPU we should choose for gaming.  To that list we now add results from several Intel CPUs, including the vital data point of the quad core i5-4670K, some other Haswell CPUs, the new extreme i7-4960X processor and some vintage Nehalem CPUs we could not get hold of for the first round of results.

Many thanks go to GIGABYTE for the loan of the Haswell+Nehalem CPUs for this update and for use of an X58A-UD9.

The i5-4670K provides a salient data point in our testing – the question is always asked about whether having more cores makes a difference.  Hyperthreading allows the processor to simulate extra cores, though sometimes at the expense of single thread speed of the secondary logical threads.  The i5-4670K also lands on the budget side of the equation if we are talking pricing, currently retailing for $240 compared to the i7-4770K which is at $340.  It is often suggested that the i5 overclockable equivalent should offer similar performance, and our inquisitive minds at AnandTech always want to set the important questions straight in our testing.

Alongside the i5-4670K, this update also tests an i5-4430, which at the time of testing is Intel’s slowest quad core part from the initial Haswell release.  We are also waiting for the dual core parts to reach our testbeds so we can run our tests.  We are also testing the ultimate high end processor, the newly released i7-4960X, offering six hyperthreaded cores at a 4.0 GHz turbo frequency.  On the back of our Crystalwell testing, the CPU results from the i7-4750HQ are included, and at the request of some of our readers, I was also able to source a pair of Haswell Xeons for testing – the E3-1280 v3 and the E3-1285 v3.  The difference between these two chips is solely the presence of the IGP on the 1285, which causes the official TDP to be raised by two watts.  For users who need neither overclocking nor an IGP, the E3-1280 v3 is a potential choice with a slightly higher clock speed and all the benefits of a Xeon and with a $50 price difference.

Due to the time it takes to test any CPU for this article, it was near on impossible to go through all previous generations of processors from both AMD and Intel, let alone a wide variety to show where clock speeds and cache levels are important.  However for this Intel update, three 1366 CPUs managed to pass my way for a few weeks.  The top selling i7-920 is part of this trio, along with the i7-950 which acted as a slightly more expensive upgrade and the full-fat i7-990X which is the modern equivalent of the i7-4960X in terms of busting a wallet buckle or two.  The first two in that list are quad cores with hyperthreading, whereas the i7-990X sits as a hexa-core.  Clearly Nehalem (and Westmere) suffer an IPC disadvantage when it comes to Sandy, Ivy and Haswell, but it is important to test where such a ‘performance platform’ sits in the grand scheme of things.

Next update!  I currently several AMD CPUs in to test (Richland, Trinity, even a Sempron or two and a Llano) and have requested at least a half dozen more from various sources (Piledriver dual/quad module, Athlon II X4) as well as a CPU or two from AM2/AM2+.  The Intel testing landed in my office first for testing, and it made sense to split them up into two separate articles.  But rest assured, I hope that FX-6xxx, FX-4xxx and A10-6xxx numbers will be on their way soon.  Of course, the FX-9590 and counterpart is also on my list as and when we can get hold of a media sample.

Your Games are Old and do not Consider Multiplayer!

This is not an uncommon criticism with this article and the format it takes.  In order to be honest with my results, I have chosen titles which have ceased to be boosted by regular driver updates.  Due to the level of testing (one CPU can be 20+ hours including setup, CPU tests and GPU tests) we need a stable platform for comparison.  I go into detail on the next page on our testing procedure, but one important aspect for our testing is consistency and repeatability.  Almost no MP scenario can offer this, while at the same time maintain a throughput of testing to at least remain partially relevant.

My next big update for games and drivers will be in 2014, hopefully with a GPU update.  I hope this will entail more thorough testing (minimum FPS + average FPS), along with updates from our 580s to something powerful and PCIe 3.0 on the NVIDIA side.  We are currently looking at Bioshock Infinite/Tomb Raider as possible avenues, and a couple of other titles look interesting.

Format Of This Article

On the next couple of pages, I will start by going through the reasons for this article.  Many of the reasons are the same as the previous Haswell Update, but for consistency and clarity it makes sense to at least repeat them for new readers coming to read the results.

I will also list in detail our hardware for this review, including CPUs, motherboards, GPUs and memory.  Then we will move to the actual hardware setups, with CPU speeds and memory timings detailed.

Also important to note are the motherboards being used – for completeness I have tested several CPUs in two different motherboards because of GPU lane allocations.  We are living in an age where PCIe switches and additional chips are used to expand GPU lane layouts, so much so that there are up to 20 different configurations for Z77/Z87 motherboards alone.  Sometimes the lane allocation makes a difference, and it can make a large difference using three or more GPUs (x8/x4/x4 vs. x16/x8/x8 with PLX), even with the added latency sometimes associated with the PCIe switches.  Our testing over time will include the majority of the PCIe lane allocations on modern setups – for our first article we are looking at the major ones we are likely to come across.

The results pages will start with a basic CPU analysis, running through my regular motherboard tests on the CPU.  This should give us a feel for how much power each CPU has in dealing with mathematics and real world tests, both for integer operations (important on Bulldozer/Piledriver/Radeon) and floating point operations (where Intel/NVIDIA seem to perform best).

We will then move to each of our four gaming titles in turn, in our six different GPU configurations.  As mentioned in the next page, in GPU limited scenarios it may seem odd if a sub-$100 CPU is higher than one north of $300, but we hope to explain the tide of results as we go.

This will be an ongoing project here at AnandTech, and over time we can add more CPUs, indepth testing, perhaps even show an extreme four-way setup should that be available to us.  The only danger is that on a driver or game change, it takes another chunk of time to get data!  Any suggestions of course are greatly appreciated – drop me an email at ian@anandtech.com.