The high level testing methodology remains unchanged from our S3700 review. Unlike in previous reviews however, I did vary the percentage of the drive that I filled/tested depending on the amount of spare area I was trying to simulate. The buttons are labeled with the advertised user capacity had the SSD vendor decided to use that specific amount of spare area. If you want to replicate this on your own all you need to do is create a partition smaller than the total capacity of the drive and leave the remaining space unused to simulate a larger amount of spare area. The partitioning step isn't absolutely necessary in every case but it's an easy way to make sure you never exceed your allocated spare area. It's a good idea to do this from the start (e.g. secure erase, partition, then install Windows), but if you are working backwards you can always create the spare area partition, format it to TRIM it, then delete the partition. Finally, this method of creating spare area works on the drives we've tested here but not all controllers may behave the same way.

Thanks to the EVO's higher default over provisioning, you actually get better consistency out of the EVO than the 840 Pro out of the box. Granted you can get similar behavior out of the Pro if you simply don't use all of the drive. The big comparison is against Crucial's M500, where the EVO does a bit better. SanDisk's Extreme II however remains the better performer from an IO consistency perspective.

Zooming in we see very controlled and frequent GC patterns on the 1TB drive, something we don't see in the 840 Pro. The 250GB drive looks a bit more like a clustered random distribution of IOs, but minimum performance is still much better than on the standard OP 840 Pro.

Our performance consistency test actually replaces our traditional TRIM test in terms of looking at worst case scenario performance, but I wanted to confirm that TRIM was functioning properly on the EVO so I dusted off our old test for another go. The test procedure remains unchanged: fill the drive with sequential data, run a 4KB random write test (QD32, 100% LBA range) for a period of time (30 minutes in this case) and use HDTach to visualize the impact on write performance: 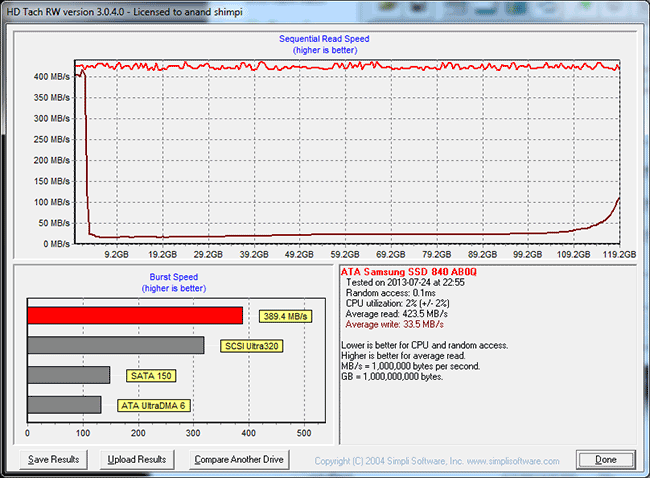 Minimum performance drops down to around 30MB/s, eugh. Although the EVO can be reasonably consistent, you'll still want to leave some free space on the drive to ensure that performance always stays high (I recommend 15 - 25% if possible). 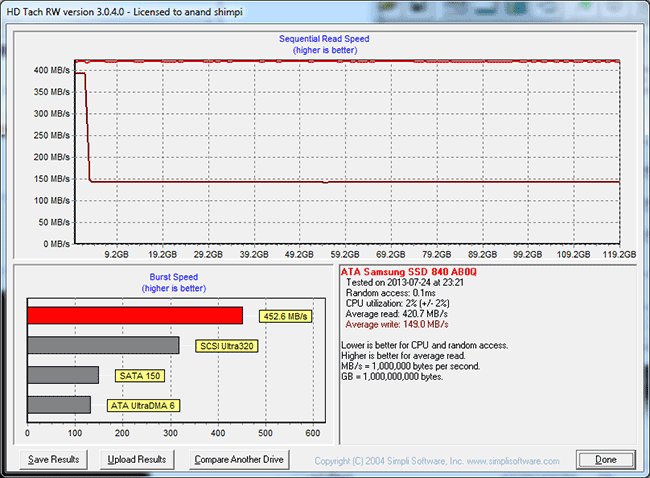 The short period of time at 400MB/s is just TurboWrite doing its thing.