Bringing 3D to the Notebook 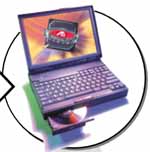 First off, the Mobility Radeon uses a crippled version of the Radeon's rendering pipeline, meaning that it has one of the Radeon's two, three texture pipelines, thus the chip is capable of processing 3 texels per clock. As we pointed out in our Radeon 64MB DDR review, this feature may be nice in future games but goes pretty much unused currently. The reason for this is that the Mobility Radeon's 3 texture pipeline will only be able to take advantage of the two textures that the vast majority of games out there now use. For example, when rendering a scene in ID's popular Quake III Arena game, the Mobility Radeon's core will only be able to process two texels per clock, as the extra texture unit on the chip's pipeline goes unused. ATI claims that support for three textured games is right around the corner, and people such as John Carmack support the idea of using the additional texture in games, but the truth is that the majority of stuff out there now will only be able to use two of the Mobility Radeon's three texels per pass. Let us point out once again that this is not necessarily a bad thing, especially considering that it is the memory bandwidth that provides the limitation, not the texel per second speed.  What is bad, however, is the loss of the extra pipeline.  This will certainly decrease chip performance.

Once again included in the Mobility Radeon's core is TMDS, a controller for driving digital video output. Naturally this is important when it comes to notebook computers, as they use this controller to power the LCD display. However the Mobility Radeon now gets dual display support courtesy of ATI's HydraVision software, meaning that an image or the desktop can be split among both a laptop's LCD and an external monitor.

We have not yet had a chance to play with HydraVision, but from the looks of it the software will provide support similar to what NVIDIA is currently offering in their TwinView enabled cards. This means that not only can a desktop be stretched across two monitors, but a game can be played from two different views (if there is enough power) and two applications can be run on different displays. This application of HydraVision seems to make the most sense in the notebook market, since it will now be easy to bring you mobile computer home, hook it up to your desktop monitor, and take advantage of HydraVision technology.