As it turns out, despite being a very unorthodox case design, the Corsair Carbide Air 540 is also ridiculously easy to build a system in. I never expect a Corsair case to be difficult, but as I've repeated over and over already, this isn't a typical Corsair case. Amusingly, outside of a larger footprint that makes the Air 540 more unwieldy to manipulate, it's actually in many ways even easier to build in than a garden variety ATX case.

For starters, installing the motherboard is a breeze. Corsair includes a mounting/alignment post for the center motherboard mount, and the standoffs for a standard ATX case all come preinstalled. The screws for the case are even sorted into separate baggies for each specific purpose. I'm not sure Corsair could've made mounting the motherboard any easier. Wiring in the motherboard headers is also simple; there are plenty of routing holes around the tray and they're all placed logically. And because the case is designed with enough headroom for radiators in the top and front, your hands never feel crunched. It's spacious but doesn't feel like an inefficient use of space.

Installing drives wasn't without its hiccups, but was still pretty simple. I was pleasantly surprised to see that the 3.5" drive trays in the bottom of the primary chamber actually have SATA backplanes behind them; you don't have to wire up the drives installed in these trays, just the planes themselves. And the trays themselves are toolless and exactly flexible enough to wrap around and secure 3.5" drives. 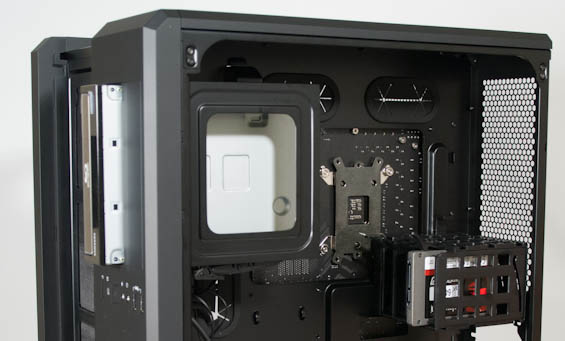 In the rear chamber, the toolless 2.5" drive cage looks a little chintzy but definitely gets the job done. Drives installed feel secure, but you're really going to want 9.5mm drives instead of slimmer ones as these cages seem to have been designed specifically for those exact dimensions. My only complaint as far as drive installation goes has to do with the 5.25" bays. Because of their orientation it's nigh impossible to screw them into place. The bay shields easily pop in and out and they're secure when in place, but you're relying on Corsair's toolless mechanism to keep the 5.25" drive secure. I found with our blu-ray drive that the drive itself would lock into place and couldn't be pushed too far into the Air 540, but was relatively easy to push back out of the case from behind. If you're using a hotswap bay that may require you to pull a drive out, there's a chance you'll have to push it back into the case and back into place. 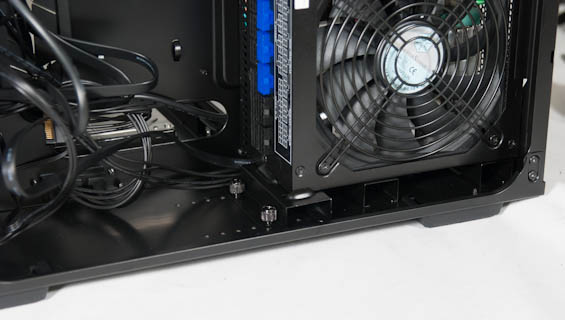 What really surprised me is that Corsair created an essentially toolless power supply installation. There's a bracket mounted to the bottom fo the 540 that will hold the back corner of the power supply in place; you install the drive between the 2.5" drive cage and the risers in the bottom of the enclosure, then place the bracket and thumbscrew it in. There's still a little bit of wiggle, but it's remarkably secure. If you don't want to go toolless, there are still holes in the rear of the chassis for you to manually screw in the power supply. 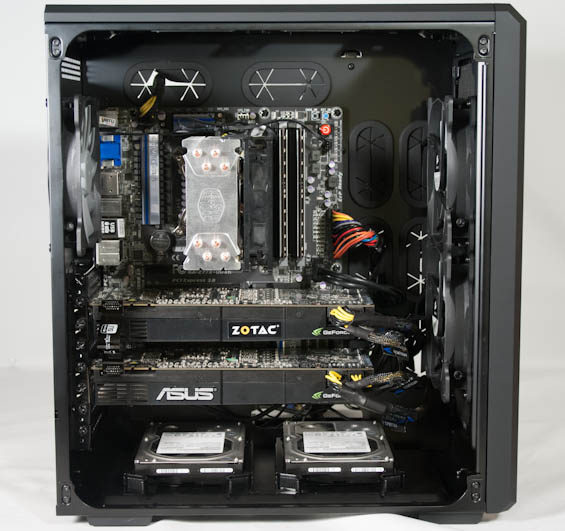 Expansion cards, on the other hand, went in pretty easily, and wiring up the whole case proved to be simple as well. There's a copious amount of space in the Air 540 between the 5.25" drive bays and the power supply that allows you to stash cabling without too much fuss. Corsair even intelligently oriented the 5.25" bays and the 2.5" cages; you won't have to twist power leads to bridge between the two. It's a small touch but an appreciated one. Note that the three 140mm fans included all use three-pin connectors and Corsair does not include molex adapters for them.

I feel like the only thing that could really keep someone from doing a speedy assembly of the Carbide Air 540 is just the slightly alien design itself. Corsair has done everything they can to make it as simple as possible, and while I'm not sold on the mounting system for the 5.25" drive bays, it at least gets the job done. I'm as happy with the case's ease of assembly as I am with its aesthetics: it's not just a good-looking case, it's an easy to use one as well.