Perhaps one of the most surprising features onboard the Google Play edition SGS4 and HTC One is the new camera UI. This UI was previously leaked as coming with the next version of Android, so it's a bit interesting to see it crop up here in 4.2.2 on these devices. I suspect there was some element of – we're going to have to do tuning and make sure the interface works twice otherwise, so why not just do it now – at play here. 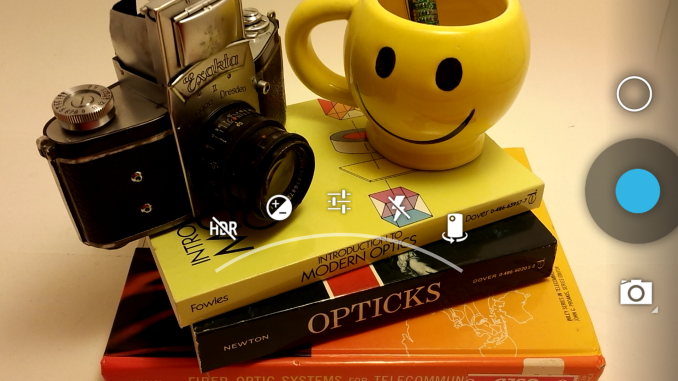 The fundamental set of features remains largely the same. What's different is there's a new settings menu which works by sliding your finger up through settings panes. Previously the settings switcher was a circular menu, this new one moves up and down through a hierarchy of drill-down settings panes. This can be activated either by long pressing anywhere in the preview or tapping the settings circle. The first level has HDR, manual exposure control, flash settings, and rear/front facing camera switcher. Tapping on Settings gets you into more options with location, countdown timer, color temperature, photo size and scenes. Another new addition is that the volume rocker (up or down) acts like a shutter button. There's also unsurprisingly no way to change the default storage location from internal to the SD card for the SGS4 GPe, as I touched on earlier.

Beyond that nothing is really all that different in this new version of the interface. I still want control over ISO, and I still am dismayed at Google's decision to fit the camera preview to the viewport in their camera application – it's like this bold surreal statement that composition doesn't matter when taking a photograph. For example, the preview is a 16:9 crop of a 4:3 aspect ratio image on the SGS4, it's just a lucky coincidence that the 16:9 preview on the HTC One is accurate since it has a 16:9 aspect ratio sensor. The result is an interface that trades appearance for functionality, and I'm totally dismayed by it.

Of course, the benefit of the platform including the stock camera application is that you get the ability to shoot PhotoSpheres and 360 Panoramas from the application on both devices. 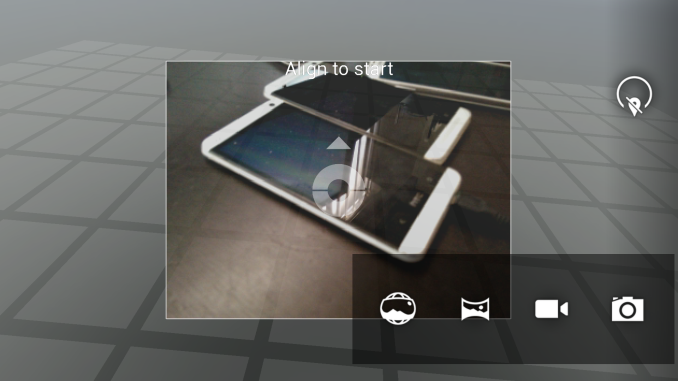 The big concern with the GPe versions some people had is what happens to image quality. I wasn't too worried about image quality since this is all stuff upstream of the camera application itself and the UI that dictates image quality, and that's still the responsibility of the respective OEMs to tune and get right. The concern is lack of control over the camera thanks to the simplified stock Android camera UI and how much control translates between the two. We've already evaluated and hopefully settled the debate between the two cameras in the respective reviews. This is just a matter of checking to see if there's anything different.

I took pictures on a stock international version HTC One and the HTC One GPe alongside it in normal test scene light, low light, and low light with night mode to check if these three corners of the camera tuning check out. Thankfully, they do line up like expected almost identically. The "Night" scene mode in the settings menu lines up with the 0.3 second, ISO 800 night mode in the stock UI, the rest of the performance produces results in line with the stock version. A big difference is that it seems as though sharpening is turned way down, maybe even off, on the GPe variant, a thoughtful change.

I performed the same sanity checks with the SGS4 GPe and discovered that thankfully this also reflects basically the same tuning as the stock version. Better still, the Night scene mode in the stock UI corresponds exactly with the Low Light Shot shooting mode on the stock SGS4 with the same performance. I purposefully pushed the dark scene for both the HTC One and SGS4 to the extreme to see if they have the same cutoff behavior.

You can also see what I'm talking about with the stock Android camera UI clipping off the top and bottom of the image. By default it shoots 13 MP 4:3 stills, which is awesome, just be warned that there's more field of view both above and below the cutoffs in the frame which need to be framed to. I've said my part already about how blowing up the preview to fill the frame and cutting those regions off is so, so wrong. Again, composition when taking a photo is important, giving me a preview that isn't a lie is also important.

I'm glad that both devices have no degradation in image quality from what I can tell. This is again not a surprise given the abstraction of those stages in the image processing pipeline away from the core Android software platform.