Like the GTX 770 last month, the GTX 760 is clocked relatively high. Its 980MHz base clock is 65MHz higher than either the GTX 670 or GTX 660 Ti. As a result some of the overclocking headroom that we would expect has been eaten into by the overclock. Yet on the other hand the higher voltage for the highest boost bin – 1.2v versus 1.175v – gives us some additional overclocking headroom as long as our cooling can keep up.

At the same time the GTX 760 gets a slightly larger TDP adjustment window than most other GK104 parts. Here we can push the TDP up by up to 15%, from 170W to 195W. This is actually more than the GTX 770, so in TDP limited scenarios we should have a slightly easier time hitting the higher boost bins.

In practice GTX 760 ended up exceeding our expectations. In fact it even ended up exceeding GTX 770 with regard to the size of the overclock and the highest boost bin we reached. Altogether we were able to increase the core clock by 150MHz on our GTX 760 sample, going from a base clock of 980MHz to 1130MHz. At the same time our max boost clock went from 1149MHz to 1306MHz, making this the first Kepler we’ve seen to surpass 1300MHz. The end result is that core overclocking ends up being more potent than we were expecting.

Meanwhile the memory overclock is fairly standard for a GK104 part. It’s something of a roll of the dice, and in this case we were able to hit 6.5GHz before memory performance started regressing. Thus we’re altogether looking at a 15% core overclock coupled with a milder 8% memory overclock. 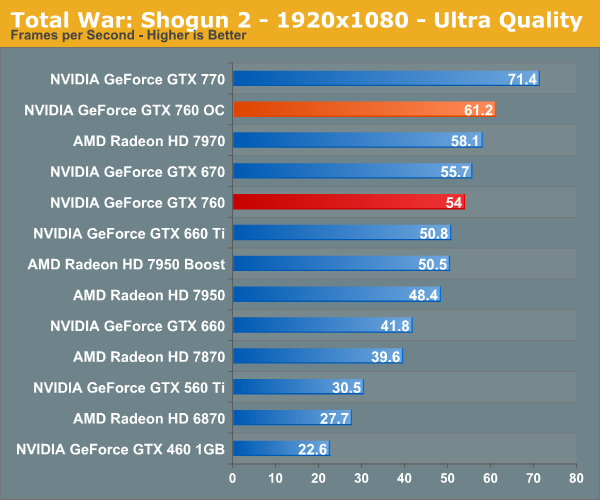 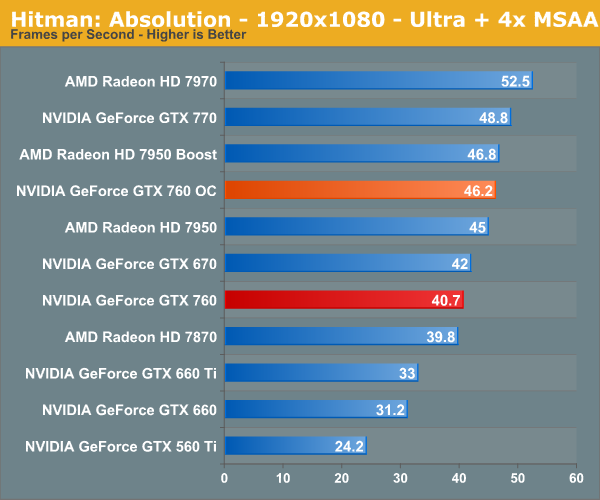 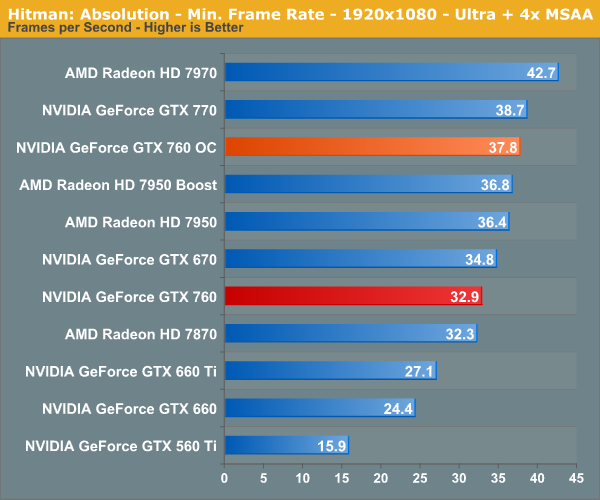 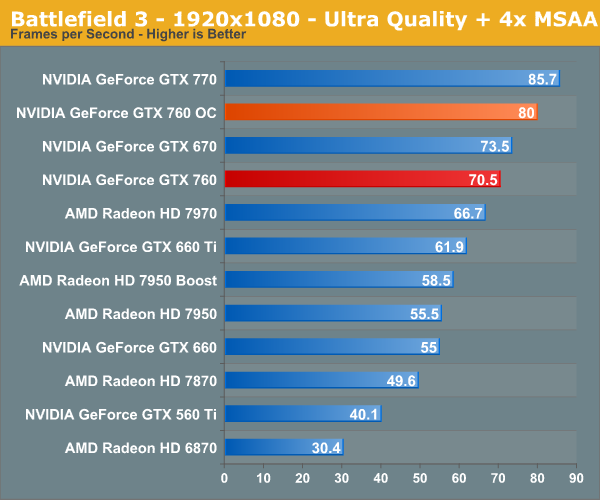 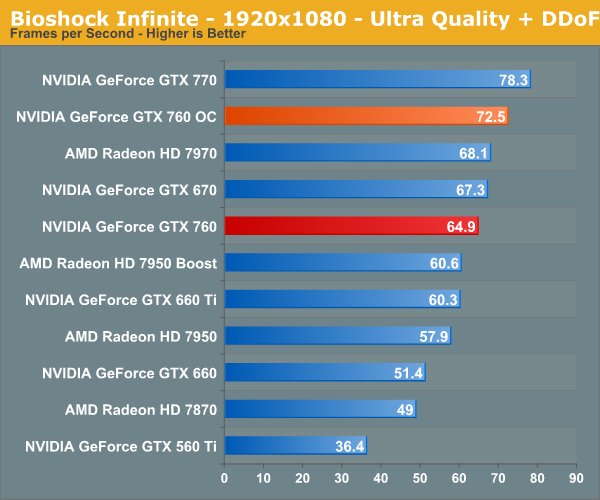 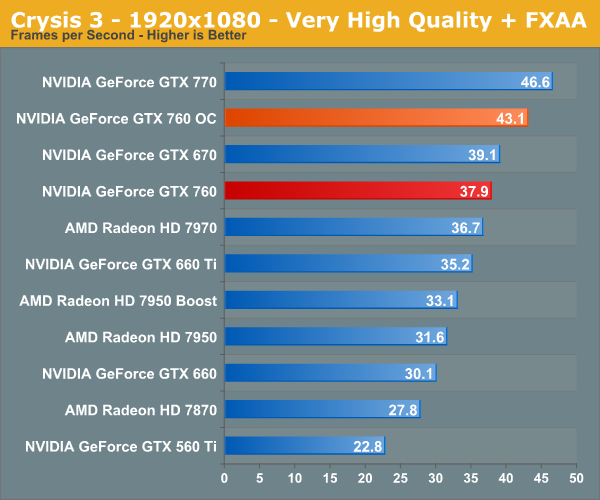 Given GTX 760’s base shader/texture performance deficit due to only having 6 SMXes, overclocking proves to be very effective on our final results. The performance gains in all 5 of our games were on the order of 12% to 14%, just a bit less than the core overclock itself. With the wide gap between the GTX 770 and GTX 760 in terms of specs this generally isn’t enough to completely catch up to NVIDIA’s top-tier GK104 card, but it can erase a large portion of the gap.

The end result of this overclock won’t dramatically change the GTX 760’s performance profile, but it should help to push it over 60fps in those situations where performance at 1080p at ultra quality settings was marginal. Or from a fixed performance standpoint, we’re approaching Radeon HD 7970 performance with this overclock. 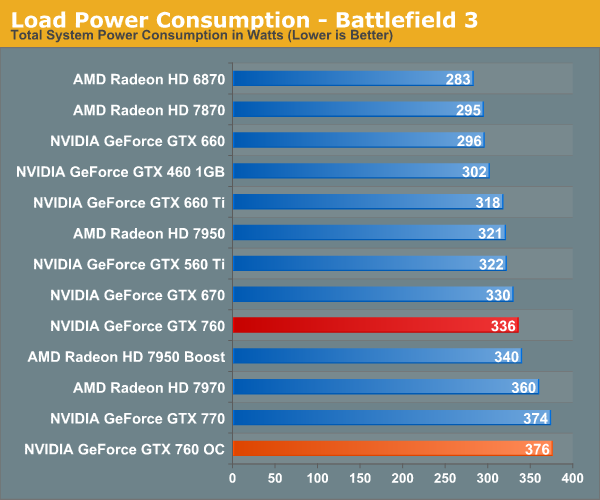 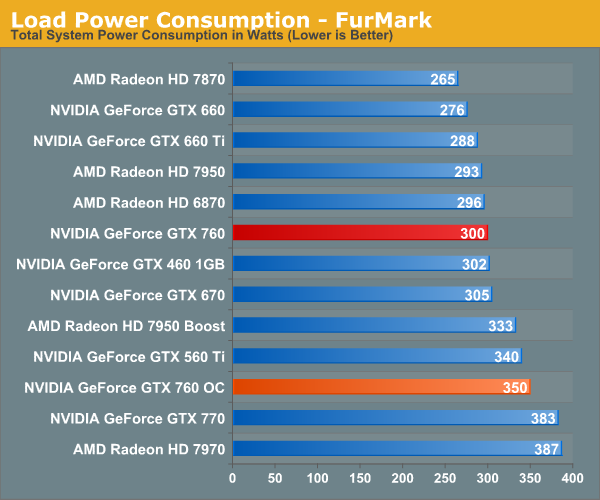 Moving on to power consumption, increasing our TDP has the expected hit. GTX 760 of course has a larger adjustment window than GTX 770, so the increase in power consumption ends up being noticeably larger. Overclocking in this manner pushes the GTX 760 off of the power/performance efficiency curve to some degree, so the GTX 760 loses its edge in that respect.

The end result is that power consumption at the wall jumps by 40W under BF3, and 50W under FurMark. This is tied with and better than the stock GTX 770 respectively, though as we’ve already seen it doesn’t match the GTX 770’s rendering performance. Furthermore as we’ll see, cooling is going to play a big factor here, with the reference GTX 760 cooler not always being the best choice for overclocking. 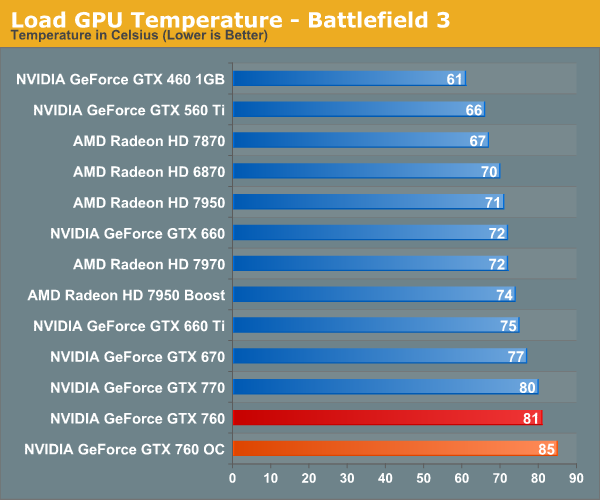 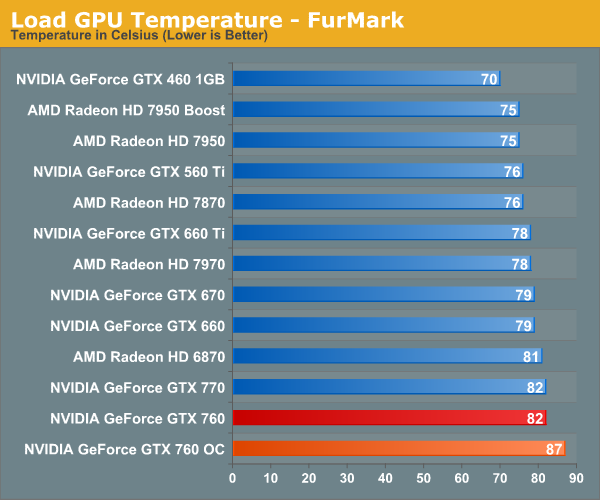 With the temperature limit raised to 95C, the reference GTX 760 cooler reaches equilibrium at 85C under BF3 and 87C under FurMark. These temperatures are still easily within spec for GK104, but they’re definitely starting to crawl up here. Meanwhile, though it’s not directly measurable the impact of leakage is certainly making itself felt here. If we had cooler temperatures power consumption would at least be marginally lower. 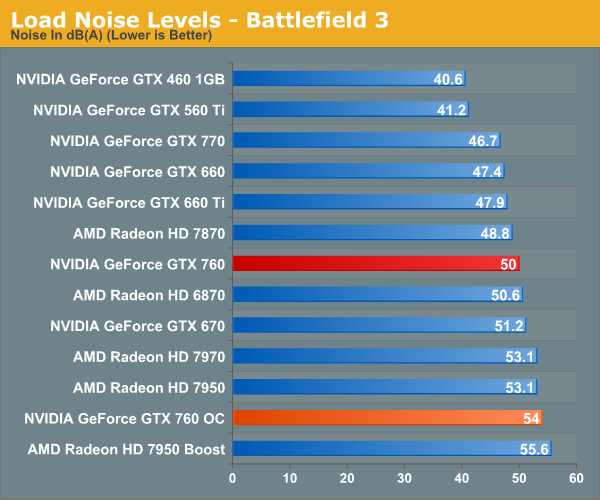 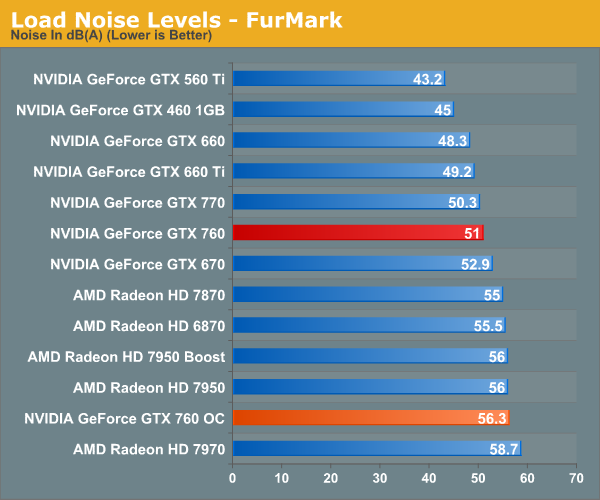 Finally we noise we can see that those new equilibriums also come at new, much higher noise levels. The reference cooler can keep up with the higher heat load created by overclocking, but it’s having to work hard to do so. These noise levels aren’t terrible – in fact they’re about even with the reference 7950 – but they do represent a real cost in terms of noise. Consequently, unlike NVIDIA’s Titan cooler that comes with the reference Titan, GTX 780, and GTX 770, when it comes to GTX 760 there’s very clearly room for improvement with custom coolers.