With both the 600 series GK104 parts and the GK104 based GTX 770 as a backdrop here, we’re not expecting any great surprises here. Power consumption is going to approach the GTX 670 thanks to GPU Boost 2.0 and the identical TDPs. And since the cooler is also the same, acoustics should also be similar. Only idle power should show any real variation.

Looking at the average clockspeeds among our games, despite the official 1033MHz boost clock for GTX 760 always boosts to an average over 1100MHz, with most games boosting to around 1130MHz. The limiting factor here is typically temperatures, which quickly hit 80C at the highest boost bin and its 1.2v operating voltage. A card with a better cooler would likely have no trouble sustaining 1149MHz here. 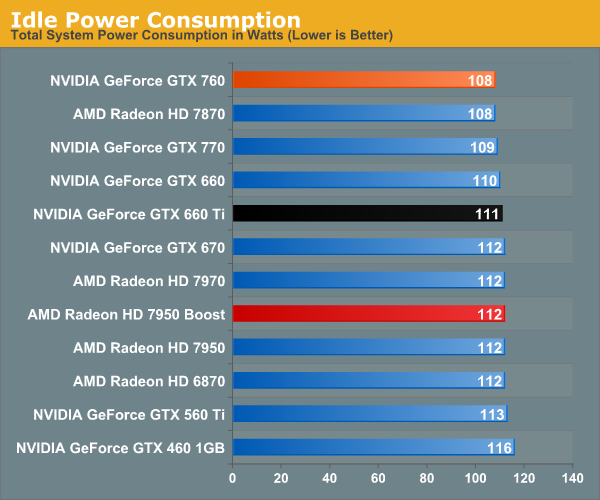 As we saw with the GTX 770 a few weeks ago, NVIDIA’s idle power consumption as measured at the wall has come down a couple of watts compared to the older GK104 cards. With a lower idle clockspeed compared to the GTX 660 Ti and its ilk, NVIDIA has been able to shave off that wattage without any more substaintial changes. However I continue to be surprised that we’re seeing any difference between the GTX 760 and the 7950B, as AMD is no slouch here either. 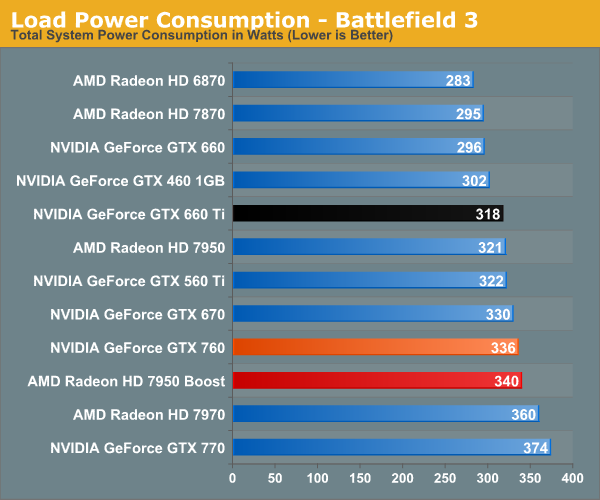 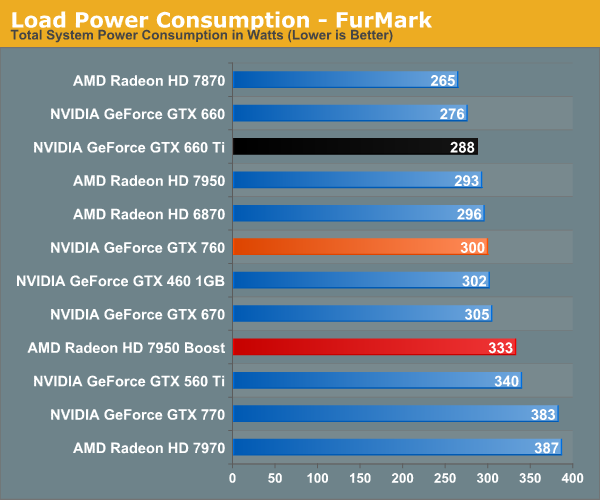 With Furmark the story is fairly similar for the NVIDIA cards, all of which come close together due to their similar TDPs. Meanwhile the 7950B pulls about 30W more at the wall, in-line with its 200W TDP. NVIDIA edged out AMD on power efficiency with the 600 series, and we’re going to see the same thing on the 700 series. 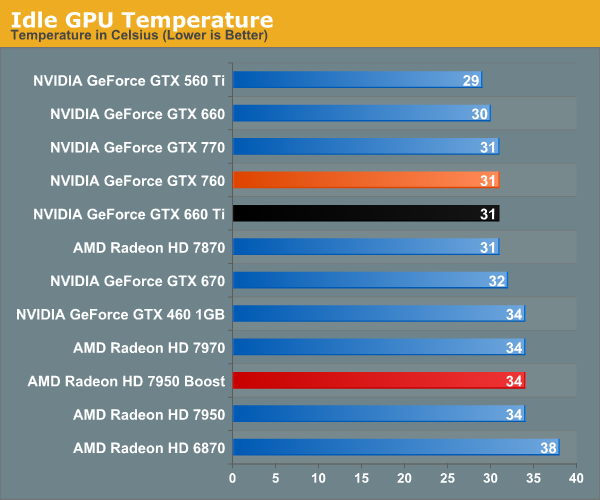 Based on the same cooler and GPU as the GTX 670, the GTX 760 offers no grand revelations here. 31C is standard for this type of blower cooler. 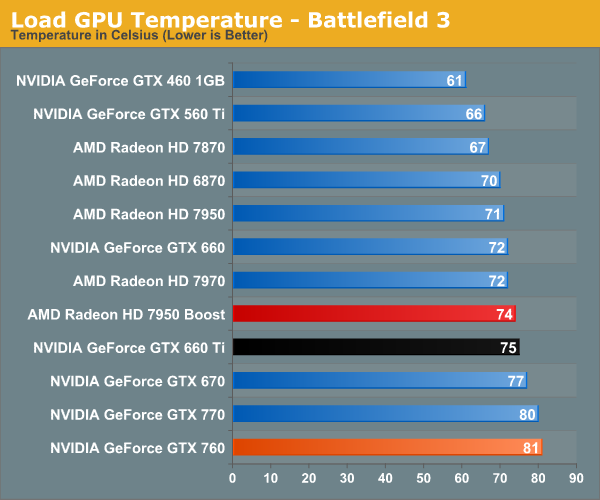 Even though the GTX 760 and GTX 670 have identical TDPs, the presence of GPU Boost 2.0 means that the GTX 760 operates nearer its TDP more often, and in this case the 80C throttle imposed by GPU Boost makes itself felt. 81C does end up being the worst among the cards in this collection, but it’s a reasonable temperature for a GK104 GPU, to the point where in temperature limited scenarios this is exactly where it’s designed to top out at. 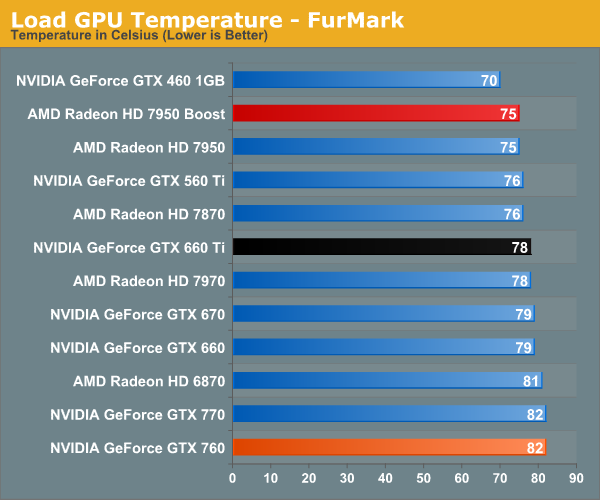 With FurMark our results are much the same as with BF3. The slower response time of the fans on the GTX 770 and GTX 760 mean that both cards top out at 82C before temperatures level out, a few degrees warmer than with the GTX 670 and GTX 660 Ti. Alternatively the 7950B and its more powerful fan keep temperatures at or below 75C for any workload we throw at it. 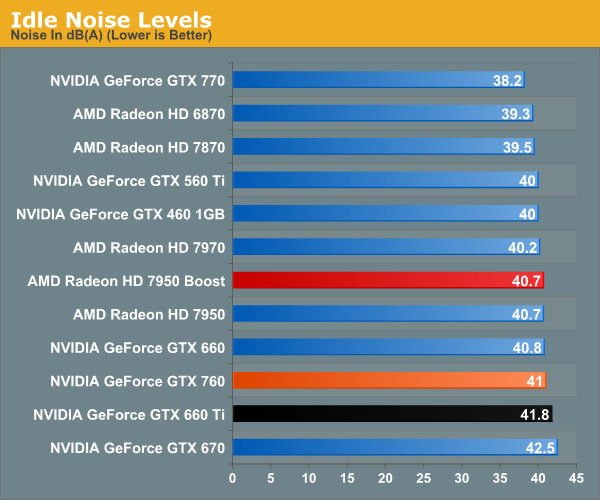 Since NVIDIA used the same cooler/fan assembly as on the GTX 670, the GTX 760 is going to give us similar acoustics. Unfortunately that includes the characteristic faint grinding noise that we’re previously mentioned. Idle noises as a result are respectable, but GTX 770 this is not. 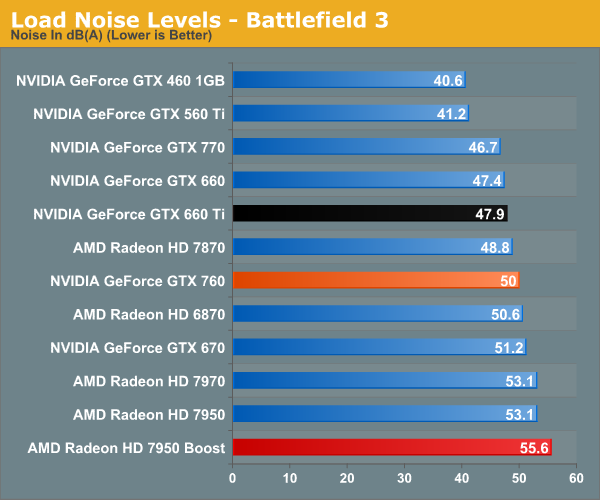 Moving to fan noise under load, here we can see NVIDIA’s default fan curve and 80C throttle once again pay off. The GTX 760 hits 50dB under BF3, which for this specific cooler is actually doing a bit better than average, as evidenced by the slight advantage the GTX 760 has over the GTX 670. The GTX 770 and Fermi cards are something of spoilers here though, a reminder of what the Titan cooler and open air cooling can do. We will have some custom GTX 760s next week, so it will be interesting to see how much better these cards are when it comes to noise. 50dB is by no means bad, especially for the performance, but at this point we’ve seen lower noise levels out of cards with similar price tags and TDPs. 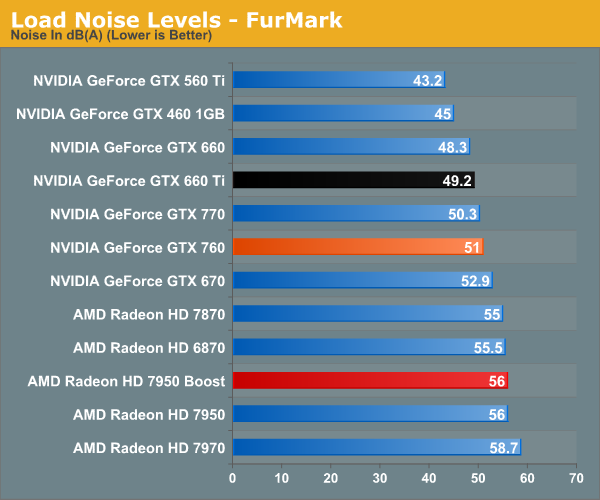 Finally, FurMark once again paints a picture very similar to what we saw with Battlefield 3. For NVIDIA cards this is middle of the road, while at 5dB quieter than the reference 7950B it’s a significant improvement.