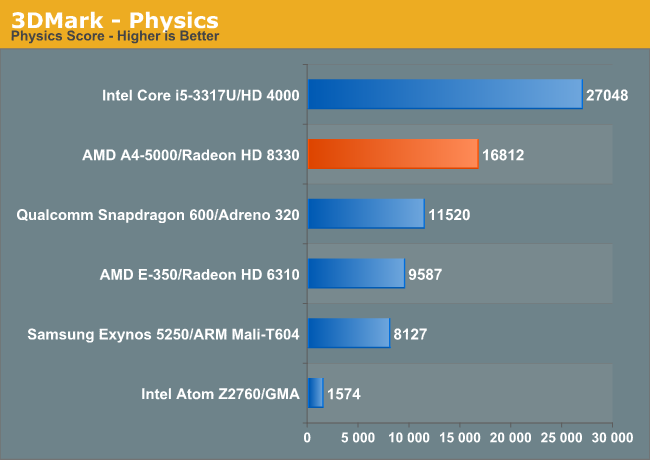 The physics test is a bit unreasonably multithreaded, which is why we see a 75% uplift compared to AMD's E-350. For FP heavy game physics workloads however, Jaguar does quite well. While a big Ivy Bridge is still going to be quicker, AMD's A4-5000 gets surprisingly close given its much lower cost.

The 3DMark graphics test is more of what we're interested in seeing here. Two GCN compute units (128 SPs/cores) running at 500MHz will really put the old Radeon HD 6310 in Brazos to shame: 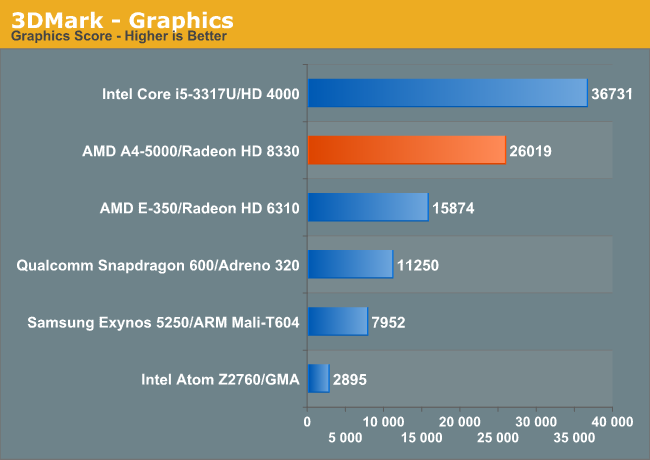 The results are quite good. Kabini manages a 61% performance advantage over AMD's old Brazos platform, and actually gets surprisingly close to Intel's HD 4000 in performance. As we discovered earlier, this isn't really enough performance to play modern PC games but casual (and especially tablet) gaming workloads should do wonderfully here. 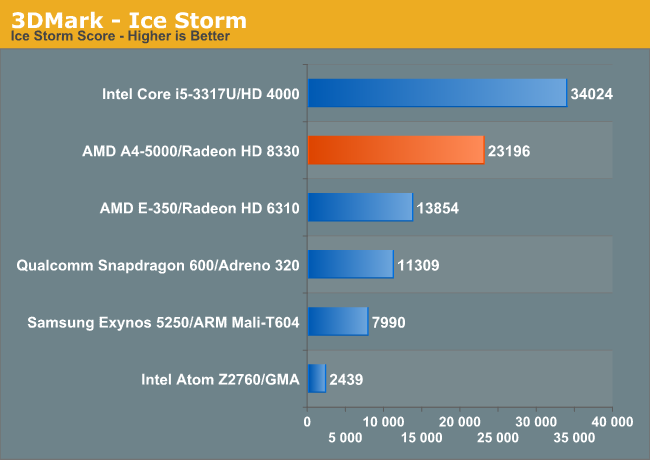 The overall Ice Storm score just incorporates both physics and graphics test components. As expected, Kabini continues to lead over everything other than the i5-3317U.

Finally we have the GFXBenchmark T-Rex HD test. I threw in a handful of older PC GPUs, although keep in mind that T-Rex HD isn't very memory bandwidth intensive (penalizing some of the old big PC GPUs that had good amounts of memory bandwidth). The test is also better optimized for unified shader architectures, which helps explain the 8500 GT's excellent performance here. 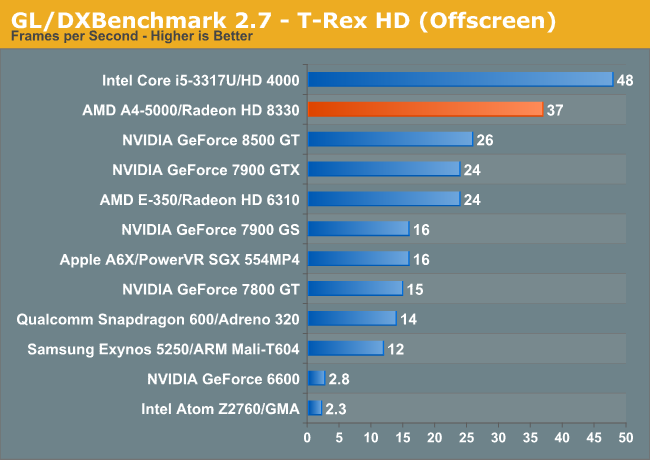 Kabini does very well in this test as well. If we look at the tablet-oriented Temash part (A4-1200) we see that the number of GCN compute units remains unchanged, but max GPU frequency drops to 225MHz from 500MHz. If we assume perfect scaling with GPU clock speed, Temash could offer roughly the same graphics performance as the 4th generation iPad. AMD claims the A4-1200 Temash APU carries a TDP of only 3.9W, a potentially very interesting part from a GPU perspective if our napkin math holds true.

For our last comparison we're looking at the OpenCL performance of these on-die GPUs. We're using a subset of Ryan's GPU Compute workload, partially because many of those tests don't work properly on Kabini yet and also because some of those tests are really built for much more powerful GPUs. We've got LuxMark 2.0 and two CLBenchmark 1.1.3 tests here. Their descriptions follow:

SmallLuxGPU is an OpenCL accelerated ray tracer that is part of the larger LuxRender suite. Ray tracing has become a stronghold for GPUs in recent years as ray tracing maps well to GPU pipelines, allowing artists to render scenes much more quickly than with CPUs alone.

CLBenchmark contains a number of subtests; we’re focusing on the most practical of them, the computer vision test and the fluid simulation test. The former being a useful proxy for computer imaging tasks where systems are required to parse images and identify features (e.g. humans), while fluid simulations are common in professional graphics work and games alike.

LuxMark is really a corner case here where Kabini shows a performance regression compared to Brazos. The explanation is simple: some workloads are better suited to AMD's older VLIW GPU architectures. GCN is a scalar architecture that is usually going to net more efficient usage, but every now and then you'll see a slight regression. Intel's HD 4000 actually does amazingly well in the LuxMark 2.0 benchmark.

Our two CLBenchmark tests however paint a very different picture. Here Kabini not only significantly outperforms its predecessor, but is faster than Ivy Bridge as well.