NVIDIA is primarily pitching the GeForce GTX 780 as the next step in their high-end x80 line of video cards, a role it fits into well. At the same time however I can’t help but to keep going back to GTX Titan comparisons due to the fact that the GTX 780 is by every metric a cut-down GTX Titan card. Whether this is a good thing or not is open to debate, but with NVIDIA’s emergence into the prosumer market with GTX Titan and the fact that there’s now a single-GPU video card above the traditionally top-tier x80 card, this complicates things as compared to past x80 card launches.

Anyhow, we’ll start with the obvious: the GeForce GTX 780 is a filler card whose most prominent role will be filling the game between sub-$500 cards and this odd prosumer/luxury/ultra-enthusiast market that has taken root above $500. If there’s to be a $1000 single-GPU card in NVIDIA’s product stack then it’s simply good business to have something between that and the sub-$500 market, and that something is the GTX 780.

For the small number of customers that can afford a card in this price segment, the GTX 780 is an extremely strong contender. In fact it’s really the only contender – at least as far as single-GPU cards go – as AMD won’t directly be competing with GK110. The end result is that with the GTX 780 delivering an average of 90% of Titan’s gaming performance for 65% of the price, this is by all rights the Titan Mini, the cheaper video card Titan customers have been asking for. From that perspective the GTX 780 is nothing short of an amazing deal for the level of performance offered, especially since it maintains the high build quality and impressive acoustics that helped to define Titan. 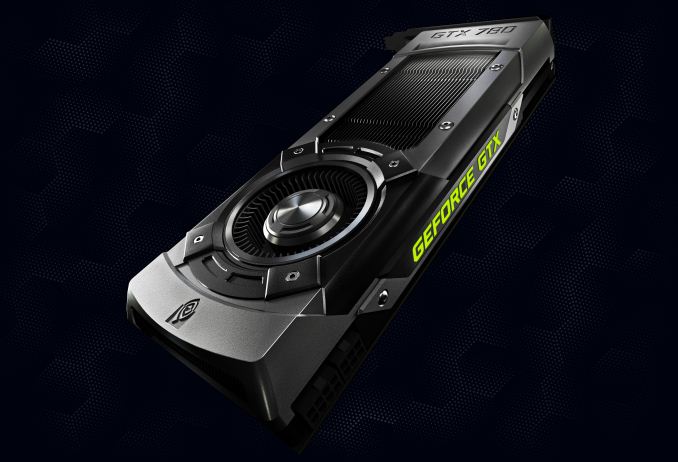 On the other hand, as an x80 card the GTX 780 is pretty much a tossup. The full generational performance improvement is absolutely there, as the GTX 780 beats the last-generation GTX 580 by an average of 80%. NVIDIA knows their market well, and for most buyers in a 2-3 year upgrade cycle this is the level of performance necessary to spur on an upgrade.

The catch comes down to pricing. $650 for the GTX 780 makes all the sense in the world from NVIDIA’s perspective – GTX Titan sales have exceeded NVIDIA’s expectations – so between that and Tesla K20 sales the GK110 GPU is in high demand right now. At the same time the performance of the GTX 780 is high enough that AMD can’t directly compete with the card, leaving NVIDIA without competition and free to set prices as they would like, and this is exactly what they have done.

This doesn’t make GTX 780 a bad card, and on the contrary it’s probably a better card than any x80 card before it, particularly when it comes to build quality. But it’s $650 for a product tier that for the last 5 years was a $500 product tier. To that end no one likes a price increase, ourselves included. Ultimately some fraction of the traditional x80 market will make the jump to $650, and for the rest there will be the remainder of the GeForce 700 family or holding out for the eventual GeForce 800 family.

Moving on, it’s interesting to note that with the launch of Titan and now the GTX 780, the high-end single-GPU market looks almost exactly like it did back in 2011. The prices have changed, but otherwise we’ve returned to unchallenged NVIDIA domination of the high end, with AMD fighting the good fight at lower price points. The 22% performance advantage that the GTX 780 enjoys over the Radeon HD 7970GHz Edition cements NVIDIA’s performance lead, while the price difference between the cards means that the 7970GE is still a very strong contender in its current $400 market and a clear budget-saving spoiler like the 6970 before it.

Finally, to bring things to a close we turn our gaze towards the future of the rest of the GeForce 700 family.  The GTX 780 is the first of the GeForce 700 family but it clearly won’t be the last. A cut-down GK110 card as GTX 780 was the logical progression for NVIDIA, but what to use to replace GTX 670 is a far murkier question as NVIDIA has a number of good choices at their disposal. Mull that over for a bit, and hopefully we’ll be picking up the subject soon.