Gigabyte Z77-HD4 In The Box

Motherboards on the low end of the price scale have only one focus – the motherboard itself.  While the $180-$400 packages might have those extras and bonus, we would not expect a $120 motherboard to produce much.  That being said, in the past we have been pleasantly surprised in $140-$160 packages, either ATX or mITX, which have included a USB 3.0 panel in the past.  That was when USB 3.0 was ‘an extra’, rather than a standard of the chipset – meaning that we are unlikely to get one of those as most cases now have a connector.  But in the Gigabyte Z77-HD4, we do get: 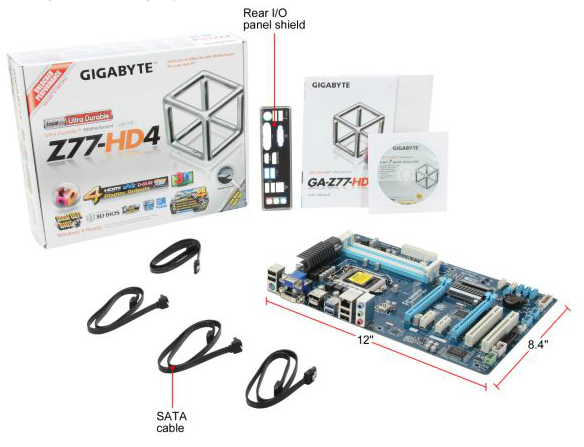 I am surprised we have four SATA cables in the box – previous motherboards from Gigabyte have had two, so users wishing to have the additional storage have some extra headroom (as long as you are not blocking the SATA ports with a second GPU).

To be honest, when dealing with a motherboard at a low price point, I was not sure what to expect regarding the overclocking.  A lot of the marketing fluff around the big launches and the high-end products is all about power delivery and overclocking prowess.  If the hullaballoo surrounding overclocking capabilities of the more expensive motherboards was blown away by smaller models, it just represents another angle that should prioritize feature set over overclocking.  Alternatively if a cheaper model falters, then the marketing surrounding overclocking could be considered justified – the other factor could also be longevity.  With a more substantial phase design, components are stressed less.  The cheaper motherboards often have cheaper phases, leading to potential heat generation issues – on the flip side more phases means more things to go wrong.

Overall however, the overclocking experience on the Z77-HD4 was better than expected, matching some of the other motherboards we have tested, despite our poor CPU!  In previous motherboards we have achieved 4.6 GHz with reasonable temperatures (albeit rather high voltages), and the Z77-HD4 matched this with ease.  In terms of manual overclocking options, we have Gigabyte’s three CPU Level Up options in the OS software, which performed with mixed results, with the top options placing too much voltage into the CPU.

For automatic overclocking, the three options available to users are located in the EasyTune6 software in the OS.  These options are labeled in a traffic light system, and 1, 2, 3 with 3 being the highest overclock.  There is also an option for ‘Auto Tuning’, which should perform a stress test style analysis to find the best overclock.  Here are our results:

The Auto Tuning option in ET6 failed to load.

Starting with our base settings (40x100 and 1.100 volts), we test for stability and increase voltage until stable.  When stable, the multiplier is increased and the process repeated.  Here are our results:

Unfortunately due to the timing of this review (very close to Haswell), we have not had time to write an extensive run-down of the BIOS and software on the Z77-HD4.  After playing with the software and BIOS, it performs identically to that of the UD3H and UD5H which we have reviewed, meaning a couple of thousand rehashed words with a slightly different twist related to the HD4.  If you wish to read up on the BIOS and software of a similar motherboard, please follow this link for the UD3H rundown.