I needed an updated heavy test, one that dealt with an even larger set of data and one that somehow incorporated IO consistency into its metrics. The new benchmark doesn't have a name, I've just been calling it The Destroyer (although AnandTech Storage Bench 2013 is likely a better fit for PR reasons).

Given the sheer amount of time it takes to run through the Destroyer, and the fact that the test was only completed recently, I don't have many results to share. I'll be populating this database over the coming weeks/months. I'm still hunting for any issues/weirdness with the test so I'm not ready to remove the "Preview" label from it just yet. But the results thus far are very telling. 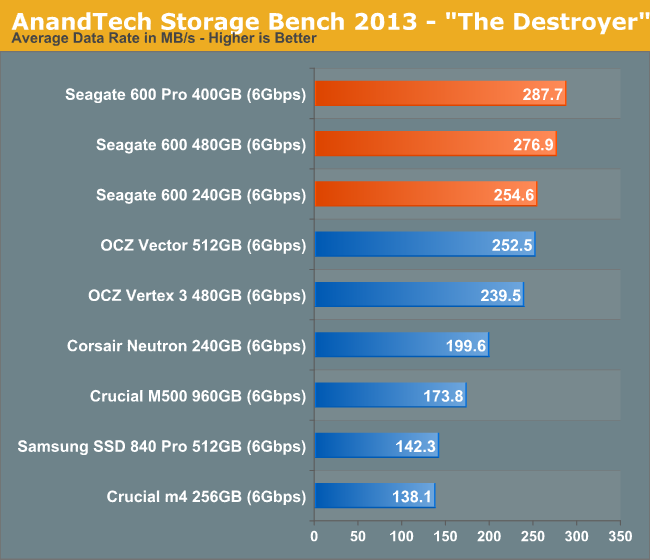 Now we see what Seagate's balance of consistency and peak performance gives us: leading performance in our latest benchmark. The Destroyer does a good job of penalizing drives with poor IO consistency as the entire drive is written to more than once, but the workload is more client-like than a pure 4KB random write. The result is a test that likes both peak performance and consistent behavior. Seagate's 600 delivers both. I purposefully didn't include a 120GB Seagate 600 here. This test was really optimized for 400GB+ capacities, at lower capacities (especially on drives that don't behave well in a full state) the performance dropoff can be significant. I'm not too eager to include 240/256GB drives here either but I kept some of the original numbers I launched the test with.

OCZ's Vector actually does incredibly well here, giving us more insight into the balance of peak performance/IO consistency needed to do well in our latest test. 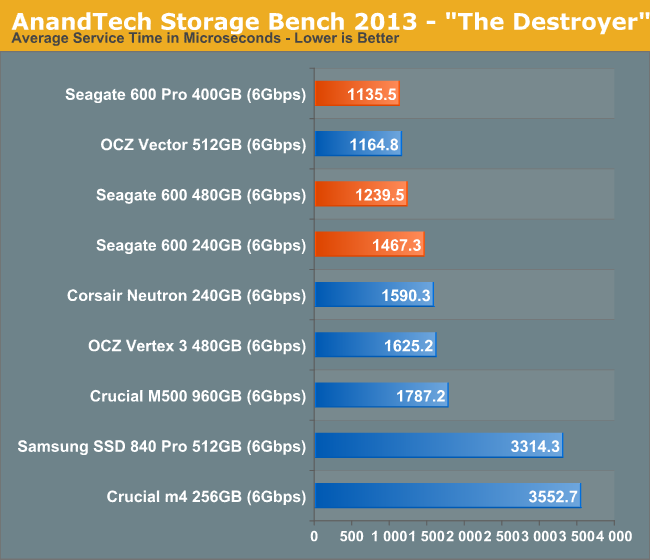 The 600's average service time throughout this test is very good. OCZ's Vector does even better here, outperforming the 480GB 600 and falling short of the 400GB 600 Pro. The difference between the 600 and 600 Pro here gives you a good idea of how much performance can scale if you leave some spare area on the drive.