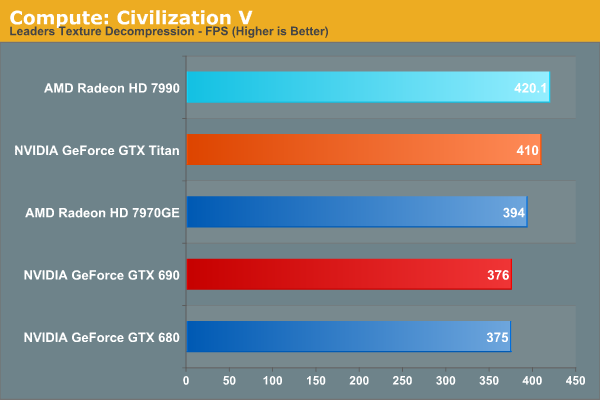 Civ V's texture compression routines are technically mutli-GPU capable, but multi-GPU scaling has never been particularly impressive here. So this test mostly reinforces what we already know about the Tahiti GPU being very capable in most DirectCompute workloads. 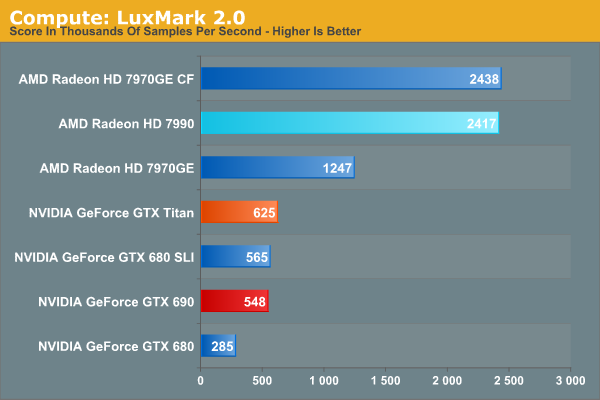 The 7990 isn’t billed as a compute product, but that doesn’t mean it’s at all weak at compute. On the contrary, as LuxMark doesn’t hit the ROPs hard the 7990 has no trouble staying under its 375W target, allowing it to sustain 1000MHz indefinitely. As a result the 7990 takes AMD’s compute advantage and runs with it. The 7990 is a bit more 2x the cost of a 680, but it’s 8.5x faster. Even against GTX Titan the difference is just short of 4x; NVIDIA simply doesn’t do well in our OpenCL tests. 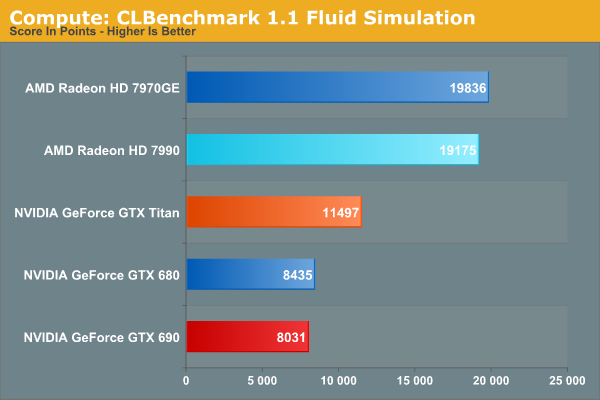 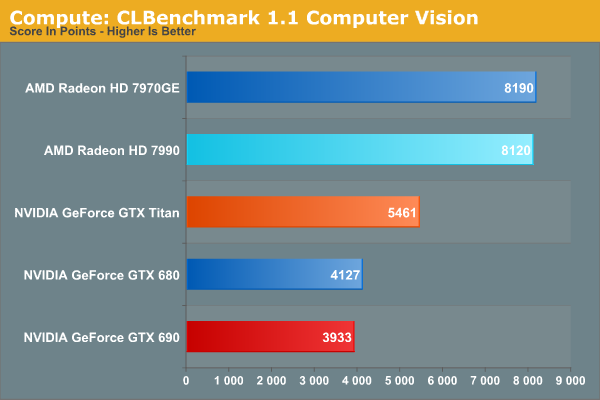 These two CLBenchmark sub-tests aren’t multi-GPU capable, so the performance of the 7990 is essentially dictated by its first GPU. All that means however is that the 7990 is once again at the top of the charts, well ahead of NVIIDA’s other cards and beating Titan by 50%-100%. At the same time this is a good reminder that not every compute task scales well across multiple GPUs, which is why single-GPU products still have a strong place in the GPU compute world. 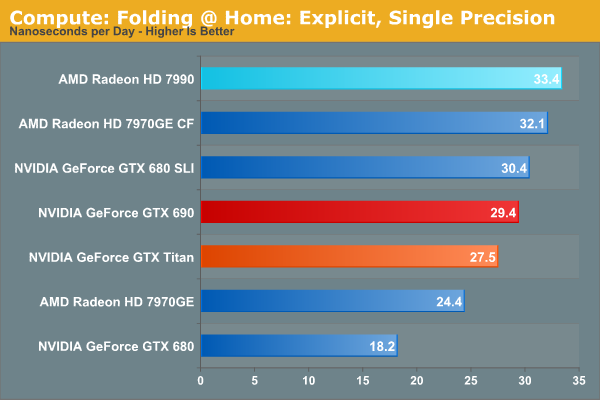 Only FAHBench’s explicit mode is multi-GPU capable, and even then the scaling to multiple GPUs isn’t great.  Still, it’s enough to help the 7990 take the top spot on this benchmark, even with NVIDIA’s latest drivers slightly closing the gap. What’s particularly interesting here though is that the 7990 is faster than the 7970GE CF, and that’s not a fluke in our results. The 7990 should by all means be at least a bit slower, and more if throttling kicks in. It looks like we’re seeing one of those rare cases where the GPUs are benefitting from the presence of the PLX bridge, as going through the relatively close-by bridge is faster than in a two-card setup where the GPUs would have to communicate through the CPU/Northbridge. However this is the only time we see such an advantage; in most other compute scenarios – let alone gaming – the PLX bridge won’t have any kind of notable impact. 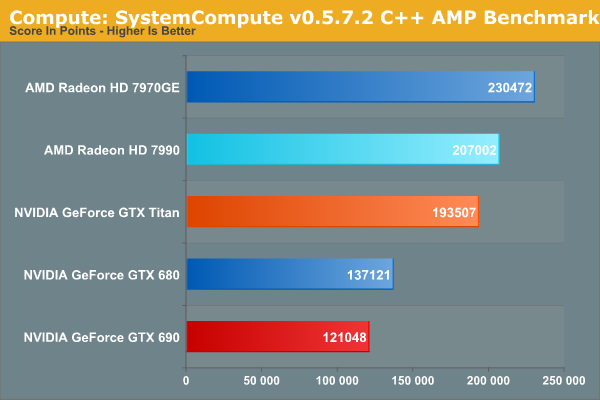 SystemCompute isn’t multi-GPU capable, so once again we’re leaning on the 7990’s first GPU. To that end we find the 7990 in second place, but we also see the 7790 clearly trailing the 7970GE by more than we’ve seen in our other compute benchmarks. SystemCompute does do a lot of I/O, so if FAHBench is the ideal case for showcasing the benefits of the PLX bridge in GPU to GPU I/O, then SystemCompute is good case for showcasing the drawbacks of the PLX bridge, mainly the higher I/O latency. It’s not enough to cripple the 7990 – it’s faster than the GTX Titan even here – but it does cost the 7990 some performance.