Samsung’s strategy in the mobile market appears to be success through catering to a sea of niches. I’ve also heard it referred to as having a device at every inch. In this sense, Samsung is the antitheses of Apple where simplicity in product lines is paramount. I’d argue that the right approach is likely a mix of the two. Samsung may have too many products, while Apple may offer too few.

The good news is, if you’re very specific in your needs there’s likely a product made almost perfectly for you.

When the Galaxy Note 10.1 launched, I felt the tablet had potential but was largely held back by unpolished/unfinished software. Since its launch, Samsung addressed many of initial complaints about things like multi-window app compatibility and window focus lag. The result is a far more usable platform that still doesn’t feel native, but doesn’t feel hacked together either. The Galaxy Note 8.0 benefits from showing up after the software updates, meaning it looks a lot more polished out of the gate. 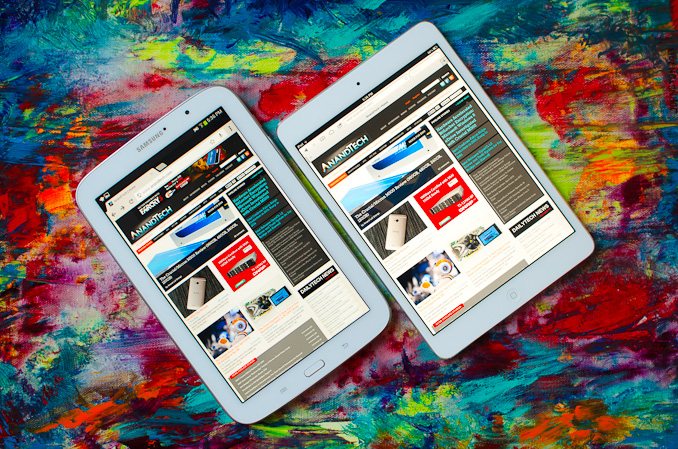 Indeed it’s tough to find fault with the Galaxy Note 8.0. It’s a good size, has a good display and offers a little more than your standard Android tablet. The inclusion of the S Pen, IR blaster and multi-window features aren’t enough to justify the price premium over a Nexus 7 for me personally, but I can see how they would convince others. If you want a one-handed note taking assistant on the go and/or constantly find yourself wishing you could read email and browse the web on your tablet, then the Galaxy Note 8.0 is without equal in the Android or iOS space. The S Pen experience on the Note isn’t perfect, it’s definitely not as natural as writing on real paper with an actual pen, but at this price point it’s surprisingly decent. You can definitely get a better pen experience on Microsoft’s Surface Pro, particularly when it comes to drawing, but at more than 2x the cost.

Where the Note 8.0 falls short is primarily in its battery life. In general you’re looking at anywhere from 10 - 40% less time on a single charge compared to the iPad mini, despite having a slightly larger battery. Power efficiency is just as important as outright performance, and this is something the folks at Samsung’s SoC division have yet to master. It’s not immediately obvious how much of a role the panel plays in all of this, but looking at our GLBenchmark battery life results it’s clear that the SoC has a significant impact.

Is the Galaxy Note 8.0 worth buying? If you're upgrading from an older Galaxy Tab 8.9, the Note 8.0 is worlds better in pretty much every way. It's faster, lasts longer on a single charge, can do more and ships with a newer version of Android. Ultimately what will sell you on this tablet vs. the Nexus 7 (or iPad mini if you’re cross shopping) is the S Pen and Samsung’s Android customizations. If you’re sold on the former, then the Note 8.0 is a good fit for you. If you're not however, then depending on your needs the Nexus 7 (or waiting for this year's model), iPad mini and Nexus 10 are all great alternatives. 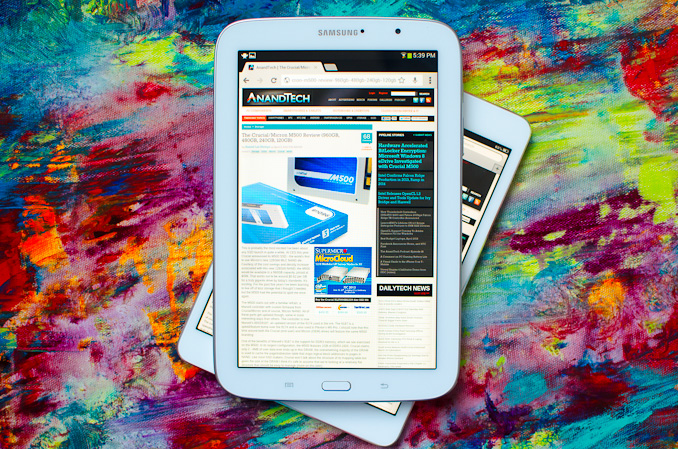 What could turn the Note 8.0 from a solid niche contender to a formidable competitor is rather simple. With a higher resolution display (and accompanying tweaks to make TouchWiz a little more subtle in its screen presence) and a faster SoC, the Note 8.0 could really play up the productivity angle. Without a doubt the next generation of this platform will incorporate some sort of Cortex A15 based SoC, which should make it even better for multitasking. Couple that with an awesome panel and tightened up UI and Samsung could have a broad winner on its hands.