A Preview of The Destroyer, Our 2013 Storage Bench 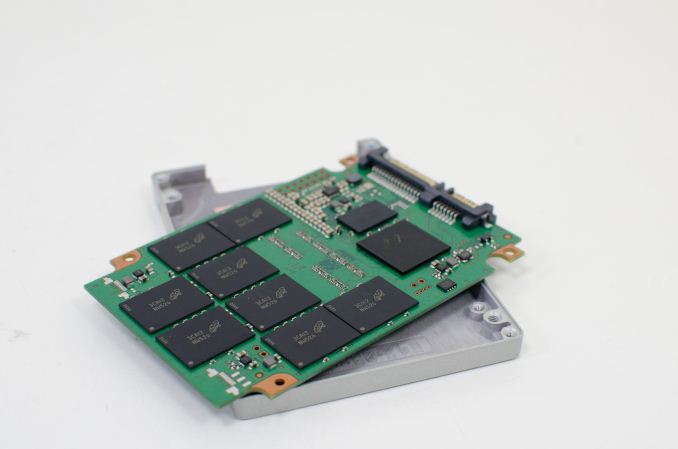 I needed an updated heavy test, one that dealt with an even larger set of data and one that somehow incorporated IO consistency into its metrics. I think I've come up with the test, but given the short timeframe for this review (I only got my M500 drives a few days ago) I couldn't get a ton of data ready for you all today. The new benchmark doesn't even have a name, I've just been calling it The Destroyer (although AnandTech Storage Bench 2013 is likely a better fit for PR reasons).

Given the sheer amount of time it takes to run through the Destroyer, and the fact that the test was only completed a little over a week ago, I don't have many results to share. I'll be populating this database over the coming weeks/months. I'm still hunting for any issues/weirdness with the test so I'm not ready to remove the "Preview" label from it just yet. But the results thus far are very telling.

I'll also report standard deviation for service times to give you some idea of IO consistency. 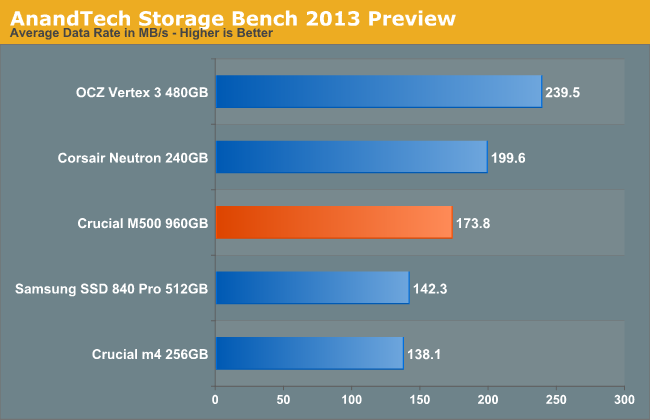 Average data rates already show us something very surprising. The Corsair Neutron, which definitely places below Samsung's SSD 840 Pro in our Heavy 2011 test, takes second place here. If you look at the IO consistency graphs from the previous page however, this shouldn't come as a huge shock. Without additional spare area, the 840 Pro can definitely back itself into a corner - very similar to the old m4 in fact. The M500 dramatically improves IO consistency and worst case scenario IO performance, and it shows.

The SF-2281 based Vertex 3 does extremely well, taking the crown. SandForce's real time compression/de-dupe engine has always given it wonderful performance, even when running these heavy workloads as long as there's some portion of data that's compressible. The problem with SandForce wasn't performance, it was always a reliability concern that drove us elsewhere. 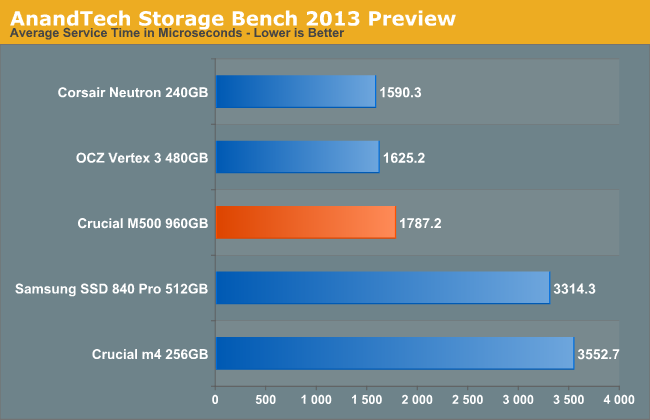 The results are echoed here, and exaggerated quite significantly. The SF-2281 based Vertex 3 does very well as it's able to work as if it has more spare area thanks to the fact that some of the workload can be compressed in real time. I did fill all drives with incompressible data at first, but given that not all parts of the workload are incompressible the SandForce drive gets a bit of an advantage - similar to what would happen in the real world.

Note that the Vertex 3 and Neutron swap spots as we look at average service time. This is exactly what I was talking about earlier. Here we're looking more at how a drive handles bursty (high queue depth) workloads vs. overall performance in our suite. Both metrics are important, but this one is likely more relevant to how fast your system feels. 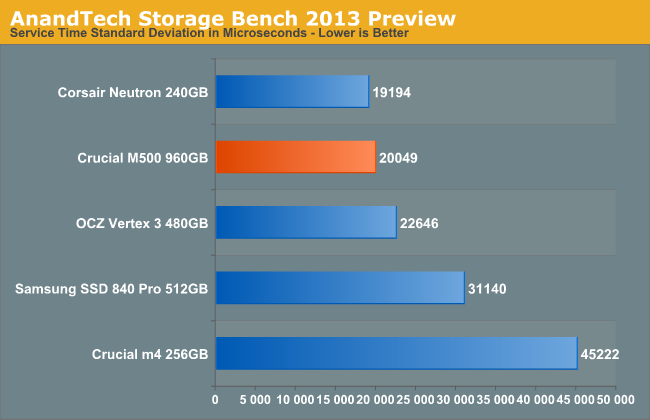 Although the Neutron clearly has the response time advantage, the M500 delivers a remarkably competitive consistency story. Absolute performance may not be great in its lowest performing state, but the M500 keeps things consistent. Comparing to the old m4 we see just how bad things used to be.