As usual, it is helpful to see how much overclocking we can do with this motherboard. We used an AMD Athlon (Thunderbird) 800MHz OEM processor, one 128MB Mushkin PC133 CAS2 SDRAM, and an NVidia Geforce2 GTS 32MB video card. The core voltage and the I/O voltage were stayed at default for fair comparison. We started out by changing the multiplier ratio, and we found that once again the 9.5 setting is the highest we could get before the system became unstable. When we tried to increase the FSB speeds, we found that 104MHz was the highest we could get. At the next setting, which is 106MHz, the system lost its stability. Here we can see the importance of having 1MHz increments between 100MHz and 115MHz. Therefore, the final clock speed we could achieve was 988MHz (105MHz x 9.5).

Just like most other KT133 motherboards, under the PC Health panel inside the BIOS users can look at two temperatures, one for the CPU and one for the system. There are a total of three fan connectors on the AK73 Pro, but it is only possible to read the speed of two of them.

The stability of AOpen boards has helped to gain a great amount of respect for the manufacturer; there was no way they are going to let go of that. In order to maintain the high level of stability that we have come to respect form AOpen, the AK73 Pro utilizes a few well known techniques. First off, AOpen does not focus on using very large size low ESR (Equivalent Series Resistance) capacitors. Instead, they use a greater number of smaller valued low ESR capacitors for a better distribution. The AK73 Pro has a total of thirteen 1500uF capacitors and two 330uF capacitors around the CPU socket and the VIA 8363 North Bridge. Moreover, you can also find six more 1500uF capacitors below the DIMM slots. These low ESR capacitors are very important for high-speed operation, to make sure that there is enough power for the CPU and to ensure the signals are clean enough. 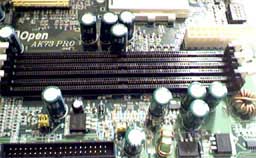 In addition, one will also notice a total of eight voltage regulators on the AK73 Pro; regulators installed to ensure that the power circuit is supplying a steady voltage. Another factor towards stability is the use of surface mounts, something similar to capacitors but are much smaller and found all over the motherboard. Unfortunately, we are not able to learn too much about these devices.

Last of all, and probably the most important part, is the overall layout. One of the things that AOpen considered in the design of the AK73 Pro was the "Frequency Isolation Wall." It basically means that AOpen has tried to separate the motherboard into regions, where each region is running at similar frequency locally. This can minimize a lot of the signal interference that is normally encountered. In addition, AOpen took the time on routing and attempted to make sure that most traces operating at the same clock speed are almost the same length, meaning that the clock signals will arrive at different components at almost the same time.

With all the above effort AOpen put on the AK73 Pro, they once again produced a motherboard that's rock solid. The board crashed a total of 3 times in a 24-hour span during our stability tests, a very respectable amount, and ranked fourth in our KT133 motherboards roundup.