The Real Test: Low Light Performance of the HTC One

The HTC One is really built for the kind of scenarios that I find myself in more of the time armed with only a smartphone — evening, dusk or night time, indoors in low light at a restaurant, with friends at a social get together, at a store, or in the confines of my office. It’s there that the One shows the fruits of its tradeoff between resolution and larger pixels.

First of all it bears going over that there is a known bug with ISO as of this writing on the HTC One, and the issue is twofold. First, setting an ISO manually from the UI doesn’t guarantee that the ISO will be used, instead, this behaves like an upper bound for what ISO the camera software can choose to use. Think Maximum Auto ISO and you’ll get what I’m talking about if you’re a Nikon shooter. This means if you’re in a well lit scene and select ISO 1600, even though EXIF will report 1600 and you’ve selected 1600, it’s up to the ISP to choose whatever it feels is best, probably well short of 1600. If you’re in a dark scene, most of the time the manually chosen ISO will wind up being the one you get, however. HTC also has chosen to prioritize stopping action when a manual ISO is selected, meaning in a dark environment the maximum exposure time appears to be 1/20 of a second. I took a series of images at each of the manually selectable ISOs to demonstrate this, in addition to the Auto (Normal) mode and Night Mode setting. Note that in Auto, HTC also chooses to prioritize stopping motion with a very high ISO of 1520 in this dark scene and with an exposure time of 1/7s. Going to Night Mode will get you shutter times of up to 1/3 of a second, and ISO of basically 800. I spent a lot of time figuring out what the various modes do, and this is it — Auto goes down to 1/7s with maximum ISO of just short of 2000, and Night Mode goes down to 1/3s with maximum ISO of 800. There’s no real documentation about what these do, which is my gripe with the modal approach to camera UX.

I setup the lightbox scene with a controlled 4 lux illuminance. This is quite dark, around twilight level brightness. Here the difference between phones is dramatic. In Auto mode we see the HTC One reach out to the extreme end of its auto exposure behavior, with ISO of just shy of 2000 and exposure of 1/7s. In Night mode, we get a lot less noise thanks to ISO 800 and a longer 1/3s exposure. Other than the Lumia 920 the rest of the cameras basically aren’t even close, as the iPhone 5 is able to get a decently bright image but has a ton of chroma and luma noise even with 2x2 binning. The G Pro in its night mode reaches out to ISO 1000 and takes a longer 1/8s exposure, but still has noise and looks darker than ideal. Samsung has a curious night mode which appears to take a bunch of exposures and combine them, and doesn’t record any exposure data in EXIF, in auto mode the Note 2 matches the G Pro’s ISO but takes a 1/15s exposure and comes out completely black. Only the Lumia 920 can come close to the One by setting up an exposure with similar configuration to the One’s Night Mode - 0.3 second exposure at ISO 800. I threw in a D300S (5.5 micron pixels, 12.3 MP DX format) with the 35mm F/1.8 at ISO 1600 just for comparison as well for those that maintain smartphones are as good as DSLRs — that clearly is not the case yet.

Pretty much the only viable contenders to matching the One in low light are the Lumia 920 thanks to OIS and iPhone 5 thanks to its 2x2 binning. In the case of the Lumia 920, its OIS allows it to take quite long exposures of up to 0.3 seconds, and in the case of the iPhone 5, 2x2 binning allows Apple to push ISO to the incredibly high 3200 without noise getting too out of control.

Update: A lot of people have asked for the low light mode from the Note 2, which I've gone ahead and included. Note that the Note 2 is essentially also a proxy for SGS3 performance since they share the same imaging system. What's curious about Samsung's low light mode is that it doesn't record any EXIF information at all beyond make and model, making it very hard to tell what the total exposure time is, and thus how succeptible to hand shake it is outside without a tripod. I've found that in practice night mode requires the shooter to be extremely stable and suspect this mode takes multiple images and then computationally merges them afterwards into the final result, which also results in the processing bar popping up. It's an interesting and necessary comparison to make however, even if it doesn't change my conclusions about the One's camera.

I went out at midnight with the HTC One, Lumia 920, and iPhone 5 to shoot some camera comparisons in the bracket and get a feel for how they perform in real world use. I took these photos with all three cameras on full auto, since again there’s broken ISO controls on the HTC One at the moment, since no smartphones will let me set all the exposure settings manually (despite repeated pleas), and finally since that’s honestly what normal users are going to do most often.

The Lumia 920 and One are pretty darn close when it comes right down to it, and both easily outclass the iPhone 5 and the rest of the Android landscape in dark settings. The One is slightly noisier than the Lumia 920 in some of these, and it took me a while to figure out why that was.

In auto mode, the Lumia 920 pushes its OIS further with longer 0.3 second exposures, while the One maxes out at 1/7s (0.143 s) and a higher ISO. I took all these comparison photos before discovering the awesomeness that is Night Mode on the One, which enables the One to push out to 0.3 seconds as well with ISO 800 as the maximum, essentially matching the Lumia 920.

To figure out what was going on, I took a ton of photos in the dark that evening, and put them through my python scripts which parse EXIF and made some histograms. 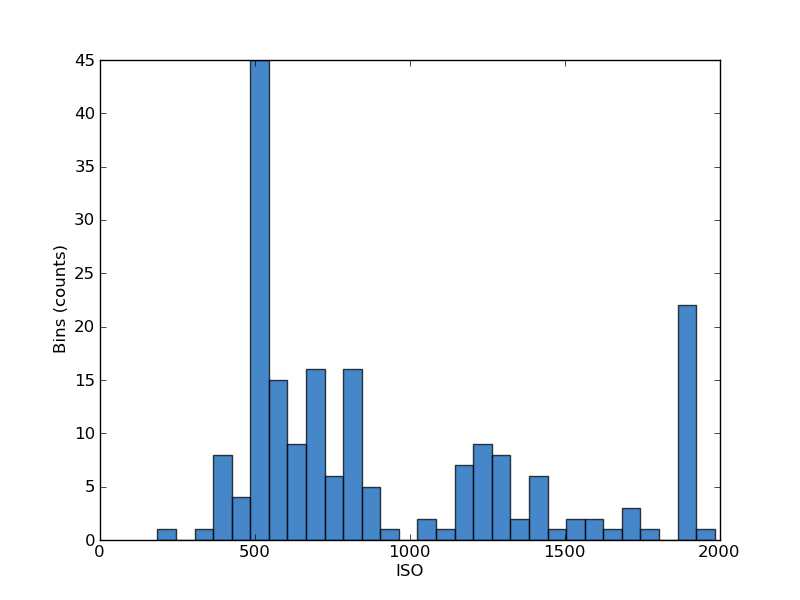 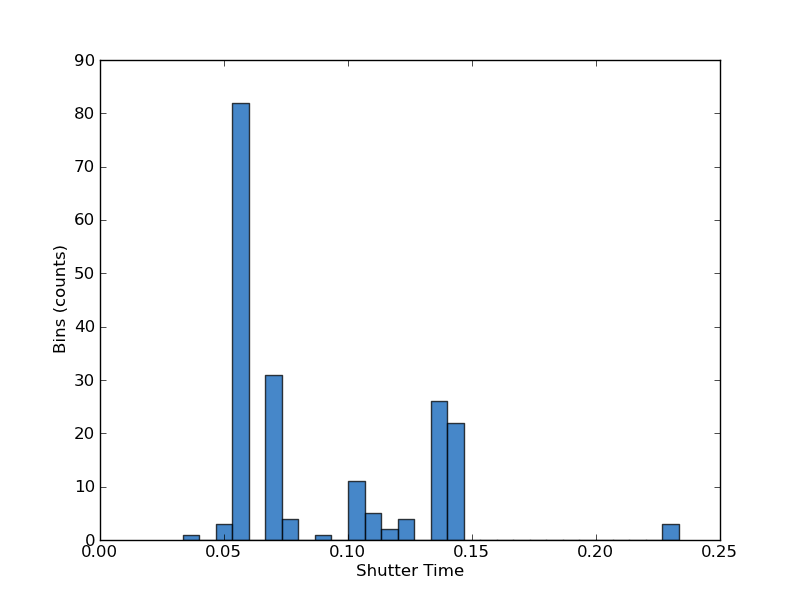 What comes out really tells how each OEM tunes their camera. Apple sticks to two exposure times and just a handful of sensor gain settings, everything above 800 is the 2x2 binned mode. Nokia meanwhile caps ISO at 800 by default, and in their menu, since it’s probably the highest gain the CMOS exposes, and has to push exposure time out to 0.3 seconds a lot, there’s one outlier at 0.5 seconds as well. Meanwhile HTC basically caps everything at 1/7s and ISO 2000 on the One unless you enable Night Mode (which is that one outlier).

What sticks out at me is that the out of box shooting experience on the One rivals the Lumia 920 with shorter exposures by default, and if you force Night Mode on it gets even better. As a result, shot to shot latency on the One even in extremely dark settings is incredibly fast, whereas the Lumia 920 takes much longer. An even bigger difference is in the camera preview — with the One the preview is basically exactly what you end up getting most of the time, it’s bright, full res, and well lit. On the Lumia 920 the preview is usually dark until you run a capture, and then see a well lit scene in the final captured image. 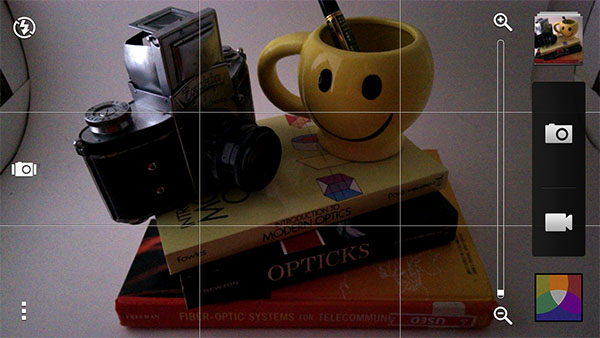 I honestly don’t think the Lumia 920 comparison is the end of the world either, since the One runs Android and the Lumia runs Windows Phone 8. There’s really not a lot of cross platform shopping, and I doubt that camera is going to be enough to put anyone over the ecosystem hump either way, it’s just interesting to compare two smartphones with OIS.

What’s important for HTC is whether the One is the best shooter among Android phones, and that is definitively the case right now. In low light scenarios that are important to me, the One makes the difference between a totally dark image and something usable. It’s only outdoors in broad daylight that the resolution tradeoff is occasionally difficult to stomach, but only if you’re viewing images 1:1 on a computer. Viewed at 1080p or shared online with most services, the One ends up being more than adequate and at the same time able to reach out in low light.

I've taken a huge number of photos on the HTC One and uploaded 117 of them for your perusal straight out of the camera into a gallery which I also included earlier.

I think the tradeoff that HTC has made with the One is an ambitious one and the correct industry direction. It’s awesome to see an OEM other than Nokia continue to prioritize camera on their smartphones, and the One is absolutely the smartphone I’m reaching for to take photos now. I strongly believe that against 13 MP shooters, the One will be even more competitive since what I’ve seen so far of images from cameras with 1.1 micron pixels isn’t a pretty picture. My only big unfulfilled wishes were for the One to have a dedicated camera button and in-box tripod mount.