In and Around the AZZA Silentium

Grief over the odd-numbered USB ports notwithstanding, I found a lot to like about the Silentium's exterior design. It seems a little bulbous in places, but there's some thought in regards to function that went into it, and as a whole AZZA manages to keep the case away from being an ostentatious "g4m3r"-oriented product. 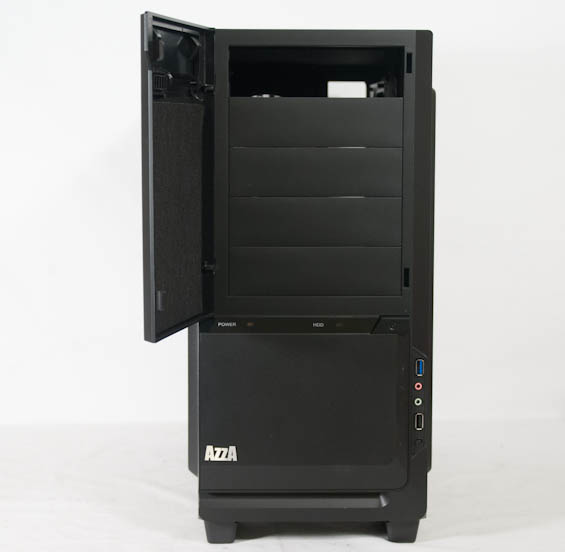 The front of the Silentium gets a little close to gaudy, but it's extremely smart and functional. AZZA is able to avoid the end user having to open the front door by actually including a fold-down front flap that hides the optical drive (assuming there's an optical drive in the top bay). This is good, because the plastic snaps that hold the door shut don't feel super sturdy (magnets would probably have been preferable here). The bulge beneath the door actually hides the 120mm intake fan, which pulls in air from the bottom. Above it are the indicator LEDs and the power button, and to the left are the front panel I/O. For the most part I like the look of the Silentium, but there are ways AZZA can improve this design further still: five front bays are unnecessary; AZZA could've gone down to two and added a second intake fan, and they'd be fine.

You'll notice that the sides and top of the case are closed off, but the sides themselves are extruded. This is a way to increase interior space so that the thick acoustic padding in the side panels doesn't actually cut into it. It also helps tremendously in providing space behind the motherboard tray: the padding is soft and pliable, and it's easy to squish cables into it without having to fight to put the panel back on. Finally, the rear of the case is business as usual, though I'm not sure what purpose the radiator tubing holes serve on a case like this (or really any modern case.)

The side panels are held into place with thumbscrews, and slide into notches. Maybe I'd been spoiled by so many cases that use hinged side panels before the current batch of cases, but the notched panels are always a royal pain to remove and replace. I really hope the savings in manufacturing is worth it, because this definitely passes real inconvenience down to the end user when they have to put the case on its side to put the panel back on. 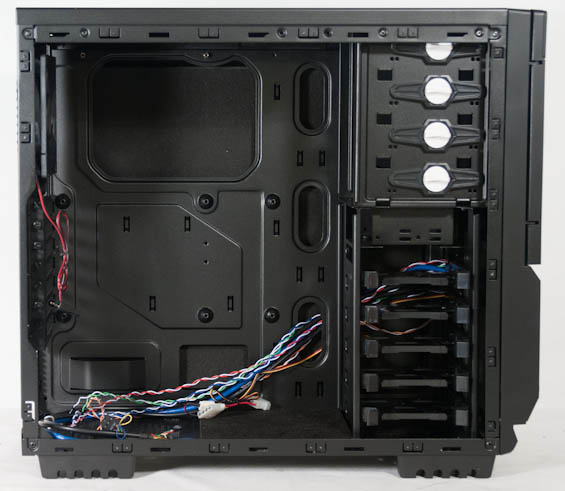 Unfortunately, while the exterior design of the Silentium is for the most part fairly intelligent, the interior suffers from some poor design choices. AZZA does include toolless drive trays that support both 2.5" and 3.5" drives, as well as toolless snaps for 5.25" drives and even a dedicated external 3.5" bay. They also have parts of the motherboard tray extruded specifically so you don't have to install many (or any) motherboard standoffs.

Where AZZA loses points is in the mess of cable headers (needlessly cluttered as a result of the odd-numbered USB ports), and both surprisingly and damningly, there is no routing hole in the motherboard tray for the AUX 12V line. None! I'm genuinely confused as to why this isn't here, since it's been Motherboard Cabling 101 since routing holes were introduced.

As for cooling, there are just the two 120mm fans and no fan controller of any kind, so we have to hope that AZZA chose its fans well. It should be obvious that while other silent cases have tried to straddle the line between performance and silence, AZZA aimed squarely at silence. After building, when we get into testing, that's what we want to watch in our stock configuration.