The Global WIN FOP32-1 and FOP38 are the successors of the popular FKP32. The FOP32 (without -1) was only available on the market for a very short time, since it is not Socket A compatible.

The FOP32-1 and FOP38 use the same extruded heatsink with a very conventional design. The only difference between the two models is the fan - the FOP32-1 uses a YS Tech 27CFM fan, the FOP38 a Delta 38CFM fan.

Both the FOP32-1 and the FOP38 ship with a blister pack of thermal compound. 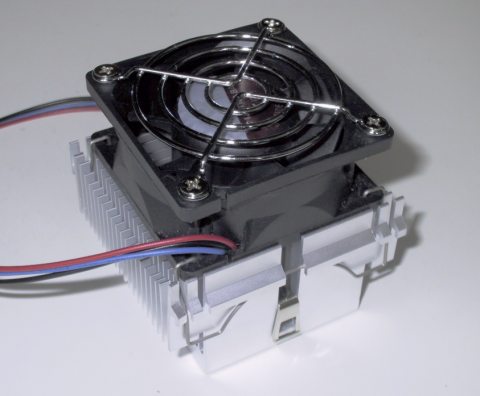 The picture shows the FOP38. The FOP32-1 looks very similar, except that it doesn't have a fan grille.

Both the FOP32-1 and the FOP38 performed very well. The FOP38 reached second place, the FOP32-1 performed on par with the Alpha PAL6035 equiped with the same fan. This shows that it doesn't necessarily take extravagant designs or production methods to reach good performance - a conventional extruded heatsink with fine fins can do a good job as well.

Because of its 7000rpm fan, the FOP38 is so excessively loud that we would recommend it only for servers that are located in separate rooms where nobody is working. Even when wearing headphones, the noise is still very disturbing. The FOP32-1 is also quite loud, but nowhere near the FOP38.

Thanks to its narrow base, the FOP32-1 and FOP38 will fit all motherboards. Installation itself takes quite a lot of force; since a high pressure between CPU and heatsink is recommended for Athlon and Duron CPUs. Still, Global WIN could have made installation a lot easier by using a clip with a longer handle.