The Thermaltake "Chrome Orb" is a Athlon/Duron compatible version of the popular "Golden Orb", with a different clip, a new base plate, and a stronger fan. 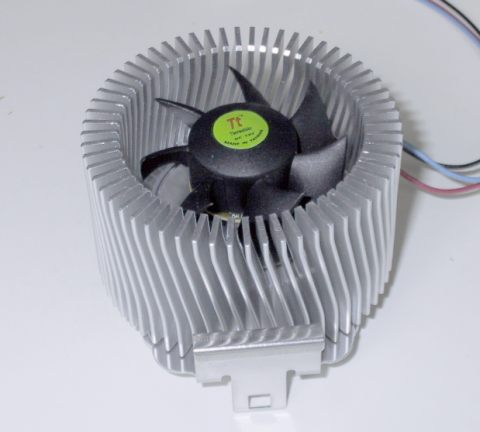 The Chrome Orb's performance is ok - it is not quite as efficient as its big brother Super Orb, but still it does a good job keeping CPUs cool enough. It is even suitable for moderate overclocking. Our Thunderbird-750 overclocked to 950MHz would run perfectly stable with the Chrome Orb. Also, it is inexpensive and not too loud.

Just like the Super Orb, the Chrome Orb does not fit the Abit KT7 and the Epox 8KTA+, because capacitors right next to the CPU socket are in the way. Instructions for a modification and photos are available here on The Heatsink Guide. With the Chrome Orb, there's no risk of damaging the CPU when installing the cooler (which was a major problem with the Golden Orb, when used with AMD CPUs)