Like the A6, the 4th generation iPad's A6X integrates two custom designed Apple Swift CPU cores that implement the ARMv7 instruction set. The two cores share a 1MB L2 cache, just like they do in the iPhone 5's A6. I spent a lot of time characterizing the architecture and performance of Swift in our iPhone 5 review, so I won't go over a lot of that here. What I will say is that Swift manages to be the best balance of performance and power efficiency in an ARM based CPU core available today. Swift looks a lot like Apple's take on Qualcomm's Krait core. It's not a Cortex A15 competitor from a performance standpoint, but likely a more power efficient design.

Unlike what we saw in the previous iPads, the A6X only boasts a marginal increase in max clock speed (~7%) over the A6. The two Swift cores can run at up to 1.4GHz in the A6X compared to 1.3GHz in the A6.

CPU performance improves substantially over the 3rd generation iPad thanks to the Swift cores. Unfortunately, big gains in CPU performance aren't always apparent in actual use. The iPhone 5 seemed to subjectively gain more from the move to A6, partially because of just how frequency constrained the A5 in the 4S was. The A5X CPUs in the iPad 3 were already running 25% faster than the A5's CPU cores.

I didn't notice appreciable differences in application launch times, but there are a few areas were the faster CPU cores definitely stand out. Auto enhance in iPhoto completes quicker on the iPad 4 vs. its predecessor. This is especially true for work on large (high MP) images. I don't think a pair of Swift cores is all it takes to make the iPad 4 a suitable photo retouching workstation but it's better than the previous model.

Scrolling around iOS Maps in 3D view is substantially smoother on the 4th gen iPad compared to its predecessor. We noticed something similar in our comparison of the iPhone 5 and 4S. Web pages do load quicker on the iPad 4, although the differences can be small depending on the complexity of the page in question. The real world responsiveness benefit from the faster CPU cores seems to be in the 10 - 30% range depending on what you're doing. The problem is at the lower end of the scale, it can be difficult to really feel if you're comparing the 3rd and 4th gen iPads.

We're still very limited in good, cross-platform CPU benchmarks. We, once again, turn to JavaScript tests run in the browser. For all of the tablets tested here we're using Chrome for Android and Mobile Safari for iOS.

SunSpider has been a part of all of our mobile performance testing for quite a while now. It's not the perfect benchmark, but the test ends up being a good measure of browser performance as well as cache latency and CPU performance. 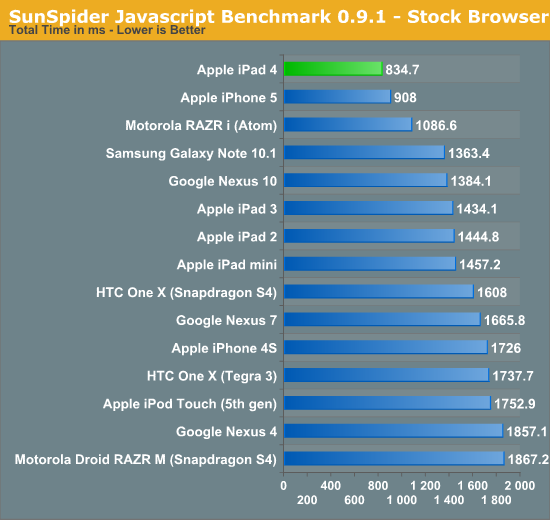 The Swift cores do an excellent job here thanks to their much improved memory performance. The Nexus 10 should be competitive however the current state of browser optimizations hold it back a bit here.

Google's Octane benchmark is a much larger test than SunSpider, but we're still looking at JavaScript performance. Octane includes all 8 of the tests from Google's older V8 benchmark but adds 5 new ones including a PDF reader, 3D bullet physics engine and portable 3D game console emulator all built in javascript. 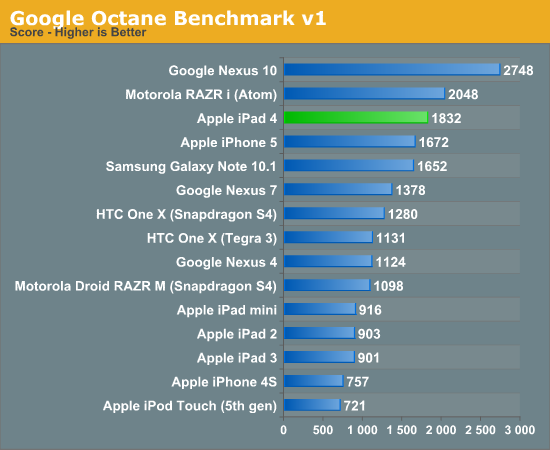 Octane tells a very different story. The iPad 4 does very well, but the Nexus 10's Cortex A15s are really allowed to shine here. The A15 is simply in a different league of performance. 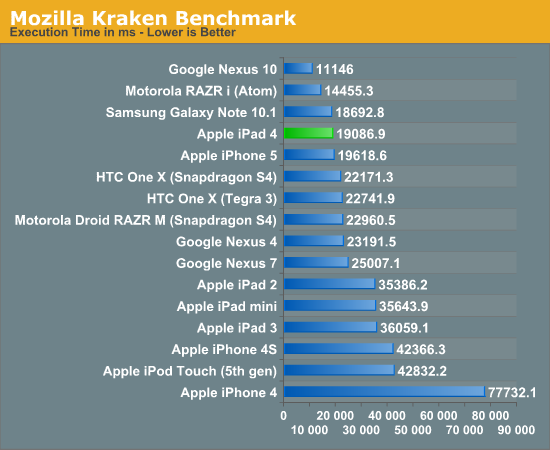 We see a similar story with Kraken. Apple improved CPU performance tremendously over the iPad 3, but the Nexus 10 is able to reach new heights.

Why don't we see a direct correlation between these CPU bound js tests and the real world performance numbers I mentioned above? The problem is that most of today's iOS apps are really built for the sort of performance that a pair of Cortex A9s can deliver. I see pockets of CPU bound activity but it's not consistent enough where you're going to necessarily see a dramatic improvement in responsiveness across the board. I do believe the gap is more apparent on the iPhone thanks to the huge difference in frequency between the 4S and 5, but on the iPad the range from subtle to noticeable differences is broader.

A look at Chipworks' die shot reveals the same memory interface arrangement as we saw in the A5X: 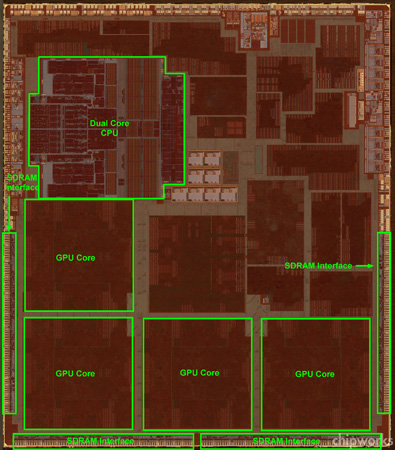 The A5X/A6X place the memory interface blocks (and perhaps the controllers themselves?) adjacent to the GPU, while the A5/A6 more tightly integrate the CPU and memory controller. This highlights a pretty substantial difference in priority between the A5/A6 and A5X/A6X SoCs. The latter really do prioritize memory bandwidth delivery to the GPU, and for good reason. The Retina Display equipped iPads have over 4x the number of pixels as the iPhone 5. 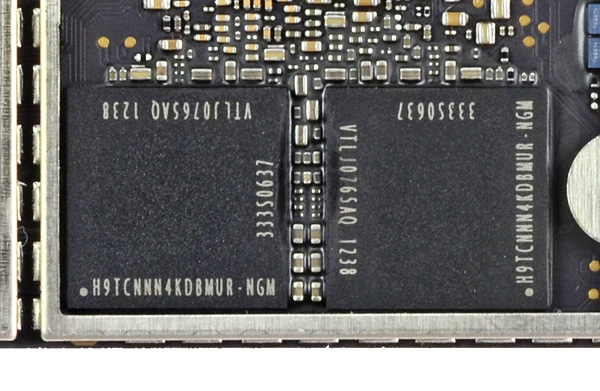 The 4th generation iPad that iFixit took apart had 1GB of Hynix LPDDR2-1066 on-board, which would indicate a small increase in memory bandwidth. Just as we saw with the A5/A5X comparison, the additional memory bandwidth doesn't appear to be available to the CPU cores - only the GPU cores. 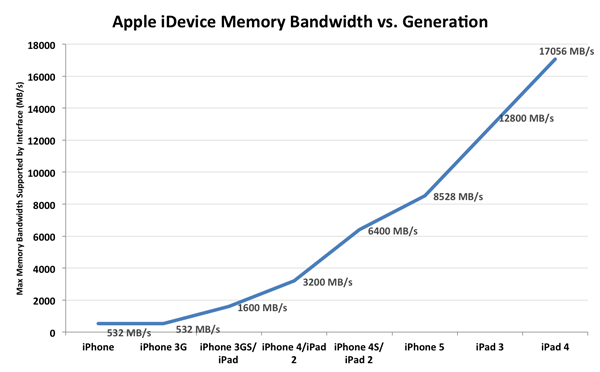