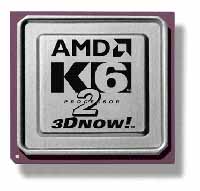 Arriving May 27th, 1998, the K6-2 was a revolutionary product for AMD. Unlike the original K6 series processors, the K6-2 did not suffer from product shortages or delayed shipment dates. Instead AMD sent the K6-2 out with a bang, not only meeting customer's demand expectations but also their speed expectations.

Based on a 0.25 micron fab, the K6-2 was the first AMD chip to feature a 100 MHz front side bus, courtesy of the Super7 spec. Aimed at competing with the more expensive 100 MHz front side bus Pentium systems, the K6-2 often gave Pentium systems a run for their money. The chip also featured support for 3DNow! instructions for SSE type optimizations as well to aid in system speed.

Often, the K6-2 was tagged as a budget processor with a bang. Costing less than a comparably clocked Pentium II processor, the K6-2 series processors often times performed only slightly slower than their more expensive counterparts. For this reason, the K6-2, matched with a Super7 motherboard, 64 MB of RAM (the standard around the time of the K6-2), a NVIDIA Riva128/TNT or 3dfx Voodoo 3 2000/3000, and a ATA-33 5400 RPM hard drive, made the perfect system for many price conscious consumers. In fact, at its peak in about mid to late 1998, such a system could compete with many of Intel's faster offerings.

With the success of the K6-2 processor that found its way into so many systems, AMD could not stop there with the Super7 systems. For better or for worse, AMD pushed on, releasing the K6-3 processor in February of 1999. The K6-3 was very similar to the K6-2 processor, with really only one major change: the inclusion of 256K on-die L2 cache running at full processor speed. In the case of the K6-3, the processor was produced to breathe new life into aging Super7 systems.

Upon K6-3's release, AMD's Athlon processor had already been quite hyped. The K6-3 was to serve as an intermediate product; a last resort upgrade for K6-2 owners who could not wait for the Athlon as well as a lower end competitor to the Athlon processor. This proved convenient, as nearly every Super7 board with at least moderate technical support was able to support the K6-3 via a simple BIOS flash.

The inclusion of the extra cache was enough to boost the performance of an aging architecture somewhat, once again boosting the K6 series up to par with some of Intel's higher end systems. One downside of the extra cache was the extra cost. Still cheaper than the cost of the Athlon upon its release, the K6-3 proved to be quite a bit more expensive than a comparably clocked K6-2. The main appeal, however, was its backward comparability with older Super7 motherboards: a feature neither the Athlon nor any Intel product could boast.

As you can see, both the K6-2 and K6-3 processors were quite competitive for their time. Cheaper than other competing processors, K6-2 and K6-3 systems still ended up costing quite a bit of money. Thus it is easy to see how one could be a bit reluctant to throw out a system that once ran with the best of them.