Don't push the voltage too far. According to AMD, the maximum voltage for Athlons is 1.85v and 1.70v for Durons. Since they are both essentially based on the same core and come out of the same fab we can say that the Duron is safe up to 1.85v as well, the reason for the difference in maximum voltage there is because with the Athlons you have to worry about maintaining a high yield on twice as much cache, thus the need for a higher voltage (the more voltage you supply, the higher the yield as you're giving the CPU a greater tolerance range to work in).

Keep a careful eye on your core temperature. It is normal for 1GHz and faster Athlons to run at temperatures in the low 50s (Celsius), however by using a recommended heatsink/fan you can easily keep your CPU running in the 40s or maybe the high 30s. If your core temperature ever gets above 60C then you have reason to be worried. While that's within the CPU's operating limits, none of the currently available Athlons should ever run that hot if you're using proper cooling.

Something we discovered while reviewing cases not too long ago was that as long as you have a well ventilated case (i.e. not a cramped mini-tower) and you have a decent heatsink/fan for your CPU (we use the TaiSol unit pictured here) adding additional fans to your case won't help decrease your core temperature by any measurable degree. The only time you'll need to add extra fans is if the air being circulated inside your case is too hot to be doing any good. For even the fastest Athlon systems with a well designed case and a good heatsink on the CPU, all you should need in terms of additional cooling is another intake or exhaust fan placed at either the front or back of the case depending on its function (intake at the front, exhaust at the back).

Another big issue regarding Athlons and Durons that isn't related to overclocking directly is the issue of "crushing" your core when mounting your heatsink on the CPU. In order to dissipate the 60W+ of heat that the fastest Athlons are producing, heatsink manufacturers have resorted to producing some very large heatsinks. But in order for these heatsinks to actually serve a useful purpose they must make good contact with the core. If you've ever seen an Athlon or a Duron, you'll quickly realize that getting such a great amount of heat away from such a small surface area isn't an easy task. 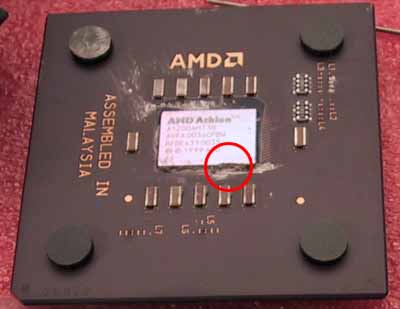 The only way to avoid this is to follow the age old axiom, slow and steady wins the race. Attach one end of the heatsink clip to the socket, reposition the heatsink if it moved at all, and apply pressure to the other end in order to get it to latch. 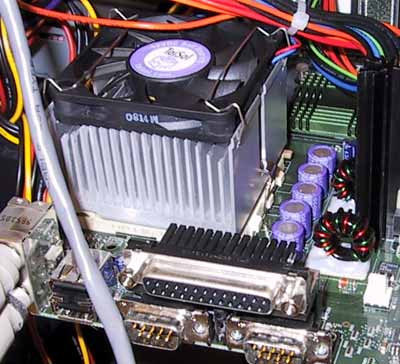 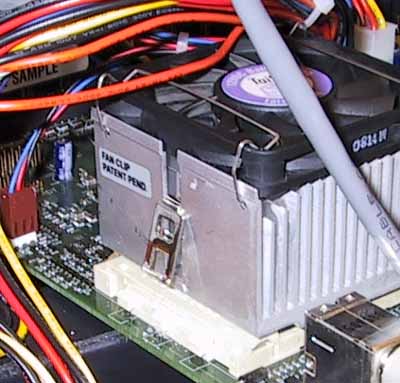 It often helps to use a flat head screwdriver to give you some leverage in making the other end of the clip hook onto the socket. Simply slide the flat head into the little hook on the end of the clip bend outwards and push down at the same time to the point where you can let go and the clip will attach itself to the CPU socket. 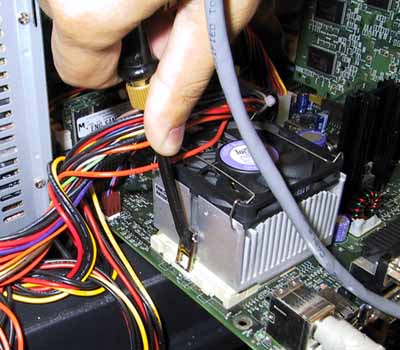