The iPad mini features an integrated 16.3Wh battery, easily smaller than the 43Wh unit in the iPad 3/4 but even smaller than the 25Wh used in the iPad 2. Given that the mini has roughly the same internals as the iPad 2,4, but with a substantially smaller battery, you can expect a corresponding decrease in battery life. The display is also smaller, which should reduce some of the power requirements a bit. 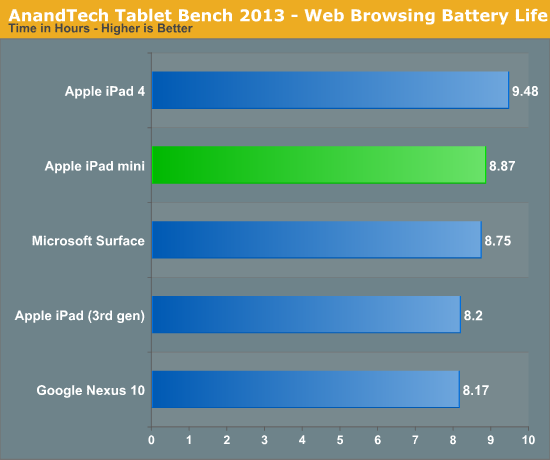 The mini actually outlasts the 3rd gen iPad in our heaviest WiFi web browsing battery life test, but the 4th gen iPad's move to a 32nm SoC solves that problem. Under load however both the new iPad and the mini are fairly close in terms of battery life.

We haven't yet rerun our new test on all of the tablets, so we turn to our older 4th gen test to provide some additional reference points: 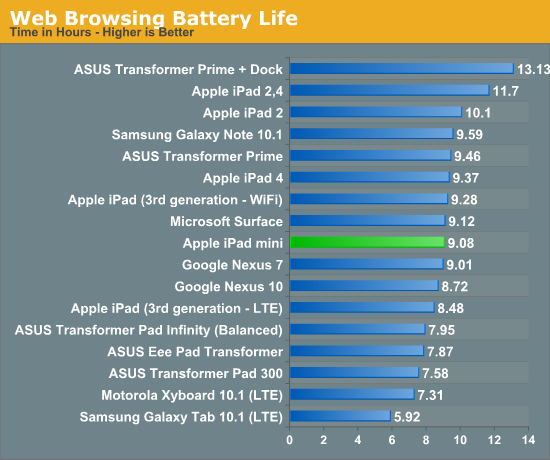 If we look back at our older test we get good perspective on everything. The iPad 2,4 still remains the king of single battery tablets, and the mini just barely makes it over 9 hours of use on a single charge. The mini still lasts long enough for it to be more of an all-day device than a notebook. 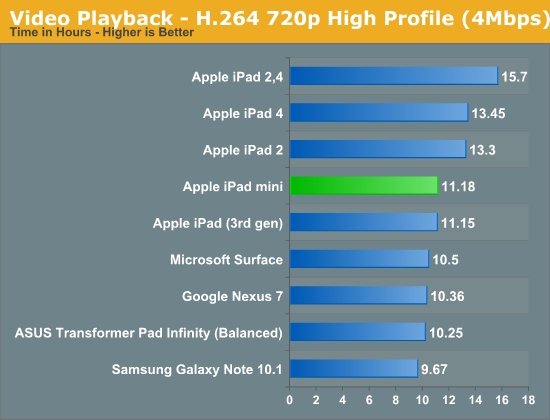 Apple's video decode hardware implementation has always been stellar, as a result the mini manages to do very well here. At over 11 hours of video playback on a single charge, the mini is only bested by some of its larger iPad brethren. The iPad 2,4 remains insanely awesome here.

Our final cross-platform battery life test is the new GLBenchmark 2.5.1 Egypt HD test. Here we have a loop of the Egypt HD benchmark, capped to 30 fps, running on all of the devices with their screens calibrated to 200 nits. 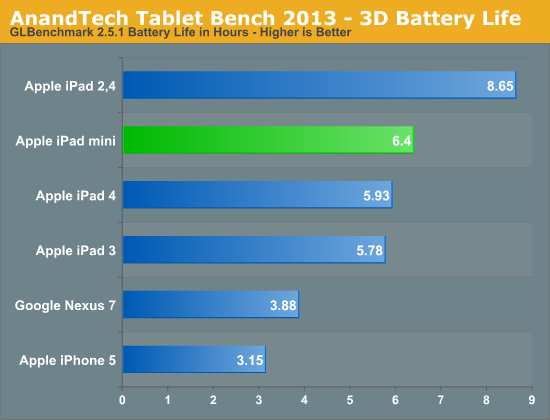 I no longer have a 45nm iPad 2 so I don't have results for it here, but the combination of the small 1024 x 768 display and 32nm A5r2 silicon gives the mini better battery life than the iPads equipped with a Retina display. The iPad 2,4 continues to offer amazing battery life here.

The GLBench battery life test gives us a reasonable minimum for the iPad mini's battery life, with the video playback test giving us a good maximum. You can expect to see 6.4 - 11.2 hours out of a single charge from the mini.

The mini comes bundled with a 1A charger identical to what you get with an iPhone 5 or a 5th gen iPod Touch. Using the new Lightning connector it'll take about 4 hours to complete a charge on the iPad mini.