ABIT has begun using the Winbond W83627HF-AW Super I/O controller, which includes integrated hardware monitoring support.  In the PC Health panel of the BIOS, you can read about the temperature of the CPU via the CPU’s on-die thermal diode.  Users can also read the system temperature as well as one more temperature using the external thermistor header.  Unfortunately, ABIT does not include the thermistor cable like they have in the past.  Moreover, there are three fan connectors on the motherboard, and users can read the speeds of all those three fans in the PC Health panel.  Last of all, the CPU core voltage is shown in the panel, but not the AGP voltage. 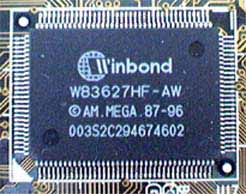 In the past, ABIT motherboards always had stability problems, but that has changed over the years.  Now ABIT motherboards are among the best when talking about stability.  For the SE6, ABIT puts a total of 17 1500uF capacitors around the CPU socket and the 82815 GMCH.  During our stability tests, setting the memory CAS latency to 2resulted in reduced stability.  On the other hand, if we set the CAS latency to 3, the board was once again rock solid in our stability tests.  That means if you prefer to have a stable system, even with a CAS 2 memory, you lose that 3 – 5% performance margin.

The 82815 Graphic and Memory Controller Hub (GMCH) sits to the left of the CPU socket, which is the core of the i815 chipset.  It has an integrated i752-based 3D video.  One serial port is replaced by the VGA connector at the back of the motherboard.  However, from our Intel i815 chipset article, you can see that the integrated i752 performs quite poorly.  It might be enough for users who do not use any 3D accelerated applications, but for most users out there, the on-board video is definitely not acceptable.  Therefore, ABIT puts in an AGP slot so users can put in any video cards of their choice just like other i815 boards out there.  The AGP slot is a "universal slot," so users can put in almost any AGP cards.  ABIT also put in a connector beside the AGP slot, where users can plug in an add-on card and allows the on-board video to be output to TV-Out or Flat Panel LCD monitors.

The SE6 has three DIMM slots, supporting a maximum of 512MB SDRAM.  To most users, 512MB memory is more than enough now, but this might not be the case in the near future.  Also, currently a decent servers or workstations still requires 1GB or more memory, so 512MB is definitely not enough.  This is not a fault of ABIT though, but rather is a limitation of the i815/i815E chipsets.  Further, the i815/i815E chipsets also have some constraints on memory types.  If users want to use PC133 SDRAM, only the first two DIMM slots can be populated.  If users want to use all three DIMM slots, the memory will have to run in PC100 mode.  If you don’t feel like following the specifications put forth by Intel,  the SE6 does have the option to run all modules in PC133 mode, but the system became highly unstable in our testing when we enabled this option.  So far, the ASUS CUSL2 is the only i815E solution that we have tested that can run all three DIMMs in PC133 mode without sacrificing stability.

Below the first and second PCI slots you can find the 82810BA I/O Controller Hub 2 (ICH2), which is what differentiates the i815E chipset from the i815 chipset.  The i815 chipset, which uses the 82810AA ICH1 South Bridge, only has Ultra ATA 66 support.  The 82810BA ICH2 not only features Ultra ATA 100 support, but also a second USB controller and the Intel 82559 network controller.  There are two IDE channels on the board allowing up to 4 IDE devices (2 devices per channel).  The second USB controller allows two more USB devices on top of the original two.  The original USB connectors are located at the back of the I/O panel, and ABIT puts the extra two USB headers on the front side of the motherboard.  However, ABIT does not include the necessary USB bracket, something they have done for the KT7-RAID, to take advantage of the extra USB ports., So you will have to get their own expansion bracket or a USB hub if you want to connect more than two USB devices.

Like most i815E solutions we have seen, the SE6 features the 6/0/1/1 (PCI/ISA/CNR/AGP) expansion slot setup.  The 6 PCI slots should be enough for most users.  The CNR slot is shared with the sixth PCI slot and utilizing the 82559 network controller integrated in the 82810BA ICH2.  The integrated network controller supports 10Mbps Home PNA 2.0 or 10/100 Ethernet depending on the CNR card that is plugged in.  However, currently we only see a handful of suppliers on CNR cards, which is unfortunate because the 82559 network controller is quite good and the CNR cards are relatively cheap.

The SE6 uses the Avance Logic ALC100 AC'97 CODEC as their on-board sound solution.  This can provide some basic sound for users on a budget, but for those who are serious about sound should definitely go for a true hardware-based PCI solution.  Make sure to read our Speaker Buyer’s Guide as well as our growing collection of Sound and Speaker reviews. 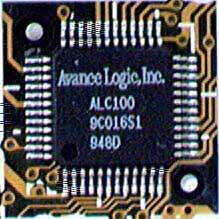 ABIT’s manuals are always highly regarded, and the SE6 is no exception.  It gives users a step-by-step installation and a configuration guide for their system, from how to install the motherboard, information on the jumpers / connectors, BIOS settings, all the way to drivers setup.