Surface features an integrated 31 Wh battery, which is larger than what’s in the iPad 2 but smaller than what Apple used for the iPad 3.  Charging duties are handled via a 24W power adapter with a custom magnetic connector.

Of all of the aspects of Surface, the charging connector feels like the least well executed. For starters, the connector is quite long – about twice the length of a MagSafe connector. Secondly, the magnets in the connector aren’t all that strong so the attraction to Surface isn’t very confidence inspiring. The third issue is alignment. Because of the 22-degree beveled edge on Surface, you have to approach mating the power connector to the tablet very carefully. More often than not I’d have the connector match up but not fully connect. It usually required a few minor adjustments to get the connector to actually start charging. My final complaint is about the power indicator LED on the connector itself. The LED only glows white and gives no indication of whether or not the device is done charging. Furthermore, it doesn’t even glow all that bright, making it hard to tell in daylight whether the device is even getting power. I’m pleased with virtually all aspects of Surface’s physical design, but the charging port and connector need to be redone for the next generation. 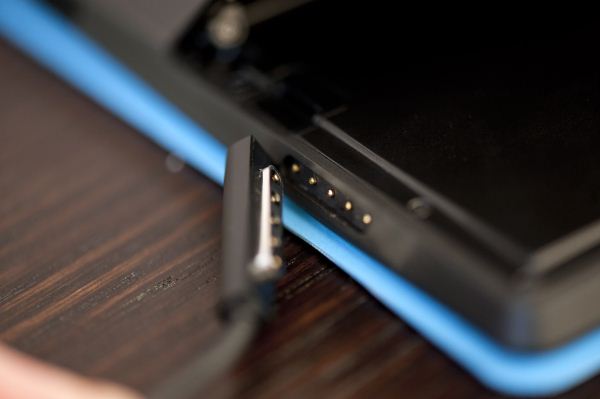 The power adapter itself is larger than the 10 – 15W units you get with most tablets in this price range, but it is also a considerably larger power supply. You can take Surface from completely empty to fully charged in a little over 3 hours hours. You can also get Surface up to 50% power, while using the device, after just over an hour of being plugged in. Microsoft wanted to prioritize real world productivity scenarios where you had a limited amount of time to charge but also needed to use the device. The larger power adapter and not gigantic battery were the right balance to meet those needs. 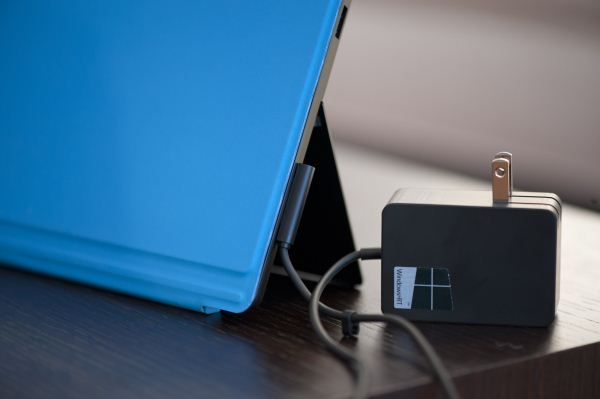 The power brick features a Windows RT logo, but is otherwise clean. The surface of the adapter is a nice soft touch plastic. The two prongs for US models stow away neatly in the adapter. The power cable is nice and long at around 1.5m. There’s no built in cable management other than a little U to keep the connector attached to the end of the cable.

To measure battery life I put Surface through our 2012 tablet battery life suite. All tests were run with the display calibrated to 200 nits and with Surface, its Touch Cover was attached. 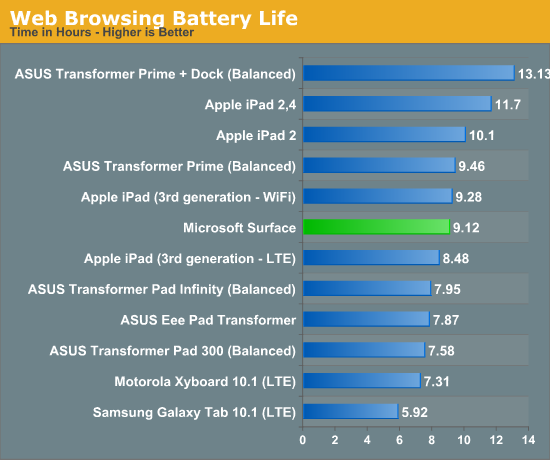 Overall battery life is pretty competitive with the iPad. In lighter use cases Apple pulls ahead slightly, but if you look at our updated web browsing test the heavier CPU load pushes Surface ahead of the third gen iPad. It’s not clear how the 4th gen iPad would stack up in this comparison. 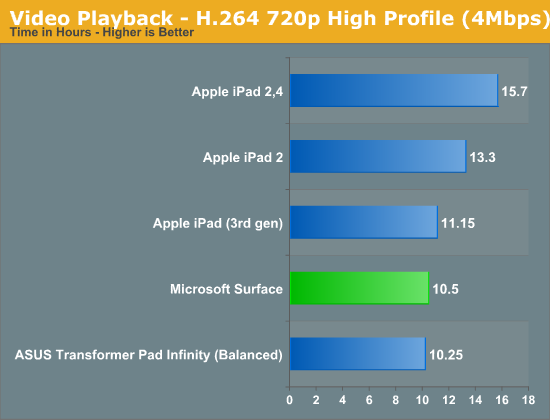 Video playback is also decent for Surface, although Apple manages to pull ahead with the win there as well. The bigger accomplishment is that we’re seeing a Windows device with battery life that’s comparable to other tablets running mobile OSes designed from the ground up.

Microsoft has the right OS platform to be competitive in this space. With some more power efficient hardware I could see a future iteration of Surface moving its way up these charts.