The 2GB Question & The Test

If it seems to like 1GB+ video cards have been common for ages now, you wouldn’t be too far off. 1GB cards effectively became mainstream in 2008 with the release of the 1GB Radeon HD 4870, which was followed by 2GB cards pushing out 1GB cards as the common capacity for high-end cards in 2010 with the release of the Radeon HD 6970. Since then 2GB cards have been trickling down AMD and NVIDIA’s product stacks while at the same time iGPUs have been making the bottoms of those stacks redundant.

For this generation AMD decided to make their cutoff the 7800 series earlier this year; the 7700 series would be 1GB by default, while the 7800 series and above would be 2GB or more. AMD has since introduced the 7850 1GB as a niche product (in large part to combat the GTX 650 Ti), but the 7850 is still predominantly a 2GB card. For NVIDIA on the other hand the line is being drawn between the GTX 660 and GTX 650; the GTX 660 is entirely 2GB, while the GTX 650 and GTX 650 Ti are predominantly 1GB cards with some 2GB cards mixed in as a luxury option.

The reason we bring this up is because while this is very clear from a video card family perspective, it doesn’t really address performance expectations. Simply put, at what point does a 2GB card become appropriate? When AMD or NVIDIA move a whole product line the decision is made for you, but when you’re looking at a split product like the GTX 650 Ti or the 7850 then the decision is up to the buyer and it’s not always an easy decision.

To try to help with that decision, we’ve broken down the performance of several games on both cards with both 1GB and 2GB models, listing the performance of 2GB cards relative to 1GB cards. By looking for performance advantages, we can hopefully better quantify the benefits of a 2GB card. 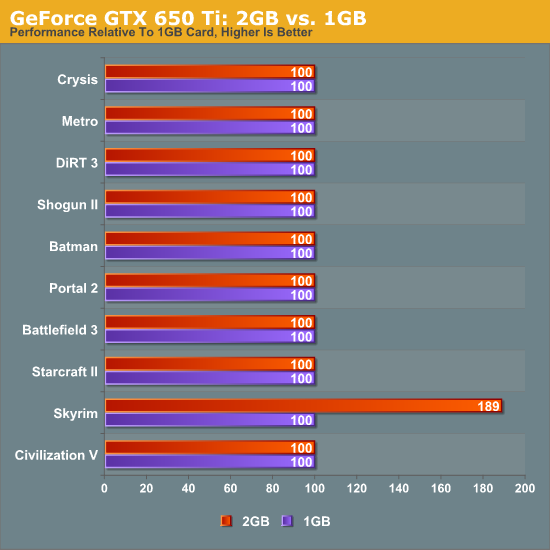 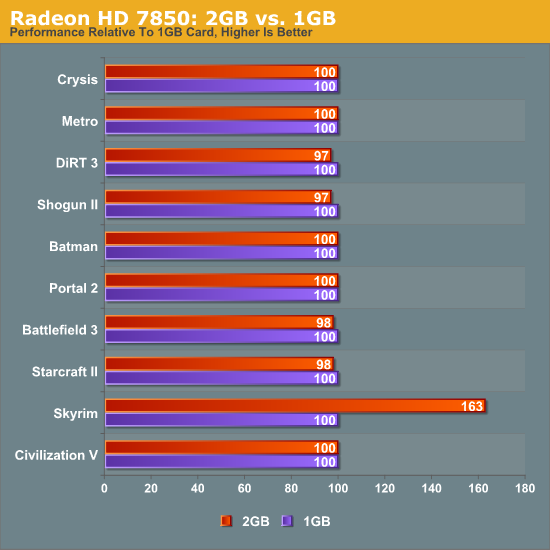 Regardless of whether we’re looking at AMD or NVIDIA cards, there’s only one benchmark where 2GB cards have a clear lead: Skyrim at 1920 with the high resolution texture pack. For our other 9 games the performance difference is miniscule at best.

But despite the open-and-shut nature of our data we’re not ready to put our weight behind these results. Among other issues, our benchmark suite is approaching a year old now, which means it doesn’t reflect on some of the major games released in the past few months such as XCOM: Enemy Unknown, Borderlands 2, DiRT: Showdown, or for that matter any one of the number of games left to be released this year. While we have full confidence in our benchmark suite from a competitive performance perspective, the fact that it’s not forward looking (and mostly forward rendering) does a disservice to measuring the need for additional memory.

The fact of the matter is that while the benchmarks don’t necessarily show it, along with Skyrim we’ve seen Crysis clobber 1GB cards in the past, Shogun II’s highest settings won’t even run on a 1GB card, and at meanwhile Battlefield 3 scales up render distance with available video memory. Nearly half of our benchmark games do benefit from 2GB cards, a subjective but important quality.

So despite the fact that our data doesn’t immediately show the benefits of 2GB cards, our thoughts go in the other direction. As 2012 comes to a close, cards that can hit the GTX 650 Ti’s performance level  are not well equipped for future with only 1GB of VRAM. 1GB is the cheaper option – and at these prices every penny counts – but it is our belief that by this time next year 1GB cards will be in the same place 512MB cards were in 2010: bottlenecked by a lack of VRAM. We have reached that point where if you’re going to be spending $150 or more that you shouldn’t be settling for a 1GB card; this is the time where 2GB cards are going to become the minimum for performance gaming video cards.

NVIDIA’s GTX 650 Ti launch driver is 306.38, which are a further continuation of the 304.xx branch. Compared to the previous two 304.xx drivers there are no notable performance changes or bug fixes that we’re aware of.

Meanwhile on the AMD side we’re using AMD’s newly released 12.9 betas. While these drivers are from a new branch, compared to the older 12.7 drivers the performance gains are minimal. We have updated our results for our 7000 series cards, but the only difference as it pertains to our test suite is that performance in Shogun II and DiRT 3 is slightly higher than with the 12.7 drivers.

On a final note, AMD sent over XFX’s Radeon HD 7850 1GB card so that we had a 1GB 7850 to test with (thanks guys). As this is not a new part from a performance perspective (see above) we’re not doing anything special with this card beyond including it in our charts as validation of the fact that the 1GB and 2GB 7850s are nearly identical outside of Skyrim.