If we discount the overall design and build quality, so far we’ve seen very good performance from the P170EM with some nice LCD options as well. As noted earlier, however, battery life is not one of the strong points of Clevo in general, and the P170EM falls far short of the competition. We’re dealing with an Enduro equipped notebook, so when the dGPU isn’t being used it’s totally powered off—and the same goes for the Optimus version. If we take the Samsung Series 7 and Alienware M17x R4 as our baselines for what to expect from a 17.3” notebook and factor in battery capacities, the P170EM and its 77Wh battery ought to be able to deliver somewhere between 293 to 439 minutes of idle battery life. The Alienware M17x actually isn’t all that optimized for power use, while the Samsung Series 7 is clearly tuned for power savings when set to the “Power Saver” profile. We set the P170EM for ~100nits (28% brightness in this case, which actually results in around 130nits—the next step down at 14% brightness gives 70nits, so we opted for a slightly brighter display) and ran our standard battery life tests… 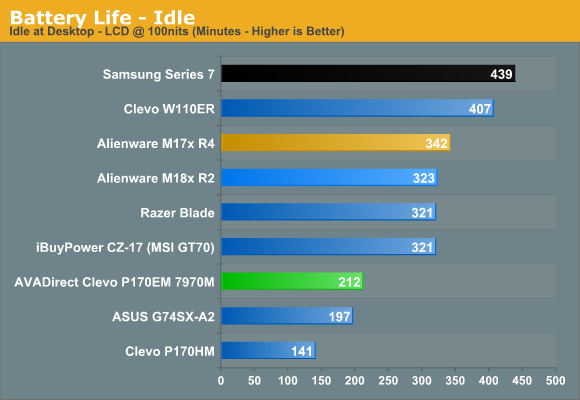 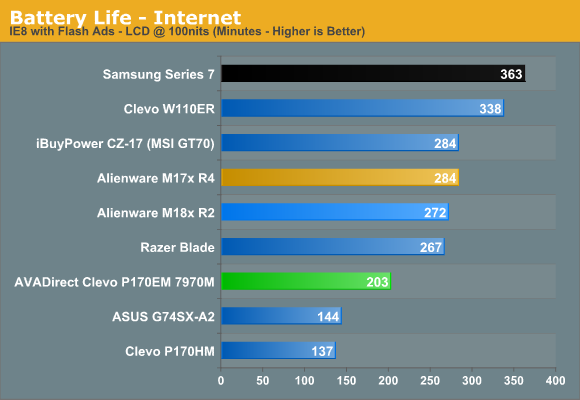 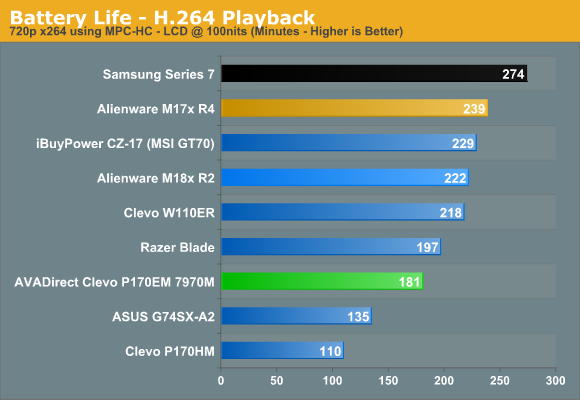 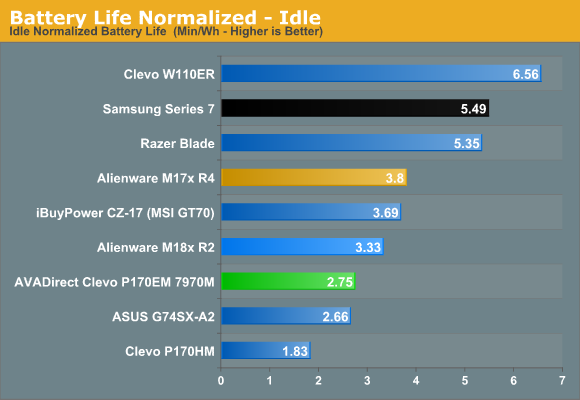 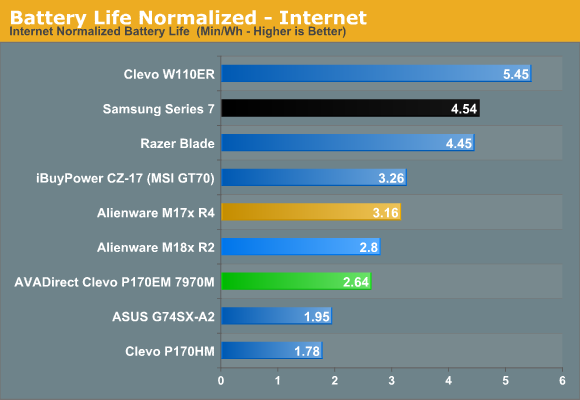 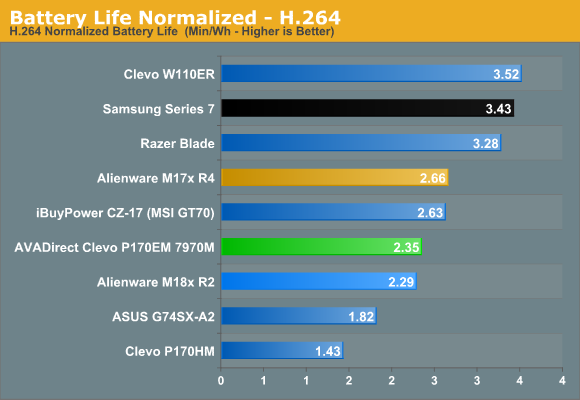 …And that’s what you get when a company doesn’t pay much attention to tuning a design for lower power use. What’s shocking is that the difference between our best-case Idle test and our worst-case H.264 test is only 31 minutes (17%); on the Alienware the difference between those same test results is 43% while on the Samsung it’s a whopping 60% difference. I’m not sure exactly what Clevo is or isn’t doing here; I’d assume some of this is just firmware/BIOS code, but it could be the motherboard capacitors, fans, routing of signals, etc. is simply not done efficiently. More to the point, it almost looks as though the dGPU isn’t powering down properly when it’s not being used. I have no way to really confirm that, but I would estimate the dGPU would use at least 10W of power at idle and that’s basically the difference between the P170EM and the Samsung.

If you really want to punish the battery, you could even try to run a game while unplugged. We set the system to the “Balanced” profile but set AMD’s PowerPlay to “Maximize Performance”, which basically means don’t limit the GPU clocks even if you’re on battery power. You basically get full gaming performance with these settings, but the battery only manages ~40 minutes before going dead. Not that we expect any better—we’re talking about a 45W TDP CPU and somewhere around 100W TDP for the HD 7970M, plus all the various other devices. All told, the estimated power draw for such a load is around 160W, and our real-world testing gives us a power draw of around 115W.

Battery life is a pretty serious disappointment, even for Clevo, but there are still some good elements to discuss. As big and bulky as the P170EM chassis is, you’d expect some good thermals—and it delivers. We ran the same stress test that we used on the Dell XPS 15 and Samsung Series 7—looping the x264 2nd Pass encode on six of the CPU cores while playing Batman: Arkham City at max details on the remaining two cores—and recorded CPU and GPU clocks. Unlike the Dell and Samsung offerings, we saw no evidence of CPU or GPU throttling with the P170EM. Here are the charts of the CPU/GPU clocks and the CPU/GPU temperatures during our two hour stress test, plus a screenshot from HWMonitor: 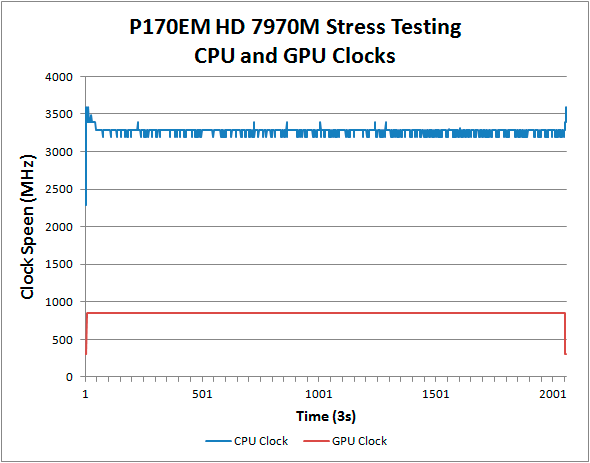 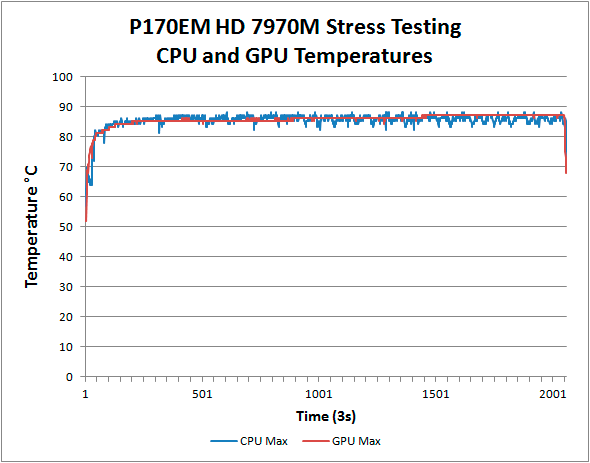 The maximum CPU temperature during our torture testing reaches 88C, which is quite good for a notebook running a high-end CPU like the i7-2720QM. Likewise, the maximum temperature on the HD 7970M is 87C. Those temperatures might not seem all that great until you consider that we’re running at 100% load for two hours with no throttling below the expected maximum turbo clocks (e.g. 3.2GHz on the CPU with all cores active). Clearly the large heatsinks, fans, and exhaust ports are doing their job, though they’re not particularly quiet.

At idle the acoustic noise measures 33.6dB from ~18 inches in front of the P170EM, under 100% CPU load the noise output reaches 38.7dB, gaming pushes the second HSF into action and we get 40.2dB, and during our full stress test we measure 42.4dB. While the idle and load noise levels are noticeable, the character of the noise isn’t all that bad, with a lower whooshing sound thanks to the size of the blower fans. Perhaps more importantly, there’s still another level of fan speed that we didn’t reach during our normal testing; when we set the laptop on our moderately shaggy carpet and covered the exhausts with our hands, after a few minutes of stress testing we were able to hit temperatures on both the CPU and GPU above 90C. The two fans operate independently, and when the CPU hit 90C the noise level jumps to 42.8dB; get the GPU to 90C as well and we get a worst-case noise result of around 46dB. Sure it’s loud at that point, but when the exhausts aren’t blocked the fans move a lot of air—it only took about five seconds after uncovering the exhausts for the temperatures to drop back down to the 85C range.