Below we have a diagram of a MOSFET (Metal Oxide Semiconductor Field Effect Transistor). When programming a cell, voltage is placed on the control gate, which forms an electric field that allows electrons to tunnel through the silicon oxide barrier to the floating gate. Once the tunneling process is complete, voltage to the control gate is dropped back to 0V and the silicon oxide acts as an insulator. Erasing a cell is done in a similar way but this time the voltage is placed on the silicon substrate (P-well in the picture), which again creates an electric field that allows the electrons to tunnel through the silicon oxide. 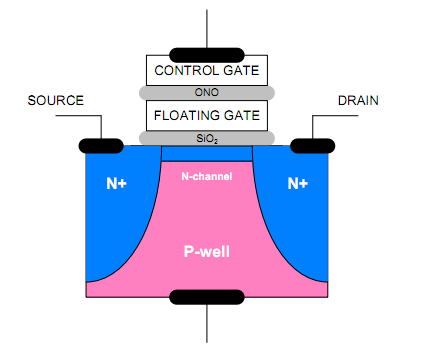 While the MOSFET is exactly the same for SLC, MLC and TLC, the difference lies in how the cell is programmed. With SLC, the cell is either programmed or it's not because it can only be "0" or "1". As MLC stores two bits in one cell, its value can either be "00", "01", "10" or "11", which means there are four different voltage states. TLC ups the voltage states to eight as there are eight different combinations of "0" and "1" when grouped in groups of three bits. Below are diagrams showing the graphical version of the voltage states:

The above diagrams show the voltages for brand new NAND—everything looks nice and neat and the only difference is that TLC has more states. However, the tunneling process that happens every time the cell is programmed or erased wears the silicon oxide out. The actual oxide is only about 10nm thick and it gets thinner every time a smaller process node is introduced, which is why endurance gets worse as we move to smaller nodes. When the silicon dioxide wears out, atomic bonds break and some electrons may get trapped inside the oxide during the tunneling process. That builds up negative charge in the silicon oxide, which in turn negates some of the control gate voltage when the cell is programmed.

The wear results in longer erase times because higher voltages need to be applied for longer times before the right voltage is found. Remember, the controller can't adjust to changes in program and erase voltages (well, some can; more on this on the next page) that come from the trapped electrons, cell leakage, and other sources. If the voltage that's supposed to work doesn't, the controller has to basically go on guess basis and simply try different voltages before the right one is found. That takes time and causes even more stress on the silicon oxide.

The difference between SLC, MLC, and TLC is pretty simple: SLC has the fewest voltage states and hence it can tolerate bigger changes in voltages. With TLC, there are eight different states and hence a lot less voltage room to play with. While the exact voltages used are unknown, you basically have to divide the same voltage into eight sections instead of four or two like the graphs above show, which means the voltages don't have room to change as much. The reason why a NAND block has to be retired is that erasing it starts to take too long, which impacts performance (and eventually a NAND block simply becomes nonfunctional, e.g. the voltage states for 010 and 011 begin to overlap).

There is also more and more ECC needed as the NAND wears out because the possibility for errors is greater. With TLC, that's once again a bigger problem because there are three bits to correct instead of one or two. While today's ECC engines are fairly powerful, at some point it will be easier to just retire the block than to keep correcting errors.