Based on my findings on the previous pages, as well as some additional off-the-record data, this is what I believe Swift looks like at a high level: 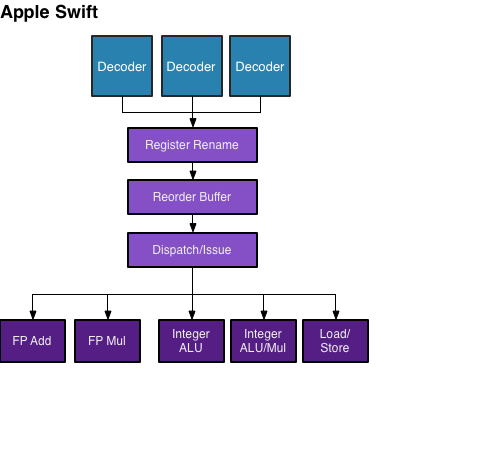 Note that most of those blocks are just place holders as I don't know how they've changed from Cortex A9 to Swift, but the general design of the machine is likely what you see above. Swift moves from a 2-wide to a 3-wide machine at the front end. It remains a relatively small out-of-order core, but increases the number of execution ports from 3 in Cortex A9 to 5. Note the dedicated load/store port, which would help explain the tremendous gains in high bandwidth FP performance.

I asked Qualcomm for some additional details on Krait unfortunately they are being quite tight lipped about their architecture. Krait is somewhat similar to Swift in that it has a 3-wide front end, however it only has 4 ports to its 7 execution units. Qualcomm wouldn't give me specifics on what those 7 units were or how they were shared by those 4 ports. It's a shame that Intel will tell me just how big Haswell's integer and FP register files are 9 months before launch, but its competitors in the mobile SoC space are worried about sharing high level details of architectures that have been shipping for half a year.

Apple's Swift core is a wider machine than the Cortex A9, and seemingly on-par with Qualcomm's Krait. How does ARM's Cortex A15 compare? While the front end remans 3-wide, ARM claims a doubling of fetch bandwidth compared to Cortex A9. The A15 is also able to execute more types of instructions out of order, although admittedly we don't know Swift's capabilities in this regard. There's also a loop cache at the front end, something that both AMD and Intel have in their modern architectures (again, it's unclear whether or not Swift features something similar). ARM moves to three dedicated issue pools feeding 8 independent pipelines on the execution side. There are dedicated load and store pipelines, two integer ALU pipes, two FP/NEON pipes, one pipe for branches and one for all multiplies/divides. The Cortex A15 is simply a beast, and it should be more power hungry as a result. It remains to be seen how the first Cortex A15 based smartphone SoCs will compare to Swift/Krait in terms of power. ARM's big.LITTLE configuration was clearly designed to help mitigate the issues that the Cortex A15 architecture could pose from a power consumption standpoint. I suspect we haven't seen the end of NVIDIA's companion core either.

At a high level, it would appear that ARM's Cortex A15 is still a bigger machine than Swift. Swift instead feels like Apple's answer to Krait. The release cadence Apple is on right now almost guarantees that it will be a CPU generation behind in the first half of next year if everyone moves to Cortex A15 based designs.