Despite all of the effort put into the iPhone 5, Apple has had its fair share of growing pains with the 5 design. The main thing here is definitely Scuffgate, which we'll get to in a moment, but it's not just that. My personal unit had an issue with the front glass not being properly mounted into the frame, something I tried to correct by just applying pressure until it clipped in, but it ended up unclipping again after some time. I'm not sure how widespread it is, but worth noting nonetheless. Add in the litany of other issues with the 5, including a fair number of nitpick-level complaints that SNL chose to poke fun at last weekend, and it's clear that this isn't a perfectly smooth launch.

Which brings us to Scuffgate, a two-fold issue that relates to the scratchability (scuffability?) of the new iPhone. Now, iPod users have been used to devices that are near-impossible to keep in decent condition for quite some time now. Any iPod with a chrome back (the first four iPod touches, all classic iPods, 1st and 3rd gen nano) is liable to scratch just by looking at it wrong, and there was actually a class-action lawsuit filed about this some time ago. But an iPhone that scratches easily is a pretty new phenomenon, which is why this is becoming a big deal.

These surface defects are commonly occurring on both black and white iPhone 5s, with the key difference being that the silver metal doesn't show imperfections nearly as much. The raw aluminum colour is a silver that's similar enough that unless you go hunting for it, in most cases you won't notice the texture difference. The black/slate 5s tend to show it pretty clearly though - the bright silver of the raw metal contrasts quite a bit with the dark finish, so even small imperfections tend to be high visibility. If you like to keep your phones naked (without a case or protective skin), I recommend going with the white 5. As sexy as the dark metal casing is, it starts looking a bit more low rent with a couple of scratches in it.

The other problem? People are having iPhone 5s delivered with noticeable scratches and dents, straight out of the box. Mine came with a couple of very minor ones that I only noticed after hunting for them, no big deal, but I've seen some aggrieved owners posting unboxing pictures showing relatively major surface flaws in the metal. In my opinion, this is the more concerning part of the "Scuffgate" equation. It's just not acceptable for significant surface defects to exist on brand new phones out of the box. With that said, I can understand how the 5 bodies are getting scratched in the factories. Let me explain, starting with the electrochemical anodization process for aluminum.

It works like this: the raw aluminum is submerged in an electrolyte through which a direct current is applied, growing an oxide at the anode electrode (the aluminum) and hydrogen at the cathode. Essentially, this is just a controlled electrochemical corrosion reaction. It results in the production of AL2O3, which we know as aluminum oxide (or α-alumina), along with a bunch of hydrons (H+) at the anode, plus dihydrogen gas (H2) at the cathode. The anode reaction looks something like this: 2 Al (s) + 3 H2O (l) = Al2O3 (s) + 6H+ + 6e-. As this process continues, a porous alumina film is created at the surface. This gives the slightly rough texture we're used to seeing on anodized aluminum products, but also allows for coloured dye to be poured in. The dye is then sealed into the material by putting the aluminum in boiling water. Professor Bill Hammack from the University of Illinois Urbana-Champaign biomolecular engineering department gives a pretty solid rundown of the basics in the video below, if you want a more visual explanation of the process.

Basically, the key to all this is the porous aluminum oxide layer. Based on the voltage, anodization time, and the specific electrolyte solution used, the depth of aluminum oxide created and size of the pores can vary. It's actually also possible to create a non-porous barrier-type alumina if an insoluble electrolyte is used in the anode, but that's a different story for a different time. Also, since this came up during the podcast and in the comments later, it's worth mentioning that aluminum reacts with air naturally to create a very thin oxide layer to protect the bare metal in a spontaneous mechanism known as passivation. By very thin, I'm talking on the ångström level - 50 of them, give or take. That's five nanometers, which is almost negligible, but more importantly, it's nonreactive to air beyond that so there is essentially no corrosion. This makes perfect sense if you think about how bare aluminum or any other raw metal reacts to air in purely physical terms, but it's always good to relate real-world observations to the chemical reactions taking place. Now, back to the various factors that dictate the properties of the anodization process - we don't have access to any of that information, beyond knowing that the specific aluminum being used is a 6000-series alloy. My digging suggests that it is likely some form of 6061, which is composed of 95.85%–98.56% aluminum, along with some combination of silicon, iron, copper, magnesium, manganese, chromium, zinc, and titanium, amongst other elements. It's hard to know exactly what Apple doing, but we're in a pretty good position to make educated guesses as to their methods and intentions. 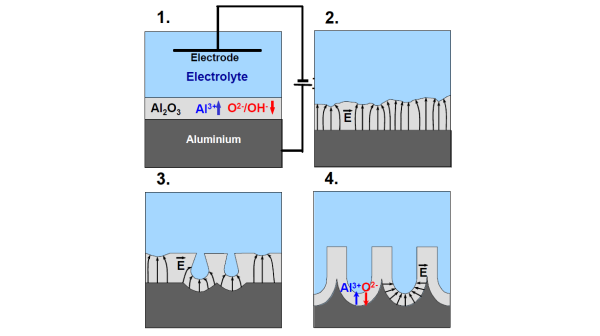 Apple has been anodizing handheld devices since the iPod mini debuted almost a decade ago, but obviously the process has been updated in the intervening years. The last notable change was a switch to an anodization process that resulted in denser pores around two years ago - it first showed up in the 2011 MacBook Pros and the iPad 2, eventually spreading to the rest of the lineup. The iPhone 5 takes that to a whole new level, with even finer and denser pores than I've seen used on any Apple product in the past (pore density is inversely proportional to pore size.) It's also a thinner metal than we've seen Apple use before. The material thickness for the iPhone 5 is just significantly thinner than they use on iPads or MacBooks, or even the old iPods that used anodized shells (iPod mini, 2nd, 4th, 6th generation nano, the last few iPod shuffles).

Which brings us to the next key detail with the anodization process: typically, the thickness of the anodization adds about half that thickness to the total aluminum thickness. So if you had an aluminum plate that was 1mm thick and added a 0.2 mm oxide, post-anodization, you would end up with a total material thickness of 1.1mm. With Apple trying to maintain as slim a profile as possible, it's in their best interests to have a relatively thin anodization. Given the graining of the anodization and based on what I've seen from scratching up my own iPhone 5, I think Apple's anodization process results in a super-thin alumina, something on the order of less than a hundred microns, at most; I'm estimating around 50-75um. (I'd also just like to note that in the process of this review, I took a jeweler's screwdriver to the back of my previously pristine iPhone 5. I love you guys, don't ever forget it.)

The oxide is even thinner on the bands, particularly the chamfers, which are just painted metal. So while the entire thing is easy to nick, it seems easiest to scratch off lots of paint on the bands, as well as the various metal edges. The soft-anodized surface is just a magnet. And the thing is, I'm not even sure they have the material thickness to oxidize more of the surface to get a more durable finish. The entire phone is so thin, and especially on the bands, I can't see a way for them to corrode any more of the aluminum than they already have without it raising questions about structural integrity. So, without very special care inside the factories, it's pretty easy to see how defects could occur. The rumors of Apple tightening down on quality control inside the iPhone 5 assembly factories comes as no surprise, since the 5 really does need extra attention to make it out of the factory unscathed.

So, are there any solutions to Scuffgate? Not really, or not anymore than there were with Antennagate. If you owned an AT&T 4, your only options were to put a case on it or just deal with the potential dropped calls. Here, your only options are to put a case on it, or just be very careful and deal with the potential scratches. If your phone came with defects out of the box, I'd just try returning it in hopes of getting a closer-to-perfect replacement unit. In the meantime, Apple needs to implement some controls internally to ensure that shipping devices don't contain any major surface-level defects. Maybe put some of those 29-megapixel cameras to good use. If Apple really wanted to fix it, they could put some sort of scratch-resistant polymer coating over the bare metal, but that'd absolutely ruin the surface feel. If I was Jony Ive, there's no way I'd let that happen, so until Apple changes up the design (like building antenna diversity into the CDMA 4 and 4S), we've just got to deal with it.