WiFi connectivity on mobile devices is something that has steadily moved forward, along with continual iterative inclusion of the latest Bluetooth standards for pairing with accessories. For a while now, we’ve seen more and more smartphones include 5 GHz connectivity alongside 2.4 GHz. Apple famously started the 5 GHz mobile device push with the iPad 1, but has taken its time bringing dual band WiFi to the iPhone while numerous other smartphones have included it. Thankfully, the wait is over and the iPhone 5 now includes single stream 2.4 and 5 GHz WiFi support. On 2.4 GHz, Apple continues to only let you use up to 20 MHz channels to improve Bluetooth coexistence, but has this time enabled short guard interval rates for a PHY of up to 72 Mbps. On 5 GHz side the iPhone 5 can support up to 40 MHz channels for a PHY of 150 Mbps. We will touch on real-world performance testing in a minute. 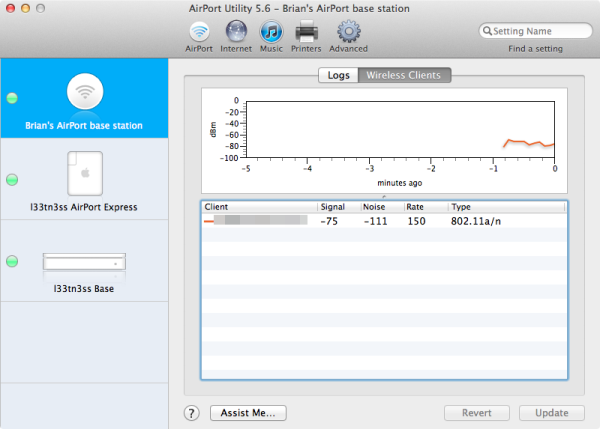 As we originally predicted, this connectivity comes courtesy of Broadcom’s BCM4334 802.11a/b/g/n, Bluetooth 4.0 + HS, FM radio combo chip which is built on the 40nm RF CMOS process. There are different ways you can buy a BCM4334, and for smartphones one of the most common is a ceramic package with the RF front end, all the filters, all the power amplifiers, and so forth in one ready-to-use package, which is what we see with the iPhone 5.

I’ve written before about the BCM4334 versus the 65nm BCM4330 which came before it and was in the iPhone 4S and numerous other devices. For a while now Apple has used Broadcom combos exclusively for iPhones and iPads, so BCM4334 isn’t a big surprise at all. The new module again offers a significant reduction in power consumption over the previous generation, all while making dual-band compatibility a baseline feature. We’ve already seen BCM4334 in a host of other smartphones as well. A lot of people had asked about BCM4335 and 802.11ac support, but it’s simply too soon for that part to have made it into this iPhone.

Adding 5 GHz WiFi support might sound like a minor improvement to most people, however its inclusion dramatically improves the reliability of WiFi in challenging environments where 2.4 GHz is either completely overloaded or full of other interferers. There have been many times at conferences and crowded urban locales where I’ve seen 2.4 GHz congested to the point of being unusable, and that will only continue getting worse. The far greater number of non-overlapping channels on 5 GHz, and propagation characteristics of that band, mean on average less interference at least for the time being.

As expected, in the WiFi Settings pane there is no mention of what channel the SSID you’re going to connect to is on. This follows Apple’s minimalist configuration modus operandi that has always existed for iOS — there’s no band preference 3 option toggle to be found in iOS like I’m used to seeing in Android for selecting Automatic, 2.4 GHz Only, or 5 GHz Only. Apple’s ideal WiFi use case is, unsurprisingly, exactly what the Airport base stations guide you into during standard setup — a single SSID for both 2.4 and 5 GHz networks. This way the client WiFi device uses its own handover thresholds to decide which one is best. If you’re running a dual band access point and intend to use an iPhone 5 with it, this is the ideal band plan Apple is not-so-subtly nudging you towards for the best user experience.

Nailing those thresholds is a hugely important implementational detail, one that I’ve seen many smartphones do improperly. Set incorrectly, the client WiFi device will endlessly chatter between 2.4 and 5 GHz at some places in the coverage profile, resulting in an extremely frustrating experience and lack of connectivity. Thankfully Apple has implemented this threshold very well based on lots of prior experience with the 2.4 and 5 GHz WiFi in iPad 1, 2, and 3. There’s enough hysteresis that the iPhone 5 isn’t constantly chattering back and forth, and in my testing the handover point as you move from near the AP on 5 GHz to spots far away where 2.4 GHz gets you better propagation is virtually impossible to detect. 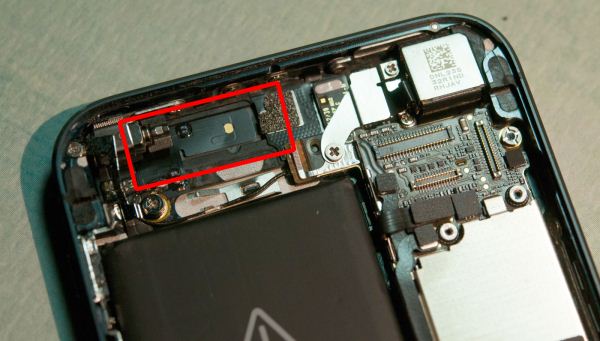 Before we finally get to throughput testing it’s worth noting the evolution in both that combo solution and antenna design plus gain that the iPhone has gone through in the last three generations. The iPhone 4 used the leftmost external notch antenna for WiFi, Bluetooth, and GPS. Famously, this wasn’t a very ideal design due to capacitive loading for both cellular and WiFi detuning the whole thing. Thus, the Verizon iPhone 4 and 4S this changed to an internal planar inverted F antenna (PIFA) which is extremely common in the smartphone space. The iPhone 5 continues this PIFA and internal choice but redesigns it once more. Apple is required to report gain and output power as part of their FCC filing, and we can see that 2.4 GHz gain is slightly improved on the iPhone 5, while gain on the 5 GHz band varies wildly across the various bands (which have different regulatory constrains).

In my not especially scientific testing watching the numeric signal strength reported in the place of the WiFi bar indicator, I saw the iPhone 5 routinely report the same number in the same place alongside the 4S when on 2.4 GHz. This isn’t surprising considering how close gains are between the two. Both also finally dropped my WiFi network at almost the same spot walking away from my dwelling.

When it comes to actual throughput I turned to testing WiFi using an iOS port of iPerf and measuring throughput from my server to the iPhone. I tested the iPhone 4, 4S, and 5 in this manner at 5 locations in my dwelling, 6 if you count to and from my office where 5 GHz is strongest. 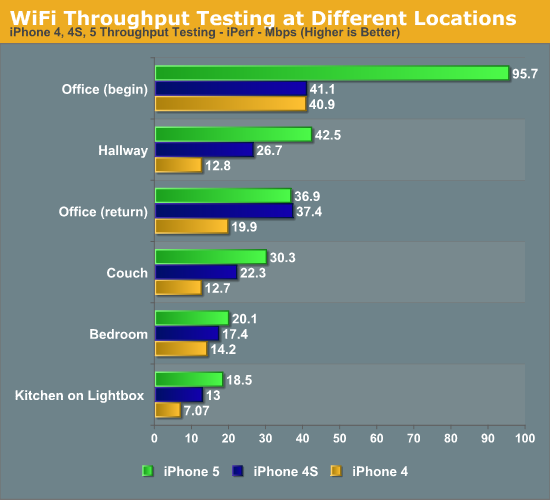 Starting in my Office where I have my Airport Extreme (5th generation) setup, we show throughput at 95.7 Mbps on the new iPhone 5. This is on a 40 MHz channel on 5 GHz, whereas the other iPhones are obviously on 2.4 GHz 20 MHz channels and both show almost the same throughput. The second location is my smaller hallway slash connecting room, where the iPhone 5 already hands over from 5 GHz to 2.4 GHz, from here on out results are on 2.4 GHz. As we move away (living room couch, bedroom, and in the kitchen on my lightbox) throughput decreases but the iPhone 5 still improves on the previous generation thanks to improvements made each generation to the entire stack. I immediately ran a test upon returning to office to illustrate the difference in adaptation time for each iPhone generation as they change MCS (Modulation Coding Scheme) for 802.11n. The iPhone 5 takes quite a while (on the order of minutes) to hand back up to 5 GHz upon returning to a region with strong 5 GHz signal. 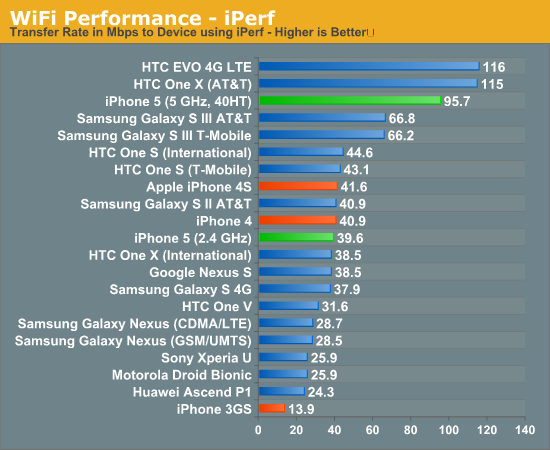 If we look at how the iPhone 5 compares in the best case testing graph I perform for all smartphones that cross my desk (using iperf), we can see that the iPhone 5 does pretty favorably. It still can’t unseat the MSM8960 based devices which use the onboard WLAN baseband in conjunction with WCN3660 (EVO 4G LTE and One X AT&T), but does beat other BCM4334 devices like the two Galaxy S IIIs.

The story here is almost entirely one of what interface is used. Obviously MSM8960 has an advantage with being entirely on-chip. Meanwhile iPhone 5 uses BCM4334 over HSIC which is analogous USB 2.0, and the other BCM4334 devices use SDIO from what I’ve learned. This is primarily why we see such a strong clustering of results around some values.

Overall the iPhone 5 offers an even bigger improvement over its predecessor than the 4S did when it comes to the WiFi and Bluetooth connectivity side. Inclusion of 5 GHz WiFi support has essentially become the new baseline for this current crop of smartphones, and I’m glad to see the iPhone include it.