Ravi and Marting gave some vague but still rather interesting performance data: 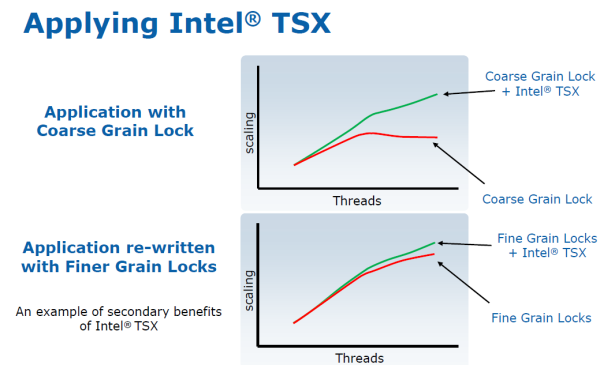 According to Intel, using an application that previously used a coarse grained lock (like the older MyISAM storage engines of MySQL) together with a TSX enabled library should improve scaling spectacularly. What's interesting is that even applications with finely grained locks should benefit from using TSX. As TSX uses the L1-cache to buffer the writes (David Kanter describes this in great detail here) and does not lock (unless re-execute/rollback takes place), there is less memory activity and especially less synchronization traffic. Or in other words, cache lines are less "thrown around".

There are some corner cases for which HLE/RTM will not work of course. The whole "CPU does the fine grained locks" is based upon tagging the L1 (64 B) cachelines and there are 512 of them to be specific (64 x 512 = 32 KB). There is only one "lock tag" per cacheline. More than one lock to the same cacheline will cause HLE/RTM to abort as the CPU cannot track the two locks separately in that case.

Second, all the "to be locked" variables of a TSX enabled piece of code must be placed into the L1-cache. If a piece of critical code needs to lock variables from more than 8 cachelines that all map to the slots of the same set, HLE is not going to work: the L1 is 8-way set-associative. Anything that interrupts the transaction will abort the transaction: non-maskable interrupts (interrupts that cannot be ignored), VM exits, faults...the list goes on. Still, there are many cases where TSX can definitely help, and code can be written to accommodate the requirements and limitations.

TSX will be supported by GCC v4.8, Microsoft's latest Visual Studio 2012, and of course Intel's C compiler v13. GLIBC support (rtm-2.17 branch) is also available. So it looks like the software ecosystem is ready for TSX. The coolest thing about TSX (especially HLE) is that it enables good scaling on our current multi-core CPUs without an enormous investment of time in the fine tuning of locks. In other words, it can give developers "fined grained performance at coarse grained effort" as Intel likes to put it.

In theory, most application developers will not even have to change their code besides linking to a TSX enabled library. Time will tell if unlocking good multi-core scaling will be that easy in most cases. If everything goes according to Intel's plan, TSX could enable a much wider variety of software to take advantage of the steadily increasing core counts inside our servers, desktops, and portables.