Even beyond the Ultra 160 SCSI controller, there’s also Texas Instrument IEEE 1394 (a.k.a. Firewire) controller on the K7T Master, above the PCI slots.  The only other motherboard we’ve reviewed that has the IEEE 1394 Firewire controller is the Microstar 694D Pro.  For users who are not familiar with Firewire, it is a high-performance serial bus interface that provides a high-speed data path between various systems and products such as PC’s and video devices.

You can use the IEEE 1394 Firewire right out of the box, as Microstar has included the proper adapter to provide the ports on the back of the case.  However, as you can see in the picture, the Firewire is a 2 chip solution, which will increase the cost of the motherboard considerably. 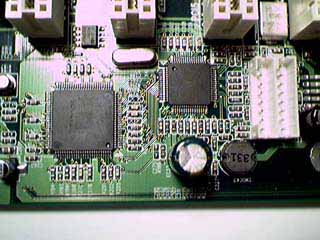 In the BIOS, users can also find the PC Health Status, which includes information on the CPU temperature, system temperature, and also the speed of two fans.  It also reports the voltage for the CPU and AGP.

The Microstar K7T Master uses the VIA VT1611A AC97 CODEC to provide some basic sound card features.  However, users who care about their 3D PC sound would definitely want a PCI sound card to get some higher quality sound effects.

Another feature of the K7T Master is the famous D-LED, which is placed between the serial / parallel and the sound / game port.  The 4 LED’s blink green and red during startup as different components on the motherboard is initialized.  When everything is done successfully, all LED’s will be green.  If there is a problem, the user can look at the pattern of the LED for troubleshooting.

Like the K7T Pro, Microstar also provides “Fuzzy Logic II” overclocking software with K7T Master.  This piece of software can help to overclock your CPU, by increasing the FSB of the motherboard one step at a time until the CPU is unstable, and then backing off a little bit.  This can all be done within Windows, which is good news for users who do not like to play around in the BIOS.

Another nice feature from Microstar is Live BIOS.  With the releases of Windows 2000 and Windows Millennium Edition, Microsoft makes the move to phase out the DOS command prompt, which is essential for traditional BIOS upgrades.  So Microstar uses the Live BIOS software to connect to the Internet, download the most updated BIOS, and perform the flash upgrades - all within Windows.  Although this is not very useful for non-Windows users, this is a good start for next generation operating systems.

Bundled with the K7T Master motherboard is a CD containing all the drivers and utilities for the motherboard.  They also include software like PC Alert, a PC hardware health monitoring software, and PC-Cillin, an anti-virus software.  The manual is a typical one, meaning that it lacks the instructions for first time users on how to install the motherboard, CPU, SDRAM, etc.  but it does provide detailed information on all connectors and jumpers.