Before we get into the performance results, a refresher: all eight fans on one chart for comparison. Note that if we're not taking noise into account, the highest static pressure fan should theoretically be the best performer. Our H80's fan settings are also only active with the stock fan; all others run at the full twelve volts.

As far as static pressure goes, most of these fans are hanging out in about the same neighborhood. Acoustically, only Corsair's SP120 High Performance and stock H80 fan are even rated to go above the noise floor of our sound meter, though it's clear the stock fan is designed to move heat as fast as humanly possible. Let's see how all of these theoreticals worked out in practice, though.

Ambient temperatures ranged between 24C and 26C, and the margin for error in results is roughly 1C. 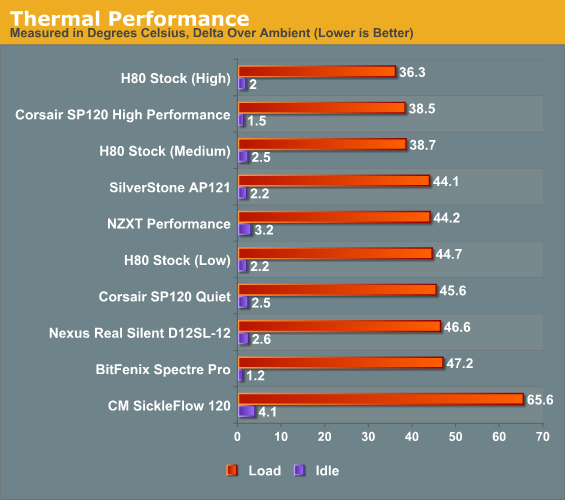 Thermally, if we ignore the H80's stock fan, the SickleFlow should've eaten the competition alive, but as it turns out CoolerMaster's specifications were more than just a little optimistic, as it was hands down the worst radiator fan we tested by a wide margin. If we organize the fans by rated static air pressure, they'd rank from best to worst: SP120 High Performance, SickleFlow 120, SilverStone AP121, SP120 Quiet, BitFenix Spectre Pro, Nexus Real Silent, and dead last, the NZXT Performance. As it turns out, though, only the SP120 High Performance really performs in line with its specifications; the rest just bunch up while the SickleFlow 120 is clearly the worst.

So how about acoustic performance? 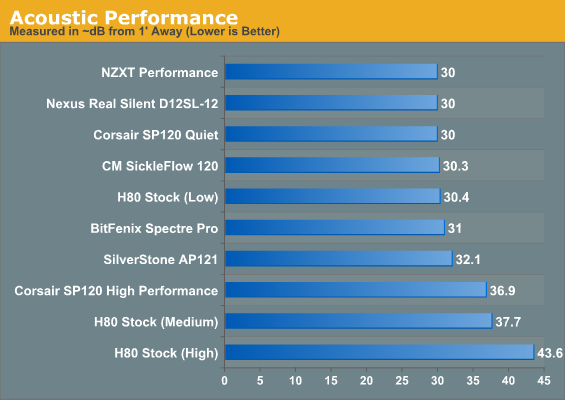 Well, at least CoolerMaster's fan is quiet while it cooks your processor. To get that great thermal performance from the SP120 and H80 stock fan, though, you're going to have to put up with some noise. Note that these are load noise readings; the H80 stock fan idles at or below our sound meter's 30dB threshold at Low and Medium settings while sitting at 34.3 dB at High.

Interestingly enough, despite having among the worst rated specs, NZXT's Performance fan seems to find the best balance between thermal performance and acoustics; Corsair's SP120 Quiet does little to justify itself over the stock H80 fan. Corsair's engineers also turned out to be mostly right on the money: the H80 stock fan by and large seems to be the best choice, at least for the H80 itself. Its Low setting is competitive with the other fans both thermally and acoustically, while its Medium setting is competitive with the SP120 High Performance fan. The High setting is essentially unnecessary.