The BIOS of a system is a measure of how much effort a manufacturer likes to put into every aspect of their design.  A good BIOS reflects commitment and perseverance to producing a good product versus just getting one out there into the market.  There is no use ever having one BIOS engineer on staff, even if a company only produces one motherboard.  The design of the BIOS has to come from multiple sources, and a creative piece has to come out which improves the user experience and the functionality, rather than being merely another check point on the list.

So here we are with the Gigabyte G1.Sniper 3 BIOS, which is essentially an identical replica of the BIOS we saw on the Z77X-UD5H reviewed recently, despite this motherboard being part of the gaming range of Gigabyte motherboards.  Our opening screen represents Gigabyte’s ‘3D’ mode screen, showcasing a representative motherboard on the screen.  Different parts of the image are clickable, which present menus for the specific areas of the motherboard.

While this is a good way to introduce users to the BIOS, it does leave several questions, as we raised with the Z77X-UD5H.  We have no text declaring which motherboard is being used (if the board is in a case), the BIOS version or the CPU.  The motherboard point is the most poignant, as Gigabyte use a generic motherboard image in their 3D BIOS rather than one specific to the motherboard at hand.  Other manufacturers also include information such as the temperatures, the memory count, memory speeds, voltages, and fan speeds on the front page – for Gigabyte’s model, we have to click through to find this information. 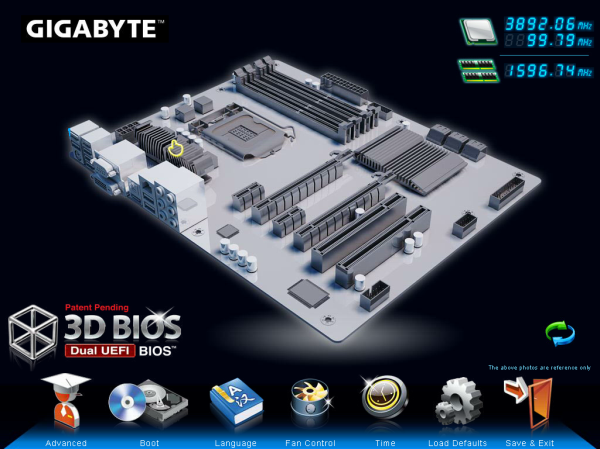 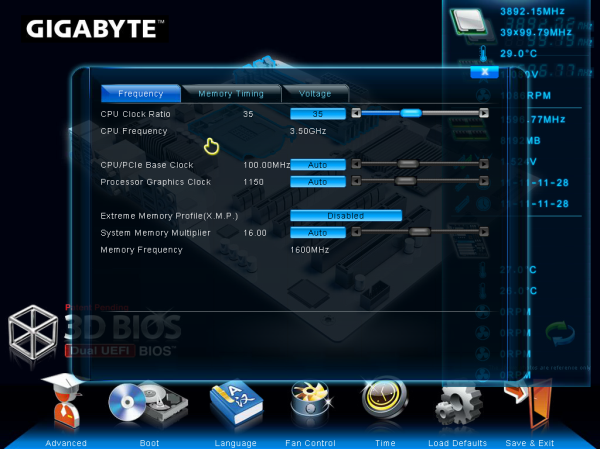 Users can also adjust the fan controls here, by clocking on the ‘Fan Control’ option on the menu at the bottom.  As mentioned in previous Gigabyte reviews, the fan controls on their boards are not the best by any stretch, as the options available to users consist of choosing a fan ramp in terms of PWM values per degree.  We would prefer options which relate to % fan speeds to temperature, with options to select initial and final temperatures and speeds such that the ramp was calculated automatically by the system.  In our review of Biostar Z77 motherboards, we at least got an automatic testing option to tell us which PWM values should be set, even if they are an arbitrary scale for the majority of users should they wish to delve in and understand what is being said. 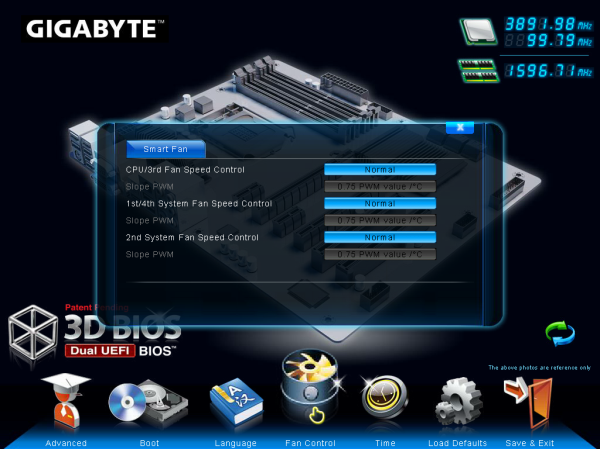 The main section of the Gigabyte BIOS is found in the Advanced option on the bottom row.  This pulls up a more vintage style BIOS scenario, easily navigable by both the mouse and the keyboard.  The first screen is labeled ‘MIT’, and we also get information regarding the BIOS version, the BCLK, memory size, temperatures and voltages here.  The MIT screen also has a ‘Current Status’ option which gives a more detailed overview of some of the more important numbers relating to the hardware in the system. 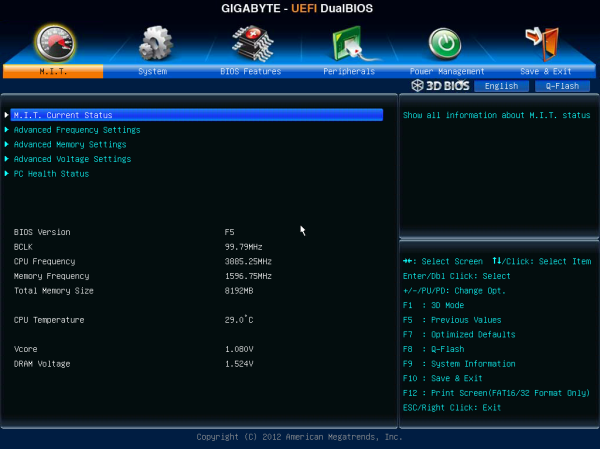 The overclocking options are found in a series of three menus from the MIT screen.  To adjust the CPU and memory frequencies, these options are found in the ‘Advanced Frequency Settings’ menu.  In the ‘Advanced Memory Settings’ screen, the memory frequency is again adjustable, but also the subtimings are adjustable here.  For voltages of the CPU or the memory, or other voltages in the system and Load Line Calibration settings, these are found in the ‘Advanced Voltage Settings’ menu.  It is a little frustrating having to navigate between several menus at once to pick the CPU speed, and then set the appropriate voltage and LLC.  I hope that in the future Gigabyte will make an all-in-one menu and have the appropriate options visible to see. 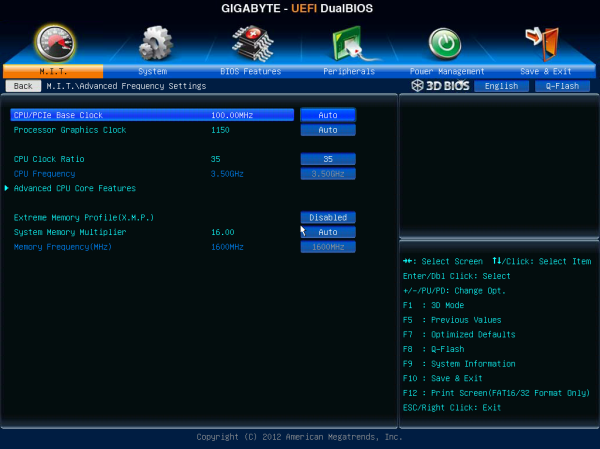 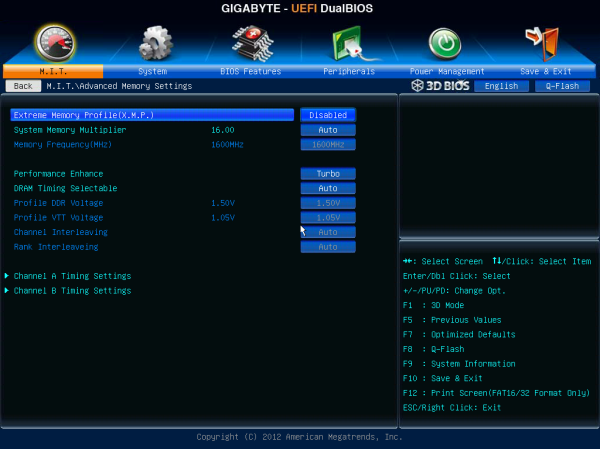 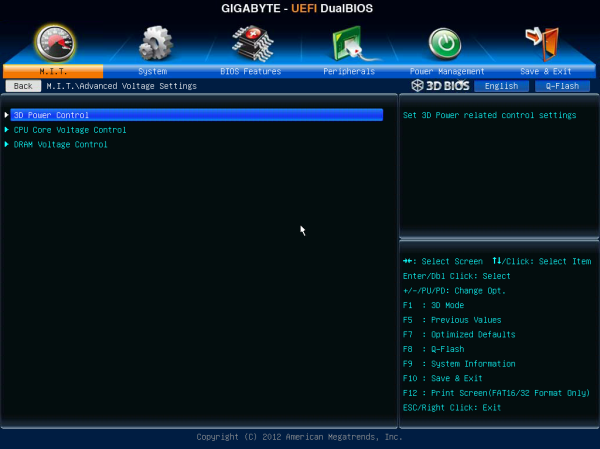 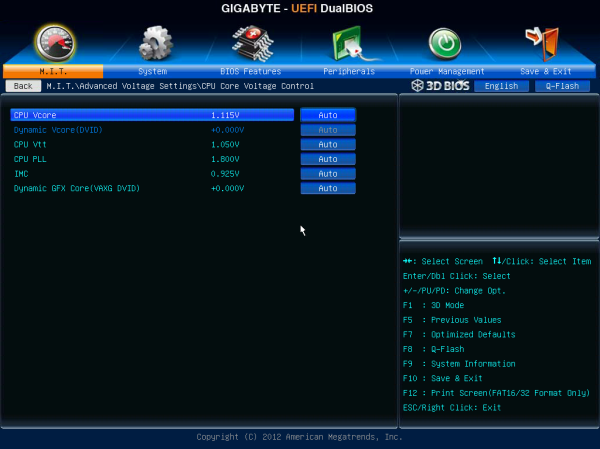 Elsewhere in the BIOS are the fan settings in a different menu format, as well as boot order selection, advanced peripheral management, and the BIOS flash utility.