The First TXAA Game & The Test

With the release of the NVIDIA’s 304.xx drivers a couple of months ago, NVIDIA finally enabled driver support on Kepler for their new temporal anti-aliasing technology. First announced with the launch of Kepler, TXAA is another anti-aliasing technology to be developed by Timothy Lottes, an engineer in NVIDIA’s developer technology group. In a nutshell, TXAA is a wide tent (>1px) MSAA filter combined with a temporal filter (effectively a motion-vector based frame blend) that is intended to resolve that pesky temporal aliasing that can be seen in motion in many games.

Because TXAA requires MSAA support and motion vector tracking by the game itself, it can only be used in games that specifically implement it. Consequently, while NVIDIA had enabled driver support for it, they’ve been waiting on a game to be released that implements it. That release finally happened last week with a patch for the MMO The Secret World, which became the first game with TXAA support.

This isn’t meant to be an exhaustive review of TXAA (MMOs and deterministic testing are like oil and water), but seeing as how this is the first time TXAA has been enabled we did want to comment on it. 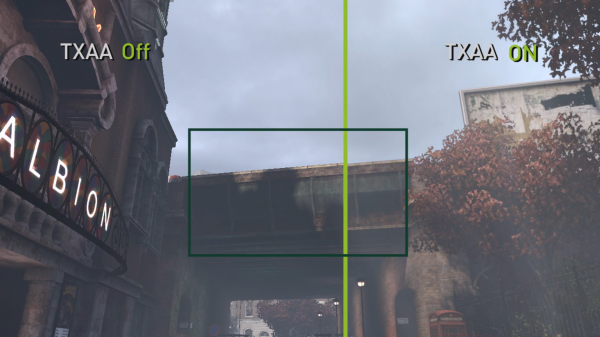 On the whole, what NVIDIA is trying to accomplish here is to implement movie-like anti-aliasing at a reasonable performance cost. Traditionally SSAA would be the solution here (just like it is to most other image aliasing problems), but of course SSAA is much too expensive most of the time. At its lower setting it is just 2x MSAA plus the temporal component, which makes the process rather cheap.

Unfortunately by gaming standards it’s also really blurry. This is due to the combination of the wide tent MSAA samples – which if you remember your history, ATI tried at one time – and the temporal filter blending data from multiple frames. TXAA does a completely fantastic job of eliminating temporal and other forms of aliasing, but it does so at a notable cost to image clarity.

Editorially speaking we’ll never disparage NVIDIA for trying new AA methods – it never hurts to try something new – however at the same time we do reserve the right to be picky. We completely understand the direction NVIDIA went with this and why they did it, especially since there’s a general push to make games more movie-like in the first place, but we’re not big fans of the outcome. You would be hard pressed to find someone that hates jaggies more than I (which is why we have SSAA in one of our tests), but as an interactive medium I have come to expect sharpness, sharpness that would make my eyes bleed. Especially when it comes to multiplayer games, where being able to see the slightest movement in the distance can be a distinct advantage.

To that end, TXAA is unquestionably an interesting technology and worth keeping an eye on in the future, but practically speaking AMD’s efforts to implement complex lighting cheaply on a forward renderer (and thereby making MSAA cheap and effective) are probably more relevant to improving the state of AA. But this is by no means the final word, and we’ll certainly revisit TXAA in detail in the future once it’s enabled on a game that offers a more deterministic way of testing image quality.

NVIDIA’s GTX 660 Ti launch drivers are 305.37, which are a further continuation of the 304.xx branch. Compared to the previous two 304.xx drivers there are no notable performance changes or bug fixes that we’re aware of.

Meanwhile on the AMD side we’re continuing to use the Catalyst 12.7 betas released back in late June. AMD just released Catalyst 12.8 yesterday, which appear to be a finalized version of the 12.7 driver.

On a final note, for the time being we have dropped Starcraft II from our tests. The recent 1.5 patch has had a notable negative impact on our performance (and disabled our ability to play replays without logging in every time), so we need to further investigate the issue and likely rebuild our entire collection of SC2 benchmarks.