This brings us to the deployment of the 7950B. As we mentioned before, these new specs are meant to be a drop-in upgrade for existing 7950 designs. Going forward, AMD is qualifying all 7950-class Tahiti GPUs for the new clockspeed/voltage combinations, and they have also qualified their reference PCB. So for partners building reference or semi-custom cards, they simply need to drop in the new BIOS, qualify their cooling solution for the slightly higher heat dissipation, and call it a day. Partners with fully-custom cards however will need to fully qualify their designs – the significance being that while any current 7950 design should be able to handle the higher clocks and power consumption, it’s not in any way guaranteed. If any partners did go with a custom design that only met the bare minimum standards for a 7950, then that design might have trouble with the higher specs of the 7950B.

In any case, all of this will end up being quite important to AMD’s partners and ultimately consumers because this isn’t just a new product; it’s a complete replacement for the 7950. Unlike the 7970GE, AMD won’t be introducing this supercharged 7950 as a product separate from the existing 7950, but rather the 7950B will become the new 7950. With the drop-in nature of the upgrade, once they’ve qualified their designs partners will simply continue producing their existing cards with the 7950B BIOS while the old 7950 will fades away. These upgraded cards in turn will be sold as the Radeon HD 7950, and with the exception of any clockspeeds listed on the box will otherwise be identical to their predecessors.

As for existing 7950 owners, because the 7950B hardware is identical to the original 7950 it’s technically possible to backport this upgrade to existing cards in a manner similar to how some users have loaded the 7970GE BIOS on 7970s. However at this time it doesn’t look like any of AMD’s partners will be releasing the new BIOS as an officially supported upgrade. This is not wholly surprising given the fact that existing 7950 cards haven’t been qualified for the new clockspeeds, so there’s no real guarantee that they’ll be able to handle it.

With no official support coming from partners, any upgrades will have to be done in an unofficial capacity. AMD is actually rather confident that most 7950s will be able to run at 7950B specs, so much so that rather than sampling new cards to the press they’re just giving us the 7950B BIOS to convert our 7950 samples into 7950B samples. Furthermore they’re also allowing us to post the 7950B BIOS, so that anyone else with a reference 7950 who wants to convert their card can go ahead and do so. It goes without saying that doing this will almost certainly void your warranty – and really most owners are going to be better off overclocking their 7950s the traditional way anyhow – but AMD is unofficially throwing this option out there for the owners that want to pursue it.

Thankfully 7950 reference cards come with a BIOS selection switch (the first time that has been of any real use on the 7900 series), so 7950 owners can always fall back to the locked BIOS if the BIOS flash fails or if they aren’t happy with the results. Users with custom cards on the other hand are effectively stuck for the moment; not only is the new reference BIOS unlikely to work on custom cards, but most custom cards do not include BIOS switch, so the entire process is far more risky.

With all of that out of the way, we have now reached the customary point of our review where we have to once again chastise AMD for their increasingly poor product naming. Admittedly we’re idealists here and we make no attempt to hide that, but this is unquestionably AMD’s most intentionally confusing product launch yet. If they want to replace the 7950 with a faster card we’re all for that… as long as they don’t call it the 7950.

As we’ve already stated, thanks to the choice of product name there’s going to be no easy way to tell apart old and new 7950 cards without looking at the specifications. And what of the fact that there is already 6 months' worth of 7950 cards in the wild with different specifications than the new 7950B? As always our worst fear here is that someone will buy a 7950 based on a 7950B review, meaning they won’t get the card they think they’re purchasing. More to the point, since when has it been a good idea or even reasonable to release two cards with the same product name?

Anyhow, to wrap things up let’s discuss pricing. Since the 7950B will be quietly replacing the existing 7950, it will be doing so at the same prices as the existing 7950. This means 7950B cards should hit the market at between $300 and $350, depending on the partner and whether it’s factory overclocked or not. As we’ll see the performance gains aren’t particularly great, so this is the best route for AMD to take regardless, but of course we’re always fans of more performance for free.

As for availability, AMD is telling us that cards will be available for sale by this Friday, coinciding with the importance of this week. Specifically, PowerColor, HIS, and Sapphire are all expected to have cards available. 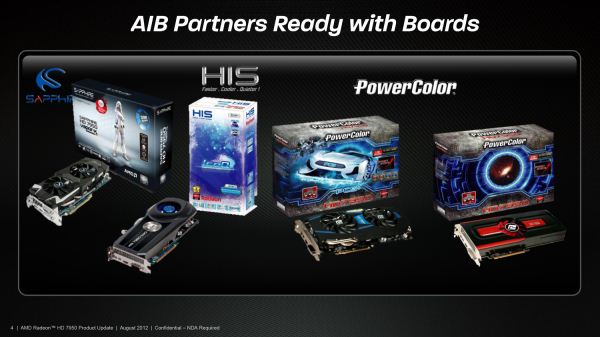 With that said however, because of AMD’s past product launches we’re left in an unfortunate position where we have to seriously question AMD’s credibility when it comes to product availability. To be blunt, in the last couple of months AMD has had major execution problems. Specifically, despite being announced back in June, the 7750 900MHz still has not seen a proper launch, and to this day AMD is unable to give us a good explaination for why. Meanwhile the 7970GE was supposed to be available in late June only to miss that by over a month, with cards only becoming available in the last two weeks. Because of AMD’s poor handling of those previous launches AMD’s credibility is on the line here – if they’re to maintain their credibility they can’t afford to mess up a third product launch. We’re definitely hoping for the best here, but right now all we can do is to wait and see what happens.

Based on these recent product launches and specifically how AMD is handling the 7950B, AMD is clearly flying by the seat of their pants here. And while that can work for a time there’s always a great risk of what happens if those pants rip.

Update 08/17: It looks like the 7950B launch will come with a happy ending. As of today there are cards for sale on Newegg, just as AMD promissed. However of the 4 cards AMD initially told us would be shipping, only the basic PowerColor model is available - and unfortunately it's priced like a factory overclocked card ($349). Of all the possible outcomes where cards went up for sale on time, this is basically the bare minimum AMD could have done. But nevertheless it counts, so we're happy to see that AMD's credibility is upheld.