On the Floor - Intel

Upon entering the show floor, it was quite apparent that many companies were able to make it out to display their technologies at IDF. Although the show space at IDF may not be as large as Comdex for example, there were still quite a few interesting demonstrations. Let's take a look at some of the more impressive ones.

As one would suspect, Intel had quite a presence on the show floor. Not actually on the show floor but rather in a separate room for press only, Intel demonstrated some new technology that they were working on. This display was an interactive demo room, with each of the Intel future products being available for short testing.

On one side of the room, Intel had a demonstration of "computer vision technology," implemented in its simplest form. This demonstration consisted of a series of games, each of which used an Intel web cam to "view" the player and make him or her an interactive part of the game. This allowed, for example, a game to translate a user's motion into actions, allowing the game player to slap the correct answer out of mid air. 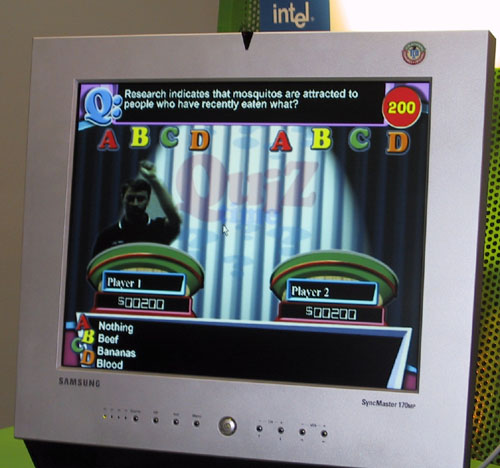 At the same press only event, we had an opportunity to look at another evolving technology from Intel. This demonstration allowed a user to control a receiver right from one's computer. Demonstrated in both Linux as well as Windows, the program communicated with the receiver via an attached cable. Intel hopes to integrate this signal in the receiver (or other devices') wall outlet jack, meaning that remote control from one's computer could be achieved simply by plugging a device in. Below is a picture of what Intel had set up. 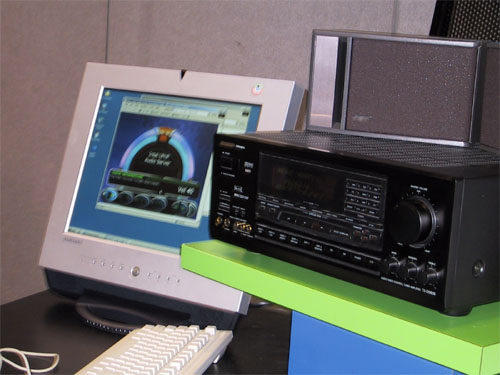 Once we hit the show room floor, we saw some more of Intel's offerings. On the Itanium front, Intel had quite a few servers equipped with Itanium processors inside. Perhaps one of the most interesting displays on the Itanium front came from the Microsoft booth, where a computer was featured running off an Itanium processor on "Windows 2000 Advanced Server, 64-bit Edition," as seen below.

For a final display of power, Intel had, among other things, a Pentium 4 system on display. Note the huge heatsink not only on the processor but also on the i850 memory controller hub. Rumor has it that these pieces get quite hot.

NUVIA Phoenix Targets +40-50% ST Performance Over Zen 2 for Only 33% the Power Intel Suffers Apparent Data Breach, 20GB of IP and Documents Leaked on to Internet