Without overvolting we were able to push our GTX 680 Classified an additional 100MHz(9%) on the core to 1211MHz. Given that we started with what was already a factory overclocked GPU, the fact that this is nearly 100Mhz beyond our next best card should come as no surprise. Binning doesn’t just isolate GPUs that can reach EVGA’s stock specifications, but it isolates those GPUs that can overclock better than the rest too.

Meanwhile on the memory front we were only able to push the memory a further 400MHz to 6.4GHz. This is noticeably less than what we’ve been able to push reference-based GTX 670/680 cards (which have reached nearly 7GHz), and it’s not immediately clear why we’re seeing this difference. With both a custom PCB and additional memory chips it’s possible that either one could be holding back memory overclocking, or more likely it’s a combination of the two. Regardless of the reason this does put the GTX 680 Classified in a bit of a bind, since the GTX 680 is no stranger to memory bandwidth starvation.

As for the impact of overvolting, unfortunately as it turns out overvolting didn’t greatly improve our results. With a core voltage of 1.275v (0.1v over stock) we were able to hit a base clock of 1286MHz, which is just 75MHz higher than what we hit on the stock voltage of 1.175v. In fact both in absolute and relative terms we gained more from our initial stock voltage overclock than we did from the overvolting overclock. Which is not to say that overvolting doesn’t help – clearly it does – but in our limited experience overvolting isn’t unlocking any kind of amazing clockspeed. It’s merely pushing GK104 a bit higher than it can go on stock voltage.

Memory overvolting doesn’t have a particularly great impact either. With a memory voltage of 1.65v we were able to squeeze out another 100MHz with the GTX 680 Classified’s 4GB of GDDR5. Much like the core overclock this is an improvement, but not greatly so.

Ultimately overvolting the GTX 680 Classified most certainly improves its overclockability, but at least on air you won’t be hitting any obscene clocks. Even then we don’t seem to be particularly temperature limited, so it’s not clear whether better (but not extreme) cooling would improve our overclocking results.

But before we jump into our results, there’s one more thing to take into consideration: that pesky power target. EVGA does have a higher power target, but even at 300W+ when using an increased power target, overvolting is going to quickly vault you towards it. The end result is that too much overvolting can make things slower, or at the very least limit the performance gains of what’s already a limited clockspeed increase.

The solution to this is EVGA’s BIOS switch, which effectively removes all of the power limits for the card, but this is not something to be used carelessly. Based on our temperature results with the stock BIOS there’s still some headroom, but the fact that this switch is labeled “LN2” is telling. Disabling all of the power limits is probably not a good idea on the reference cooler, at least in our conservative opinion.

So now that we’ve gone over overclocking in detail, what has it done for power temperature and noise? Let’s find out. 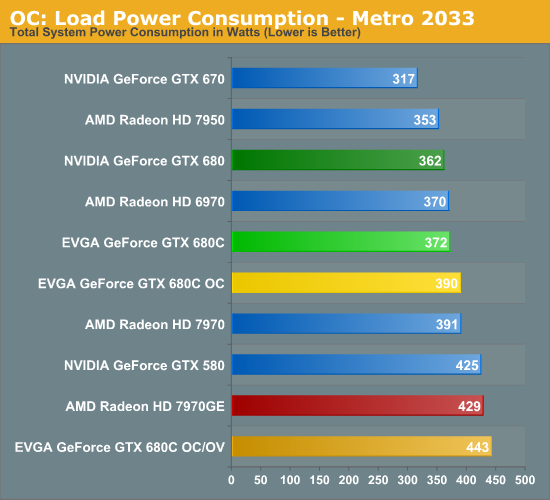 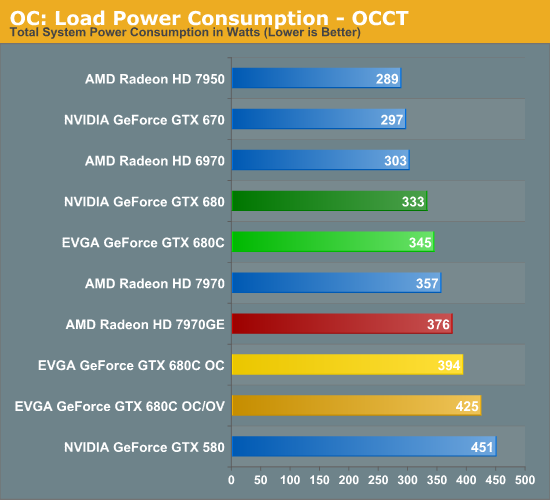 Pouring on the voltage significantly increases the power consumption however in both Metro and OCCT. With Metro our power consumption is now 443W at the wall, and with OCCT that’s 425W. This isn’t to say that the overvolting wasn’t worth it, but that additional 75MHz on the core clock and 100MHz memory clock has come with a significant cost. 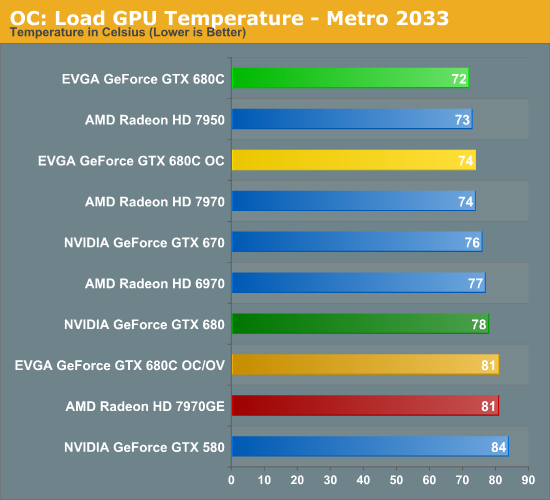 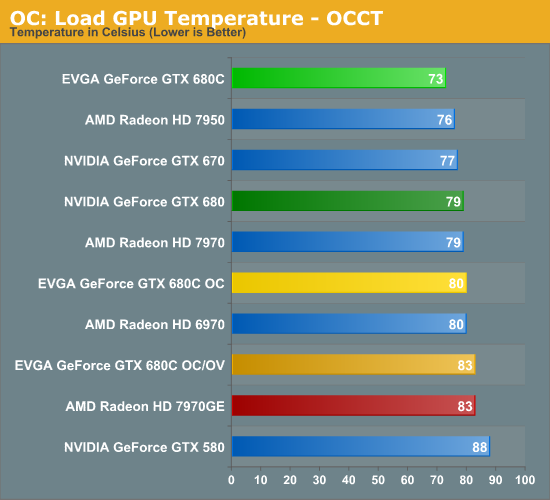 As to be expected, load temperatures end up reflecting our power consumption figures. Without overvolting we see a 1C increase under Metro and a 7C increase under OCCT. Overvolting pushes the GTX 680 Classified over 80C in all circumstances, topping out at 83C with OCCT. At only 83C there’s still some thermal headroom to play with here for overclocking, but at 1.275v we’re approaching the safe & sane limits for GK104. Users looking to push the voltage harder will want better cooling, but even better cooling may not be enough in the long-run. 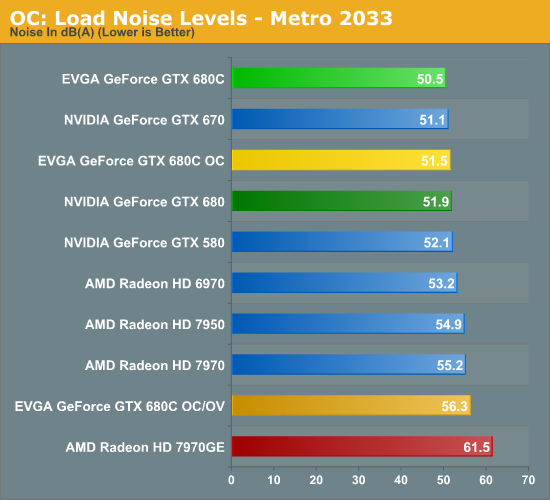 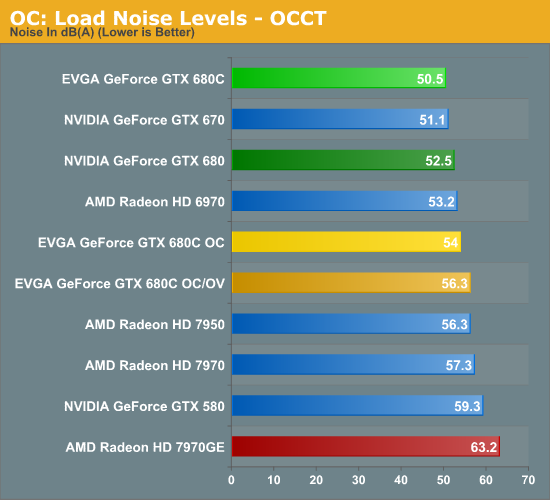 Finally we have our look at load noise. Without overvolting we see the overclocked GTX 680 Classified hit 51.5dB, which incredibly enough is still a smidge quieter than the reference GTX 680. For those of you looking for a fairly quiet overclocking card, the GTX 680 Classified is starting to look very good.

As for overvolting, in both Metro and OCCT cause our sample card to hit 56.3dB. This is understandably louder than the reference GTX 680 at this point, though in absolute terms whether it’s particularly loud or not depends on what you’re willing to put up with. The consolation prize here is that even with overclocking and overvolting it’s still 5dB+ quieter than the reference 7970GE.