As always, we’re wrapping up our look at a video card’s stock performance with a look at power, temperature, and noise. Officially AMD is holding the 7970GE’s TDP and PowerTune limits at the same level they were at for the 7970 – 250W – however unofficially because of the higher voltages, higher clockspeeds, and Digital Temperature Estimation eating into the remaining power headroom, we’re expecting power usage to increase. The question then is “how much?”

Because of chip-to-chip variation, the load voltage of 7970 cards varies with the chip and how leaky it is. Short of a large sample size there’s no way to tell what the voltage of an average 7970 or 7970GE is, so we can only look at what we have.

So how does this play out for power, temperature, and noise? Let’s find out. 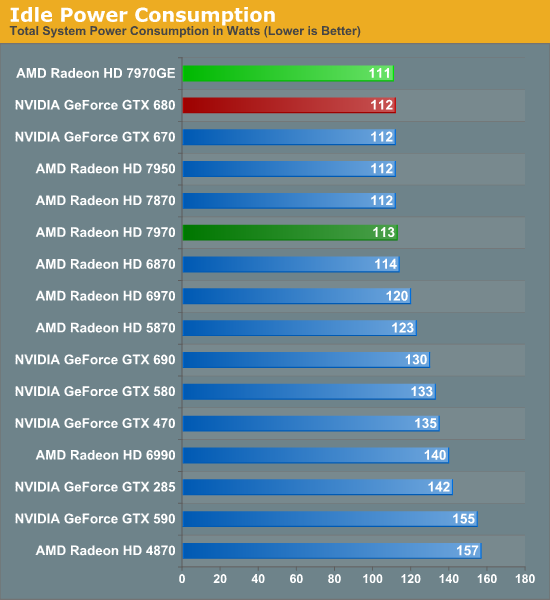 Starting with idle power, because it’s the same GPU on the same board there are no surprises here. Idle power consumption is actually down by 2W at the wall, but in practice this is such a small difference that it is almost impossible to separate from other sources. Though we wouldn’t be surprised if improving TSMC yields combined with AMD’s binning meant that real power consumption has actually decreased a hair. 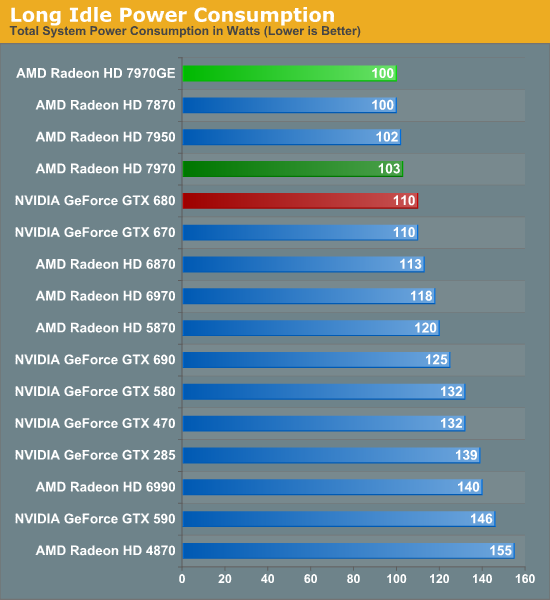 Similar to idle, long idle power consumption is also slightly down. NVIDIA doesn’t have anything to rival AMD’s ZeroCore Power technology, so the 7970CE is drawing a full 10W less at the wall, a difference that will become more pronounced when we compare SLI and CF in the future. 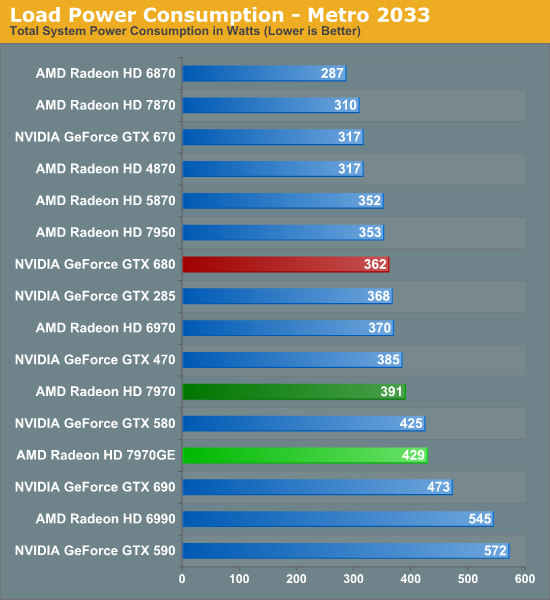 Moving on to our load power we finally see our first 7970GE power results, and while it’s not terrible it’s not great either. Power at the wall has definitely increased, with our testbed pulling 429W with the 7970GE versus 391 with the 7970. Now not all of this is due to the GPU – a certain percentage is the CPU getting to sleep less often because it needs to prepare more frames for the faster GPU – but in practice most of the difference is consumed (and exhausted) by the GPU. So the fact that the 7970GE is drawing 67W more than the GTX 680 at the wall is not insignificant. 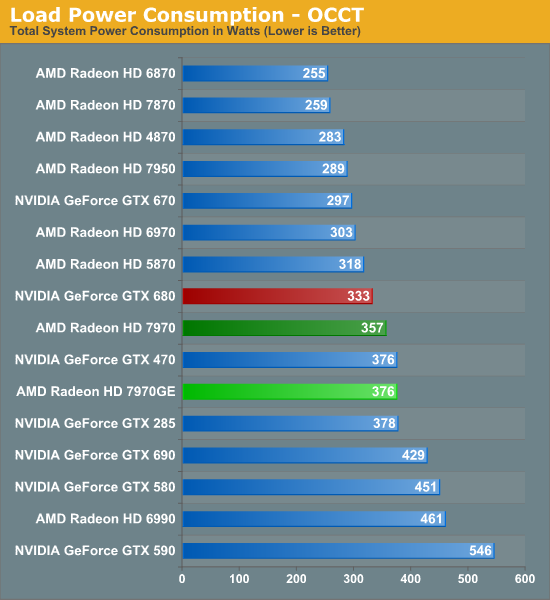 For a change of perspective we shift over to OCCT, which is our standard pathological workload and almost entirely GPU-driven. Compared to Metro, the power consumption increase from the 7970 to the 7970GE isn’t as great, but it’s definitely still there. Power has increased by 19W at the wall, which is actually more than we would have expected given the fact that the two have the same PowerTune limit and the fact that PowerTune should be heavily throttling both cards. Consequently this means that the 7970GE creates an even wider gap between the GTX 680 and AMD’s top card, with the 7970GE pulling 43W more at the wall. 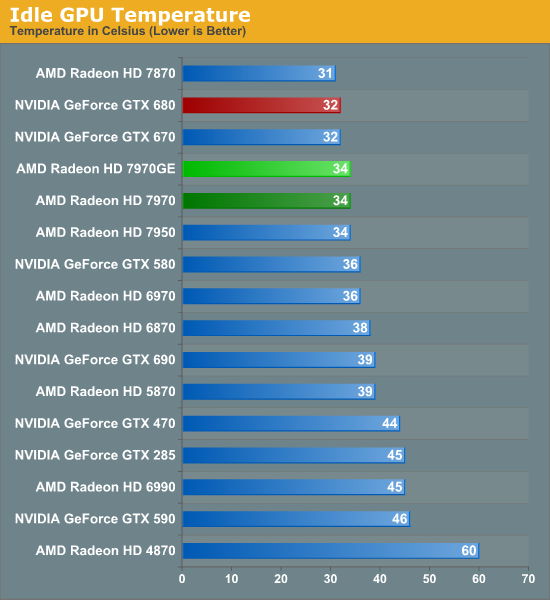 Moving on to temperatures, we don’t see a major change here. Identical hardware begets identical idle temperatures, which for the 7970GE means a cool 34C. Though the GTX 680 is a smidge cooler at 32C. 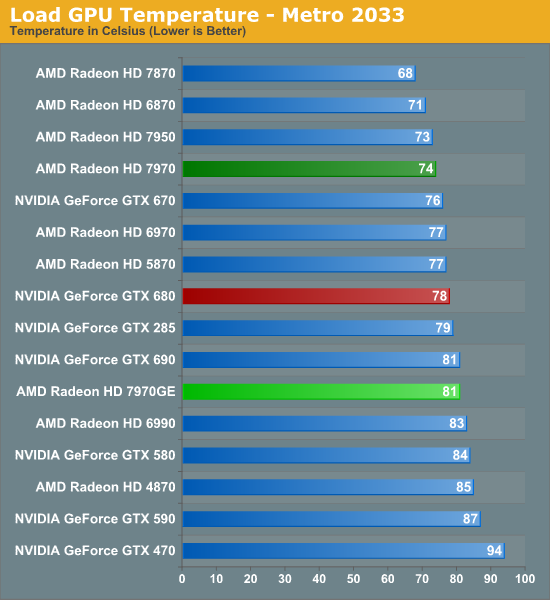 Since we’ve already seen that GPU power consumption has increased under Metro, we would expect temperatures to also increase under Metro and that’s exactly what’s happened. And actually, temperatures have increased by quite a lot, from 74C on the 7970 to 81C on the 7970GE. Since both 7970 cards share the same cooler, the 7970GE has to work harder to dissipate that extra power the card consumes, and even then temperatures will still increase some. 81C is still rather typical for a high end card, but it means there’s less thermal headroom to play with when overclocking when compared to the 7970. Furthermore it means the 7970GE is now warmer than the GTX 680. 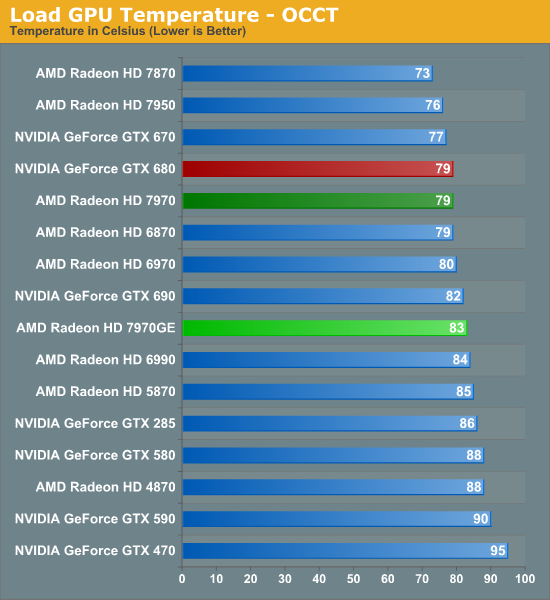 Thanks to PowerTune throttling the 7970GE doesn’t increase in temperature by nearly as much under OCCT as it does Metro, but we still see a 4C rise, pushing the 7970GE to 83C. Again this is rather normal for a high-end card, but it’s a sign of what AMD had to sacrifice to reach this level of gaming performance. 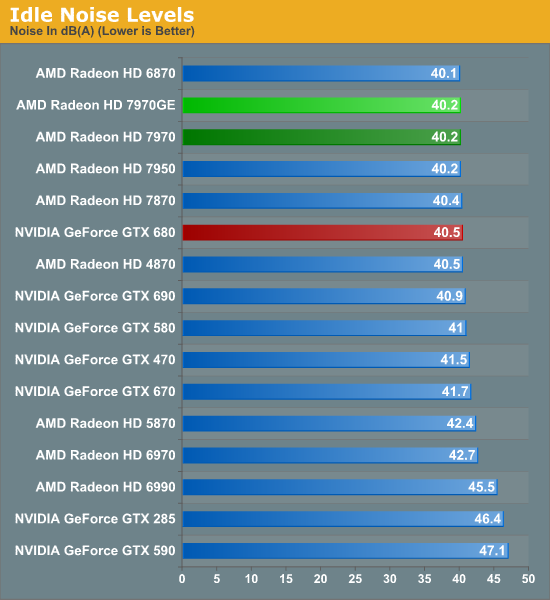 Last but not least we have our look at noise. Again with the same hardware we see no shift in idle noise, with the 7970GE registering at a quiet 40.2dBA. 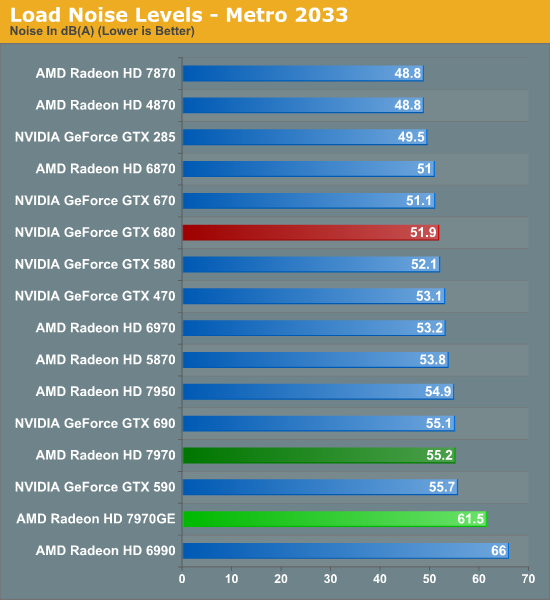 Unfortunately for AMD, this is where the 7970GE starts to come off of the rails. It’s not just power consumption and temperatures that have increased for the 7970GE, but load noise too. And it’s by quite a lot. 61.5dBA is without question loud for a video card. In fact the only card in our GPU 12 database that’s louder is the Radeon HD 6990, a dual-GPU card that was notoriously loud. The fact of the matter is that the 7970GE is significantly louder than any other card in our benchmark suite, and in all likelihood the only card that could surpass it would be the GTX 480. As a result the 7970GE isn’t only loud but it’s in a category of its own, exceeding the GTX 680 by nearly 10dBA! Even the vanilla 7970 is 6.3dBA quieter. 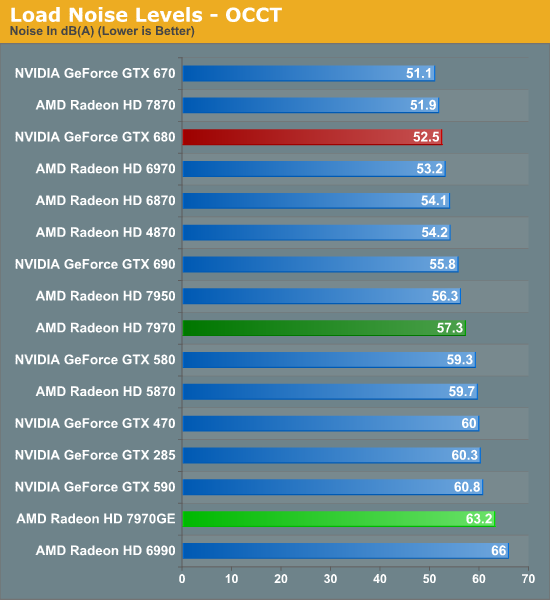 From these results it’s clear where AMD has had to make sacrifices to achieve performance that could rival the GTX 680. By using the same card and cooler and at the same time letting power consumption increase to feed that speed, they have boxed themselves into a very ugly situation where the only solution is to run their cooler fast and to run it loud. Maybe, maybe with a better cooler they could have kept noise levels similar to the 7970 (which would have meant it would still be louder than the GTX 680), but that’s not what we’re looking at.

The 7970GE is without question the loudest single-GPU video card we have seen in quite some time, and that’s nothing for AMD to be proud of. Everyone’s limit for noise differs, but when we’re talking about single-GPU cards exceeding 60dB in Metro we have to seriously ponder whether it’s something many gamers would be willing to put up with.