When the 2011 MacBook Pro hit I was so excited because it finally gave me a fairly portable chassis with my definition of a “fast-enough” CPU: a quad-core Sandy Bridge. As always, there’s a downside to being an early adopter. In this case the downside to buying Apple’s first quad-core notebook was that it got incredibly hot and was fairly loud at that. 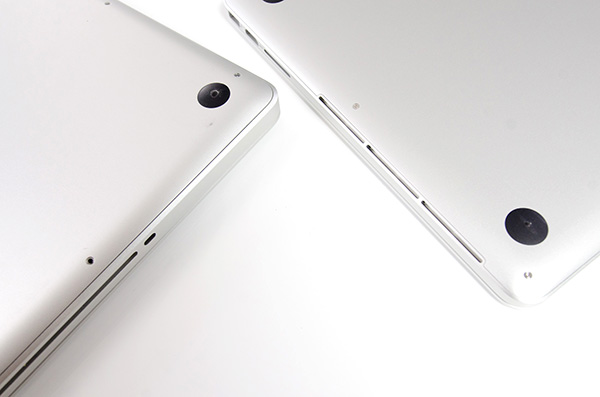 To understand the improvement that the Retina MacBook Pro offers over its predecessor we need to really understand where last year’s model suffered. To put things in perspective I created three experiments, two focused on the CPU’s thermal behavior and one on the CPU and GPU.

To start I took Cinebench and ran its single threaded test over and over again, plotting performance vs. number of runs. I ran the test for about 20 minutes before calling it quits. As you can see both the 2011 MacBook Pro and 2012 rMBP delivered consistent performance between runs: 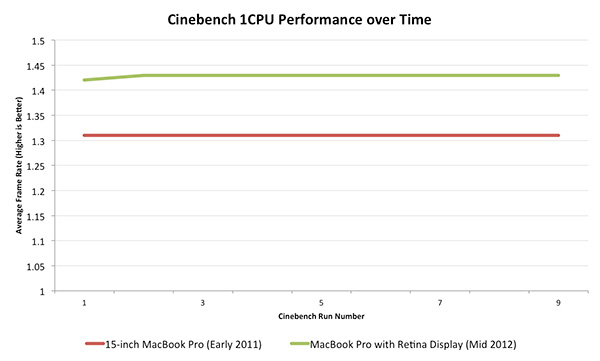 Subjectively, fan speed wasn’t an issue on either system during this test. The fans never ramped up to full speed on either machine, which tells me that despite the CPUs supporting Turbo Boost neither chip is actually dissipating all 45W allocated during this test. It’s possible the chips could be clocked higher, or just as likely that thermal hotspotting (dense areas of transistors that get too hot) is preventing them from running at higher frequencies - not the overall power budget of the chip.

The next test uses Cinebench but instead focuses on the multithreaded benchmark. Here all four cores (and eight threads) are engaged across both systems. I ran these tests, back to back, for around 20 minutes straight. Despite the increased load, neither system shows any throttling of performance: 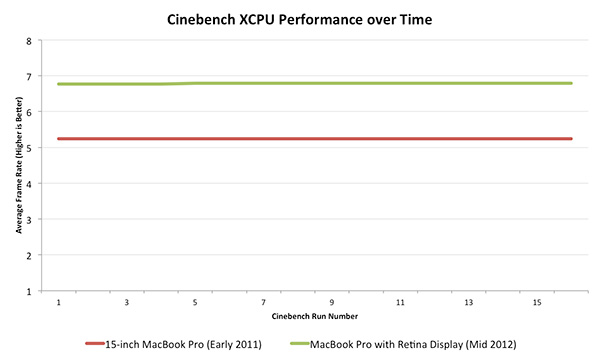 Fan speeds definitely ramped up here, stabilizing at their maximum spinning speeds of just over 6000 RPM. The Retina MacBook Pro is subjectively quieter but I’ll discuss that in greater detail shortly.

The final experiment focuses on a hardly stressful game by today’s standards: Half Life 2 Episode Two. Once again, for approximately 20 minutes I ran our standard macbench timedemo test in HL2. I ran both systems at 1680 x 1050, without AA, but with all other quality settings maxed out. This is a bit more stressful than 20 minutes of actual gameplay since the timedemo runs renders all frames as quickly as possible rather than playing back the demo in real time. In the end it worked out to be nearly 40 consecutive runs of our benchmark.

The graph below gives you an idea of what happens to performance over time: 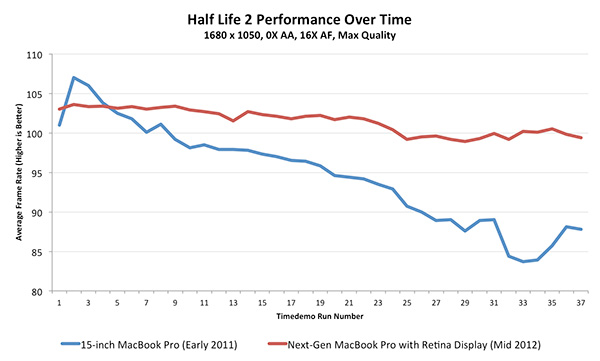 I’ve adjusted the y-axis on the chart to exaggerate the impact here a bit, but you get a clear idea of just how much heat both of these chips were putting out in the 2011 MBP. Either the CPU or GPU (or both) have to be throttled back over time in order to stay within their thermal and power budgets. As a result, in the 2011 15-inch MacBook Pro, performance drops by over 20% over the course of 20 minutes of this test.

The MacBook Pro with Retina Display, on the other hand, remains relatively stable across all runs. While its performance definitely dips, the impact is around 5% off of peak.

Intel and NVIDIA are really to thank here as both Ivy Bridge and Kepler are really mobile focused. Kepler in particular was a dramatic leap forward in power efficiency as we saw from our deep-dive on the architecture. Intel’s 22nm process, while relatively unimpressive on the desktop (a 10W savings isn’t anything to write home about in a tower) makes its first dramatic impact in the next-gen MacBook Pro.

Apple does play a role in the improved thermals of the Retina Display equipped MacBook Pro. Although very similar to the unibody chassis that Apple has been shipping for the past few years, the cooling system is significantly revamped. 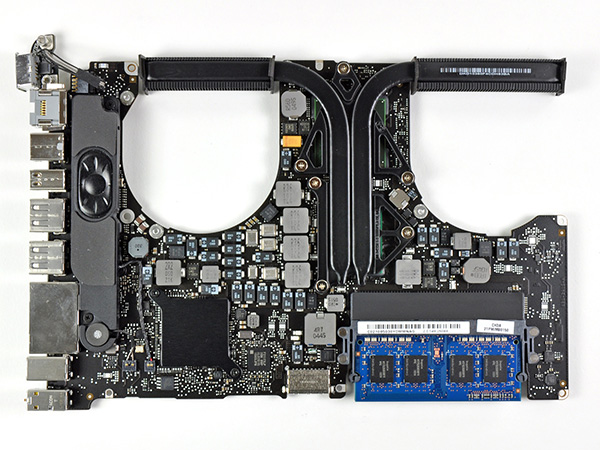 The previous generation 15-inch MacBook Pro featured two fans, each cooling a heatpipe that ran across the CPU and GPU. The two were treated as thermal equals with neither residing in the heat shadow of the other. By running both heatpipes over both chips Apple guaranteed equal cooling when both chips were active, or quieter operation when only one was doing significant work. With the traditional MacBook Pro design, air was exchanged in a single location: along the display hinge.

The next-gen MacBook Pro still retains the two fan design, but there’s now a single large heatpipe that runs across both the CPU and GPU. Heatsink thickness appears to have been reduced as well, a concession made in order to decrease the overall z-height of the rMBP. The entire construction looks far more MacBook Air-like, which makes sense given the design of the notebook.

Air is now moved through three sides of the notebook. Small slits on the left and right sides of the MacBook Pro act as intakes, while warm air is still exhausted out of the rear. 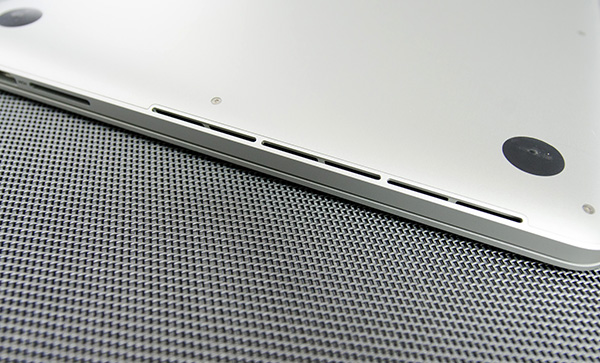 Apple also went to an new fan design with asymmetrically spaced blades. The idea is that by changing blade spacing you produce a sound that is spread out over more frequencies, and thus appears quieter.

The combination of silicon changes, side intakes and fan design results in three things:

1) Under light use the rMBP’s fans are virtually inaudible compared to the previous generation. In a quiet room you can still hear them spinning but it’s a significant improvement over last year’s model. Originally I thought the fans simply spun slower but running a light workload both last year's MBP and the rMBP spin their fans at 2000 RPM. The rMBP's fans simply sound quieter.

2) Under moderate use the fans in the rMBP are generally quieter than in the previous generation. Again this is likely due to the 22/28nm silicon in combination with the improved cooling system.

3) Under heavy use the rMBP fans are definitely audible, but the sound is different than what you get with the previous model. I was disappointed at first because I was expecting a dramatic reduction in noise, but instead I got the sort of improvement that you really notice once you go back to the older system.

To give you a sense of how the two sound I’ve embedded two audio clips of the 2011 15-inch MacBook Pro and MacBook Pro with Retina Display running a multithreaded Cinebench 11.5 test. In both clips you can hear me open the lid on the sleeping machine, quit open apps, use Spotlight to run Cinebench and click to start the benchmark (and click to repeat the test throughout the recording).

Neither system can make it through a single run of this test without ramping up the fans but note how quiet the Retina MBP remains in the early part of the test. Although the rMBP fans sound louder towards the end of the recordings, in person they actually sound quieter. Unfortunately I didn't have a good setup to really convey that.

Many have you have asked for specifics on thermal and acoustic performance. Here you go.

I ran both the upgraded 2011 MacBook Pro and Retina MacBook Pro through the same Half Life 2 torture test I described above, but at even more stressful GPU settings (1680 x 1050 with 4X AA enabled). I measured surface temperatures at the top and bottom of the notebook, as well as noise 3 inches above the trackpad on both systems. The results are in the table below:

In this particular test we see the two machines trade blows. The Retina MBP actually has a higher surface temperature on the top of the machine, but the underside remains significantly cooler. I believe the tradeoff is honestly worth it as the new machine has a tangible impact on how hot your lap gets. The Retina MBP is also noticeably quieter during this run, although it does technically let the GPU get a little hotter than last year's system. CPU temperatures are down considerably as well but we're also comparing 32nm vs. 22nm silicon at potentially different leakage levels.

Overall I’d consider the acoustic and thermal improvements here to be significant. Apple’s Phil Schiller got some of his strongest applause from the audience when he mentioned the fan design at the rMBP’s WWDC introduction. It’s attention to detail that Apple earns a lot of bonus points for; the fan design in the next-gen MacBook Pro isn’t revolutionary but it’s a tangible improvement that I can appreciate.