As expected, the next-gen MacBook Pro ditches mechanical storage in favor of a MacBook Air style NAND + SSD controller on a custom PCB. Apple refers to this solution as all-flash storage.

Apple’s distinction between Solid State Drives (SSDs) and all-flash storage boils down to what form the storage comes in. If it’s a standard form factor device in a chassis, it’s a solid state drive. If it’s just NAND + controller on a PCB? Then it’s all-flash storage. I suspect it’s a nicer way of saying proprietary SSD but either way they are technically the same thing, just in different forms.

My Retina MacBook Pro was the upgraded model with a 512GB SSD, featuring Samsung’s PM830 controller. This is the same controller as in the Samsung SSD 830, which I’ve long felt was the best pair for Mac users who wanted an SSD upgrade. I’m not sure if other Retina MBPs may come with Toshiba’s SandForce based drive instead. I have one of these drives in house for a review but that’ll have to wait until next week.

Although both the Samsung and Toshiba/SandForce controllers support full disk encryption, neither hardware based encryption is supported by OS X’s FileVault 2. When OS X encrypts your boot volume not all areas are encrypted (such as the recovery partition). While I know SandForce allegedly offers multiple encryption levels across a volume I’ve never seen either controller claim support for partially unencrypted volumes. In this case it looks like for Apple to take advantage of SSD controller based encryption it would need more flexible encryption support on the controller level. If I were an SSD controller vendor I’d be paying close attention to this requirement.

Both the Samsung and Toshiba controllers support 6Gbps SATA - as a result performance is significantly better compared to previous Apple branded SSDs. I borrowed a friend’s 2010 MacBook Pro which happened to have a Toshiba based SSD installed and ran it through our standard Iometer four-corners test suite. This was a well used drive and thus the performance is even worse than last year's MacBook Airs. The improvement in performance is astounding: 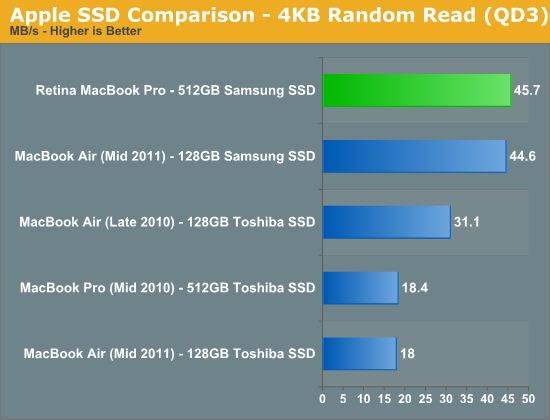 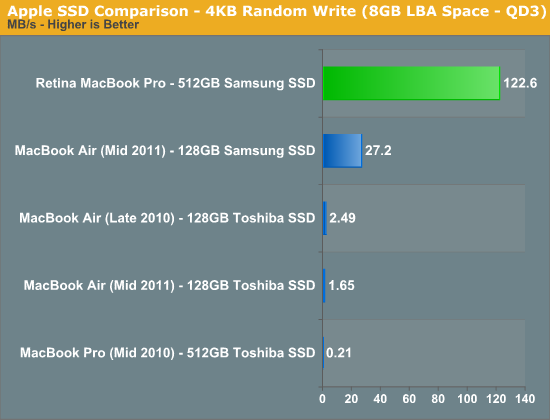 The move to 6Gbps SATA is often associated with a huge bump in sequential transfer rates, but in this case Apple enjoys a significant increase in random speeds as well. Note that some of this improvement is going to be due to the fully populated configuration of the PM830 in the Retina MacBook Pro's SSD, but that shouldn't downplay the significance of the move to Samsung's latest controller. The previous generation controller used last year just wasn't very good, and the Toshiba alternative was even worse. This year, Apple finally has a good solid state story to tell. 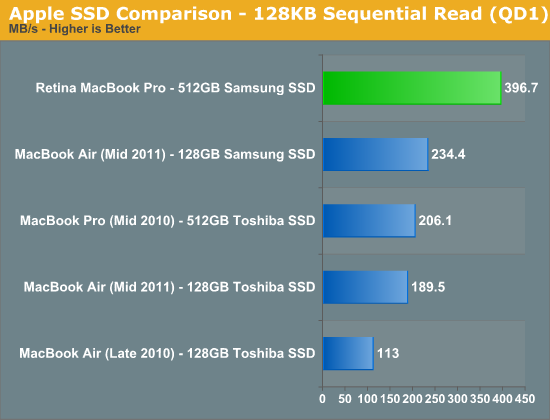 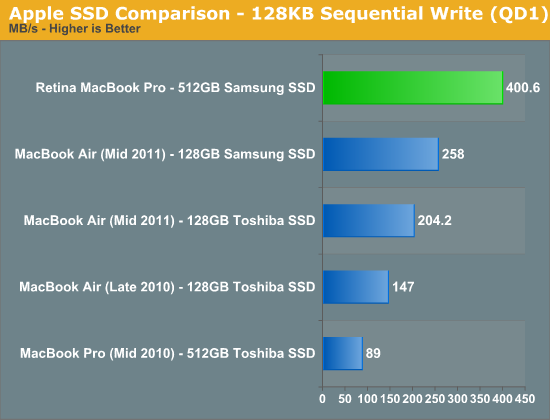 How much of this are you going to be able to actually tell in day to day use of the system? The sequential transfer rates are most tangible when you are writing to or reading large files like movies to your drive. Obviously you need a source that's fast enough to hit these speeds. Although USB 3.0 can come close you're unlikely to have a USB 3.0 SSD that's as fast as the internal drive. Moving large files between your internal SSD and Promise's Pegasus R4/R6 is where you'll really appreciate this performance.

The random access improvements are likely overkill for most normal uses. Things like program launches, compiling, web browsing, and any other normal application IO will depend on a mixture of random and sequential IO. The key is to have good enough random IO performance to avoid becoming a bottleneck. I can safely say that the numbers we see here are more than enough.

While previous Apple SSDs were nice only from a convenience standpoint, at least the Samsung option in the Retina MacBook Pro is what I’d recommend even if Apple didn’t bundle it with the machine.