What to look for in a KT133 Motherboard

Socket-A motherboards are a bit more difficult to shop for than Socket-370 boards, simply because some of the features we take for granted on Socket-370/Slot-1 boards aren't always easy to come by on their Socket-A counterparts.

The biggest feature that you'll want to look for is the ability to control the CPU's clock multiplier either within the BIOS or via jumpers/dipswitches placed on the motherboard itself. The first board we encountered that had this ability was the FIC AZ-11, which we modified in order to give us the ability to manipulate the clock multiplier of our Thunderbird/Duron processors.

If you're planning on overclocking your Thunderbird/Duron, you'll need to make sure that all of the "Golden Bridges" present at the L1 location on the chip itself are connected. We have been receiving reports that some currently available CPUs are shipping with these bridges cut, meaning there is no connection between the two points on each of the 4 "Golden Bridges." In order to do this, the most effective method seems to be using a conductive pen or conductive epoxy and a fine tipped needle to connect the two points on each bridge. Solder won't work since it won't adhere to the surface of the processor. You can pick up these conductive pens/conductive epoxy at most electronics stores. For more information consult our Thunderbird & Duron Overclocking Revealed article. 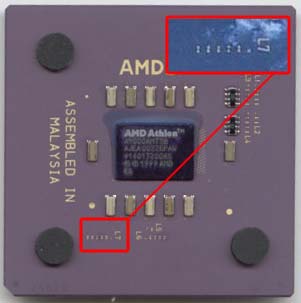 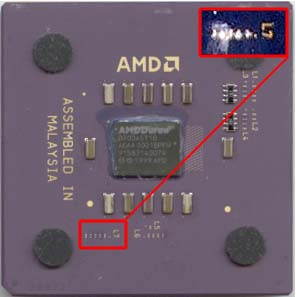 One thing that most KT133 based motherboards will have is the ability to adjust the FSB frequency; however, the KT133 chipset, like it's Slot-A counterpart (KX133), is currently limited to frequencies around 110MHz. Although there are some exceptions where users can push frequencies of 115MHz and higher, generally speaking, FSB tweaking isn't the best way to overclock your Socket-A CPU. If you're faced with no other options then it doesn't hurt, but be aware that there are better methods out there (i.e. multiplier adjustments).

Memory and peripheral expansion doesn't vary too much from one board to the next. However, the one thing that does seem to help boards stand out against each other is whether or not the manufacturer opted to make use of any external storage controllers. Since VIA's 686B South Bridge isn't readily available yet, motherboard manufacturers are turning to AMI, HighPoint and Promise to supply ATA 100 and ATA 100 RAID controllers for use with their KT133 motherboards. If you're interested in keeping your board for a long time, ATA 100 support may come in handy as future drives begin to require it. Currently, there's no real performance benefit that ATA 100 support will result in, but that will change as faster IDE drives hit the streets.

IDE RAID is another interesting feature that can help to get some pretty decent performance out of a pair of IDE drives. If you're not interested in the added performance benefits IDE RAID in mode 0 offers, then running in RAID 1 mode (mirroring) offers added security of a live backup drive. If you have enough drives, a combination RAID 0+1 setting gives you the best of both worlds.